It was already a surprising spring.

The vernal equinox – first day of the new season – arrived at 1:14 a.m. Eastern, the earliest in 116 years. And even that seemed late: spring peepers already singing as they messed about in the ponds around Scotiabank Place.

Crocuses up, shorts on, and the Ottawa Senators playoff bound when they were predicted to be golfing by the time the first daffodils rose along the Ottawa River Parkway. No wonder there was so much smiling in the town Macleans legendary columnist Allan Fotheringham always claimed "fun forgot."

But just as common sense argues that, in this part of the world, freezing temperatures are not yet history, neither is the regular season.

The Senators met the New Jersey Devils Tuesday evening in a match that both would have been well advised to win. Ottawa stood in seventh place in the Eastern Conference with 84 points, four points up on the Washington Capitals, six on Buffalo Sabres and eight on the Winnipeg Jets, who played Pittsburgh Penguins this same night and lost 8-4.

New Jersey, standing in sixth place with 87 points when the game began, could be more confident but hardly relaxed. Nine games – the number left for Washington, Buffalo and now the Jets – contain 18 points and, as the say in the age of NHL parity, anything can happen.

So far this season, it usually has.

The waning weeks of a season are the most unpredictable of all, however. It can be a time when, as Ottawa proved last year, depleted teams show surprising life, a time when, as Toronto Maple Leafs demonstrated Saturday against Ottawa and Monday against Boston Bruins, a team can be dominant one night, utterly depressing the next. Good teams glide, bad teams erupt, middling teams do not know from one night to the next what will become of them on the ice or, for that matter, in the standings.

Against the Devils, the Senators certainly showed more spunk than they had against the Leafs three days earlier. Perhaps it was because, as Ottawa captain Daniel Alfredsson wryly pointed out, "New Jersey doesn't have a custom of bringing their fans here."

The 19, 834 overwhelmingly-supportive Ottawa fans, however, could not take the penalty shot for Erik Condra, who was hauled down on a breakaway 14 minutes into the game. When Condra was given a free chance by the officials, he attempted a weak five-hole shot on Devils' goaltender Johan Hedberg and a golden chance was lost to get that all-important first goal.

Instead, first blood went to the Devils when, courtesy of a dumb penalty for kneeing to Ottawa's Zenon Konopka, Ilya Kovalchuk scored on the power play with a powerful blast from the point. It was Kovalchuk's 31st goal of the season.

It was all that was required, the Devils winning 1-0.

The Senators clearly missed Jason Spezza, the team's leading scorer with 75 points. Spezza, who would have played his 600th game this night, was out with the flu. His more than a point-a-game average (607 points on 221 goals and 386 assists) might have been pivotal in turning this sloppy match into something more exciting neutral zone traffic jams and dump-and-chase attacks.

The Senators, after all, were playing a New Jersey team weary from its third game in four nights, a 5-2 loss Saturday to the Penguins and a brawl-filled 4-2 loss Monday to the New York Rangers. If ever a team was ripe to be picked apart, this was it.

But Ottawa suffers from its own difficulties, namely a limp power play that was 0-for-18 over its previous five games and is now 0-for-21 despite two very late power plays and a 25-second 5-on-3 advantage.

Ottawa goaltender Ben Bishop, playing only his seventh game as a Senator since coming in a late trade with the St. Louis Blues, was again impressive, especially on a third-period New Jersey power play, but he could do nothing to solve the suffocating Devils' defensive system.

And the Ottawa power play, of course, could do absolutely nothing.

But then, as they say this time of year, hope springs eternal. 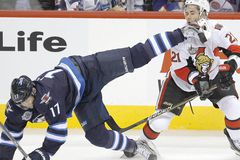 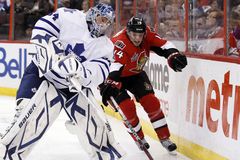 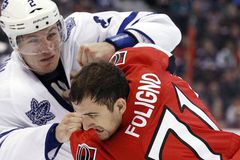