There are two certainties in every NHL season: The visor debate will be resurrected when someone gets hit on or near an eye by a stick or a puck and there will be players who offer all sorts of reasons why they refuse to wear one.

Here is what Calgary Flames veteran Steve Begin had to say after the debate was renewed almost two weeks ago when New York Rangers defenceman Marc Staal was hit on the eye by a puck: "When I was 22 and playing in Saint John, I broke my nose and got a cut under my eye. I put a visor on and a puck deflected up under it and got me under the other eye. It should be up to the players if they want to wear a visor. I've never felt comfortable wearing it. … But if I have to wear one, I'd wear one."

The day when Begin and the rest of the 27 per cent of the NHL's 740 players who still do not wear an eye-protector on their helmets are forced to do so may be approaching faster than they think. And it will be the insurance industry calling the shots, not the NHL, which has long wanted to make visors mandatory but cannot because the NHL Players' Association prefers the matter to remain a personal choice.

Lalita Mohabir is a senior personal accident underwriter at Burns & Wilcox Canada. Her company has medical insurance policies with more than 24 minor-league and NHL players that cover them in the case of serious and career-ending injuries. Mohabir says Burns & Wilcox will not insure any amateur players who buy a policy unless they wear a mouthguard and a visor and any NHL player looking to supplement the coverage supplied by the league with a personal policy will soon be told he must do the same or be denied coverage.

"We are getting tougher in terms of any hockey leagues we're quoting on or any individual we offer coverage on," Mohabir said. "We are indicating we require mandatory use of a visor. We started doing this [before] Marc Staal got injured.

"Going through to the NHL, we have not requested this as yet but we will be doing that. When we look at a player fracturing a hand or bruising a knee it's quite different than the loss of an eye. The loss of an eye is a career-ending injury."

Aside from the common sense of protecting a player's eyesight in a league where the game has never been faster and sticks and pucks routinely fly around players' heads, the insurance industry is simply reacting to the economics of the matter. With players like Shea Weber, Ryan Suter and Zach Parise signing NHL contracts worth more than $100-million (all currency U.S.), even one catastrophic injury could wipe out much profit in what Mohabir says is (so far) a profitable line of policies.

The question of making American Hockey League, ECHL and amateur players wear visors or forego any insurance payments is moot since using them is mandatory in those leagues. But the NHL, home to the highest-paid players in the world, remains the most notable holdout.

Mandatory equipment use falls under the collective agreement in the NHL and visors were only discussed briefly in the talks that led to a new agreement in January. The NHLPA, which takes its orders from the players, is not ready to legislate visor use.

Its only comment on the matter comes from former player Mathieu Schneider, special assistant to NHLPA executive director Donald Fehr: "While the players support visor use being a matter of individual choice, we continue to regularly educate the players on the benefits of wearing a visor so that each player can make an informed decision. We will further discuss visors … at our player meetings this summer."

It is hard to say if the NHL players are being educated by their union or by frightening examples like Staal, who is expected to fully recover from his injury but has yet to play since he was hurt on March 5. There is also the positive example of New Jersey Devils defenceman Peter Harrold. He was struck on the visor by a shot Saturday night and left the game streaming blood from a cut on his forehead. Thanks to the visor, though, he was able to return to the game after being patched up.

Either way, more NHL players are putting on visors. The NHLPA's numbers show that 73 per cent of its members now wear them, up from 34 per cent in the 2003-04 season.

Mohabir says she has not talked to any of her competitors in the sports insurance field but "I do feel they will be taking this stand as well."

If they do, Montreal Canadiens forward Travis Moen, who gave up eye protection when he graduated from junior hockey, would grudgingly go along.

"I wore one when I took a skate over the eye [in 2010]," he said. "It took some time to get used to; I haven't worn one for 12 years now, so there would be an adaptation … but I'm not one of the guys who would refuse to wear one regardless. If everyone had to put them on, I would." 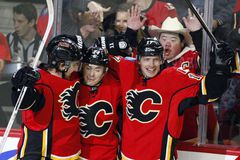 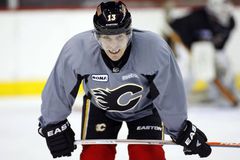