They are the kind of numbers that are sure to make Gary Bettman smile.

Even as several of the NHL's U.S.-based franchises continue to struggle financially, the reality is that commissioner's league is becoming more and more American with every passing season.

At least in terms of who's on the ice.

In a league in which roughly 700 players suit up for a regular shift each year, the number of NHLers from the United States has jumped considerably in the past seven or eight seasons alone.

That dramatic increase means the NHL has gone from drawing less than 15 per cent of its players from the United States to nearly 23 per cent.

General managers and players said this week they've noticed the trend, and they credit the development to two key shifts for hockey in the United States.

1. More regions in the country are producing talent, with players from Alaska, California, Wisconsin and other locales now making an impact in the NHL

"Years ago, we talked about the three Ms in terms of Massachusetts, Minnesota and Michigan as the only places where there was hockey played," said Nashville Predators GM David Poile, whose team has 10 American players this season, second only to the Buffalo Sabres (15).

"We've now drafted a player like Jonathan Blum from California in the first round. There are players in the NHL or Division I colleges from Florida and Texas. I think the exposure of hockey has increased so much more in the last 10 to 15 years."

2. The creation of the U.S. national team development program in 1997 has helped top players improve by getting them to play and train together at a young age

"I think that helps a lot," said Toronto Maple Leafs forward Joey Crabb, one of the first Alaskans in the program back in 1999. "That helps development and in getting players to the NHL. It was a great step for me."

"That's been really a strong point of developing elite players," Poile said. "It's probably not a lot different than what we used to hear about the Russian system where they'd bring all the top players from around the country to play on a national team."

While the number of Canadians in the NHL has decreased only slightly of late – with 52 per cent of players still coming from the country – several European countries have dropped off dramatically.

And all of those spots have essentially been taken by Americans.

The trend has been especially significant on NHL bluelines, as there are now more defencemen from the United States (26 per cent) than all of the European countries combined (25 per cent).

While the U.S. entry stumbled badly to a seventh-place finish at the world juniors this year, USA Hockey executive Jim Johansson said the NHL numbers clearly show their development strategy is paying off over the long haul.

"We're not judging our program on three games," he said. "We like the rise that we've had in our players, but we like more that the rise has been kind of a small and steady rise."

Johansson points to the impressive growth among USA Hockey's youngest players as recent evidence the trend will continue.

Over the past five seasons, the number of children aged 8 and under playing hockey in the United States has risen by more than 15,000, cresting over the 100,000 mark for the first time last season.

"Even as participation is down in so many sports, we're a sport that seems to find a way to grow," Johansson said.

And that kind of growth has shown up in a big way in the NHL.

"This feels like a system that's going to produce players for a lot of years," Poile said. "It doesn't feel like we're in a cycle. It seems like this is going to be normal. I certainly believe that."

There are likely even financial benefits to having more U.S.-born players in the NHL.

Poile, for one, feels that the influx of players from more diverse backgrounds only helps the NHL from a promotional perspective, using the Predators' own homegrown player, Blake Geoffrion, as an example.

"It's a great marketing tool," Poile said. "It's a great tie-in to our youth hockey. Just imagine when Blake is playing and a family comes to a game and a young hockey player sees him.

Komisarek agrees with that perspective, saying he has seen how those type of trailblazers encourage young players to take their game to the next level.

"Once they see someone else make it from their neighbourhood or that program, kids start believing a little bit more," Komisarek said. "They think, 'If he can make it, why can't I?'"

The league itself deserves some credit for that growth in new regions, where beyond simply adding NHL teams, it has also built rinks and encouraged youngsters to play.

As part of the goal to increase hockey's profile in the United States, the NHL works with USA Hockey in order to help boost enrolment, something Johansson said has been to the benefit of both sides.

"That helps the game as a whole. And hopefully with that it's helping the NHL and the game in the U.S." 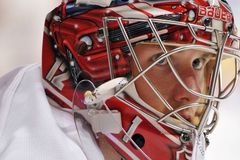