Growing older is an adjustment for everyone. With morning, comes aching joints. Soreness follows a trip to the gym. There is a hint of melancholy and feeling of "Wouldn't it be great if I could do it all over again?"

Now imagine what it is like for a professional athlete getting on in years. Regular folks can muddle along, but it is harder for someone in the spotlight. Few athletes excel past their prime. From one season to the next, their bats seem heavier. Jump shots fall short and carom off the rim.

Imagine a hockey player after 16 years in the NHL. Thundering hits given and absorbed. Thousands of miles skated. Countless slashes and crashes.

Andrew Ference was healthy when he arrived for training camp with the Edmonton Oilers last summer. He set a team record for lung capacity during fitness tests.

Then something happened that hadn't before. Not in Pittsburgh or Calgary or Boston or Edmonton, where he landed two years ago. At first he played only occasionally. Then he was scratched from the lineup night after night.

"It totally has everything to do with getting older," Ference said over coffee at an organic café near his house. The parking lot is icy, but it is comfy inside. High school students on their lunch break crowd around a table and pick at veggie quiches beside a fireplace. "When you are an athlete, age is always the enemy.

"Along with having pure foot speed, I think when you are younger you think quicker on the ice. As much as your body plays a role, your mind does as well. I don't know how you measure it, but there were points early in the season where I felt my reaction time was a little slower than it used to be."

Some athletes such as Ference figure out by smarts and hard work how to extend their careers. Jaromir Jagr is 44 and hardly looks in his twilight. Last month, while his younger Florida Panthers teammates were climbing aboard the bus after a game at Rexall Place, Jagr was beneath the stands dragging a trainer around with what looked like a giant rubber band on his back.

"You talk about your prime, from your mid- to late 20s, and you feel different on the ice," Ference said. "You feel like everything is dialled in.

"But even ridiculous and talented guys like Jagr have to work their asses off all of the time. The physical end and the fitness is not negotiable."

After playing in 901 games over the previous 15 years, Ference played in only six this season. He was placed on the injured list on Nov. 27 after noticing pain in his hip. He didn't get hurt in a game, but during practice.

"The odd thing is, when you don't play, you skate a lot," Ference said. "The volume cranks up because you need to stay fit and be ready."

Somewhere along the line, as he skated and tried to stay fit, his left hip began to ache. A few years ago, he needed surgery to repair a torn abductor muscle, and since then it has bothered him late in the season.

This time, the pain came early. An MRI revealed a torn labrum, and at a surgeon's advice he is waiting for swelling in the cartilage and bone to go down. He will have another test soon, and learn if he needs another operation.

The future of his career is uncertain. He has one more season remaining on a four-year, $13-million contract. He suspects the Oilers will buy it out, and he will most likely retire.

"I will see what happens this summer but, if that is the next page, I am okay with it," he said. "At some point, you run out of time. That is why the NHL is the NHL. No matter how great you are, your career comes to an end."

Relatively small at 5 feet 11 and 182 pounds, Ference was drafted in 1997 by the Penguins 208th overall. There were 38 players chosen after him, only three who had lengthy careers, and none who persevered as long.

On the ice, he has been resilient and tenacious, and occasionally has coloured outside the lines, including giving Montreal fans the finger after scoring against the Canadiens in Game 3 of the playoffs in 2011. "If I played on the ice the way I am off it, I never would have made it," he says. "You have to have a nut side and balance it."

Born in Edmonton, he grew up in the suburbs and was happy to join the Oilers as a free agent in 2013 two years after winning a Stanley Cup with the Bruins.

"For me nothing will ever top what we did in Boston," Ference said. "We went from missing the playoffs to winning in a market where people wanted to be proud of the team. For me, getting to that pinnacle is the high-water mark.

Ference was appointed the Oilers captain before the 2013 season, but agreed this year when management asked him to share the role with Taylor Hall, Jordan Eberle and Ryan Nugent-Hopkins.

"Afterwards my mom called and my wife asked if I was okay and I told them I was totally fine," Ference said. "It's an honour to be captain, but it's not a vanity project and never should be.

"I am who I am. I do stuff in the community and I would do that whether I had a C on my jersey or not. Most people don't understand that to me, it's not that big a deal."

Ference won the NHL's King Clancy Memorial Trophy in 2014 for leadership and contributions to his community. He marched with his wife and two young daughters in Edmonton's Pride parade, counselled gay and transgendered youths, and worked with underprivileged aboriginal students at an inner-city school.

He is currently concluding studies in corporate sustainability and innovation in a graduate program at Harvard's Extension School, and recently became a partner in a venture-capital firm that invests in startup companies that use sustainability technology.

"This has turned into a kind of weird transition year for me, but having these other things in my life makes it easier," Ference said. "I try to tell young players that hockey doesn't have to be the be-all and end-all. There really is so much time they have outside of it, and it's healthy.

"If a brain surgeon can have outside interests and hobbies, hockey players should be able to. There is no excuse not to."

If he is able to play another season, so be it. But if not, Ference will be satisfied.

"When I'm really old, hockey will be a neat thing to talk about, but as far as real impact, I hope it will be the stuff I am doing from now on," he says. "My kids won't look back and be proud of how hard I could shoot the puck. Hopefully it will be because of other things." 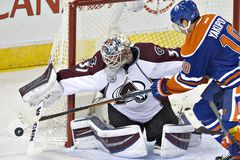 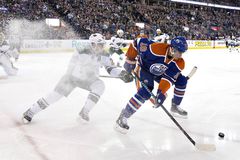 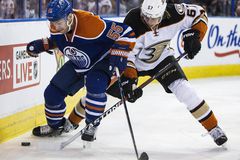