Connor McDavid turns 19 years old today. Little is planned in the way of a celebration. He is in California with the Edmonton Oilers, skating and practising with his teammates, but still not quite ready yet to play in games.

The Oilers quashed rumours about their young star's return last weekend by announcing he is not expected back until after the Jan. 30-31 all-star weekend. It was a disappointment to him, and a blow to the team, which is in last place in the Pacific Division.

"It sucks to be in the spot I am in right now," McDavid said in a quiet dressing room before the Oilers embarked on this week's road trip to Arizona and San Jose. "When we lose, I wish I could do something to help us win. When we win, I feel like I'm not really a part of it. There is a lot of stuff I have missed."

McDavid had just been named the NHL's rookie of the month when he fell awkwardly on Nov. 3 and broke his left collarbone against the Philadelphia Flyers at Rexall Place. He underwent surgery the following day, and has been convalescing somewhat impatiently, like a Labrador retriever puppy waiting to be unleashed, ever since.

He will have missed 37 games by the time the Oilers open the second half of the season against the Columbus Blue Jackets on Feb. 2.

The injury caused McDavid to miss his first game against Sidney Crosby, the superstar to whom he has been likened, and spoiled a much-anticipated December homecoming trip to Toronto. He missed the Oilers' only games in Boston and New York, and sat out a match-up against Buffalo's Jack Eichel, the talented lug chosen right behind him in last June's draft.

On Sunday, he sat idle as his teammates battled against a certain Hall of Famer – Florida's Jaromir Jagr, 43.

Jagr had scored 257 NHL regular-season goals before McDavid was born."It would have been cool to play against a legend like him," McDavid said.

The most talked-about player to enter the game since Crosby 10 years ago, McDavid had five goals and seven assists before he was injured in the second period of his 13th game. He was among the league's scoring leaders and outshining all other rookies on the night his skate hit a rut in the ice and he crashed shoulder-first into the boards.

The Oilers have been guarded about his return date, and decided to use a nine-day stretch without games to allow McDavid's patched-up bone to heal.

"We have the strangest all-star break in the history of the league," Todd McLellan, the Edmonton coach, said of the unusually long layoff. "We have determined he will not be physically ready between now and then, so the decision was pretty simple for us.

"Connor wants to play, and we would want him to play if he could, but Mother Nature dictates a lot with it. Even if he was ready, it would make no sense to bring him back for one game, and then have him take 10 days off. It is better to give him whatever time he needs to heal."

McDavid acknowledged frustration with his extended recovery while having lunch with his agent, Jeff Jackson, during the Christmas holidays. Until last weekend, the Oilers refused to speculate about his return, other than to say it could take months.

"It is hard for anyone to sit around, especially a first-year player who is eager to prove himself," said Jackson, who played for the Maple Leafs and also served as their assistant general manager and director of hockey operations under John Ferguson Jr. "It's a really messed-up place to be [mentally].

"He looks great, but there is a big difference between practising, taking shots and lifting weights, and getting crunched against the boards by a 225-pound defenceman and having guys fall on you in the corner. Everybody is anxious for him to come back because he is one of those types of players.

"But there is not a scenario in the world where the Oilers would rush him."

McDavid started skating again with his teammates on Jan. 1, and has begun putting pressure on his collarbone while driving his stick down into the ice while practising face-offs.

He isn't concerned about reinjuring himself, and says it won't affect his approach to the game. Before he got hurt, he was turning heads around the league by driving the puck up the ice and barrelling toward the net at blazing speed. He was breaking in alone on Philadelphia's goalie Michal Neuvirth when one his skates – and his season – took an unexpected and unfortunate turn.

If McDavid returns on Feb. 2, he will accompany the Oilers on their only visit to Montreal on Feb. 6 and will be available for a rematch with Eichel in Buffalo on March 1. Edmonton is 12-18 in his absence, but still in the hunt for its first playoff berth in 10 years.

"It is never fun, and you never feel good when you have a setback," McDavid said. "Playing in the NHL has been my life's goal, so this has really been hard for me."

A year ago playing for the junior Erie Otters, McDavid sat out five weeks after breaking a bone in his pinkie finger during an on-ice fight.

"But this sucks at an entirely different level," he said.

So on his 19th birthday, he is in San Jose, where he will watch his teammates play Thursday night against the Sharks. Perhaps someone will bring him a cake, but he doesn't feel much like celebrating right now. 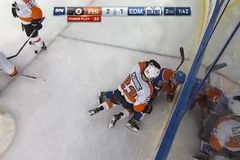 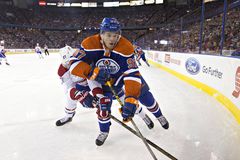