The following statements were issued Thursday by NHL owners Jeff Vinik of the Tampa Bay Lightning , Ron Burkle of the Pittsburgh Penguins , Mark Chipman of the Winnipeg Jets and Larry Tanenbaum of the Toronto Maple Leafs :

The players came with a strong desire to get back to playing hockey. They were professional and did a good job of expressing their concerns and listening to ours. We Wanted to move quickly and decisively. We have all spent too much time Without any real progress at the expense of our fans, our sponsors and the communities we serve. It was time to make bold moves and get a deal. Many people think We got over our skis and they are probably right, but We wanted to do everything we could to get back to hockey now. We didn't hold We made substantial movement on our end quickly, but unfortunately that was not met with the same level of movement from the other side. The players asked us to be patient and keep working with them. |t's not what they do and they Wanted us to know they were committed.

We understood and appreciate their situation. We came back with an aggressive commitment to pensions which we felt was well received. We needed a response on key items that were important to us, but We were optimistic that we were down to very few issues. I believe a deal was within reach.

We were therefore surprised when the Fehrs made a unilateral and "non-negotiable" decision – which is their right, to end the player/owner process that has moved us farther in two days than we have moved at any time in the past months.

I want to thank the players involved for their hard Work as We tried to reach a deal.

I hope that going backwards does not prevent a deal.

"I'd like to thank the NHL for giving me the opportunity to participate in this very important process.

I came here optimistic that we could find a solution. That sense of optimism grew after our first few sessions, including the small group discussions late last night.

Regrettably, we have been unable to close the divide on some critical issues that we feel are essential to the immediate and long-term health of our game.

While I sense there are some members of the players association that understand our perspective on these issues, clearly there are many that dont.

I am deeply disappointed that we were unable to bring this extremely unfortunate situation to a successful conclusion and I wish to apologize to our fans and sponsors for letting them down."

Larry Tanenbaum, Chairman of the Board, Maple Leaf Sports and Entertainment

"I was pleased to be asked to join the Player/Owner negotiation sessions. I had hoped that my perspective both as a businessman and as one of the owners of the Toronto Maple Leafs would be helpful to the process. Like all other teams, this work stoppage has hurt our fans, our employees and our business. Neither the owners nor the players will ever recover the losses incurred with this work stoppage.

I understand how important it is to have a strong league and 30 healthy teams. I must admit that I was shocked at how things have played out over the last 48 hours. The sessions on Tuesday felt cooperative with an air of goodwill. I was optimistic and conveyed my optimism to the Board of Governors at our Wednesday meeting. However, when we reconvened with the players on Wednesday afternoon, it was like someone had thrown a switch. The atmosphere had completely changed. Nevertheless, the owners tried to push forward and made a number of concessions and proposals, which were not well-received. I question whether the union is interested in making an agreement.

I am very disappointed and disillusioned. Had I not experienced this process myself, I might not have believed it. Like all hockey fans, I am hopeful this situation can be resolved as soon as possible. I miss our game."

"After working this week with our players toward what we hoped would be a new agreement, owners presented a proposal we believed would benefit those great players, ownership, and, ultimately, our fans for many years to come. While trust was built and progress was made along the way, unfortunately, our proposal was rejected by the Union's leadership. My love for the game is only superseded by my commitment to our fans and I hold out hope we can soon join with our players and return the game back to its rightful place on the ice." 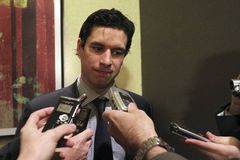