Pierre-Alexandre Parenteau was in the right place at the right time — again.

Parenteau scored the only goal in the shootout to lift the Montreal Canadiens over the Florida Panthers 2-1 on Tuesday night.

Parenteau is 4-of-6 in shootouts this season, and all four goals have been game-winners.

"He's got that magic touch in the shootout," Canadiens coach Michel Therrein said. "That was a huge point."

Parenteau's shot glanced off the glove of Roberto Luongo and went into the net in the third round of the tiebreaker.

"I think that's my fourth (winner), but who's counting?" said Parenteau, laughing. "I've always done good in the shootout. This year things are going pretty well for me when it's time to close it. I'll take it."

Jonathan Huberdeau missed on the ensuing attempt, and Montreal improved to 5-1 in shootouts.

The Canadiens have won four in a row — including three on the road — and seven of eight. Montreal owns a three-game winning streak against the Panthers.

Brendan Gallagher scored in regulation for Montreal, and Dustin Tokarski made 36 saves in his first start in 11 games. The Canadiens improved to 14-0 in games in which they have scored first.

"It was just fun to get another win," Tokarski said.

Nick Bjugstad scored Florida's goal. Luongo stopped 33 shots for the Panthers, who lost at home for the first time in four games. The crowd of 19,614 was Florida's largest on home ice.

"It's good to get that point, but a little disappointing," Bjugstad said.

The Panthers had the best chance to win in overtime but Jimmy Hayes fired wide of an open net in the final seconds. The Panthers have points in their last eight games, including five decided in shootouts.

"We got a big point, but when you get that close, you want that second one," coach Gerard Gallant said.

Trailing 1-0, the Panthers tied it on Bjugstad's goal with 1:49 left in the third period. Aaron Ekblad passed the puck to Bjugstad from the right side, and his wrist shot from the slot beat Tokarski on the glove side. Bjugstad leads the Panthers with 13 goals.

The Canadiens broke the scoreless tie when Gallagher put a puck past Luongo with 1:06 left in the second period on their 28th shot.

Gallagher took control of the puck at the blue line, skated to the right circle and got off a wobbly shot that went between Luongo's pads and trickled into the net.

"I shot it through a screen, so I?knew it would be a little tougher to pick up," Gallagher said. "He had made some pretty big saves earlier, so it was nice to see one squeak through."

It was a shot that Luongo felt he should have stopped.

"I wasn't happy with myself on that goal," Luongo said. "He made a good play."

Early in the second, the Panthers had a goal waved off when it was ruled that Sean Bergenheim jammed the puck in and pushed Tokarski into the net.

NOTES: Canadiens D Andrei Markov was hit in the face with the puck in the second period on an errant attempt to clear the puck by P.K. Subban. Markov left but returned later in the period. ... Luongo, a Montreal native, is 1-7 against the Canadiens in his last eight games against them. ... Panthers owner Vincent Viola, speaking on the team's broadcast after the first period, said he is pleased with where the team is at this point. "I think we're off to a great start," Viola said. "I think, so far, the team has shown that when things are down, they have a calm around them. They respond very well.". Josiane Huberdeau, the 14-year-old sister of Panthers forward Jonathan Huberdeau, sang the Canadian national anthem before the game. 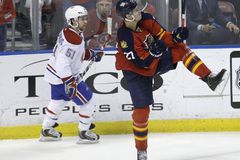 Sekac, Eller score in Canadiens’ win over Hurricanes
May 12, 2018 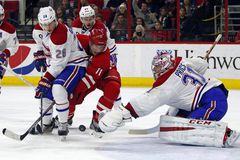 Price solid again as Habs cool off surging Islanders
May 12, 2018 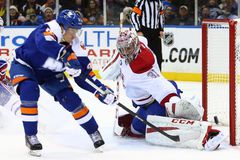 Canadiens end home stand with win over Senators
May 12, 2018 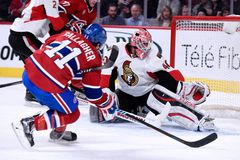 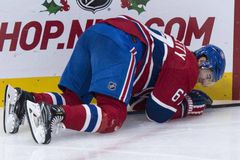 Pacioretty leaves game injured as Canadiens fall to Ducks
May 12, 2018 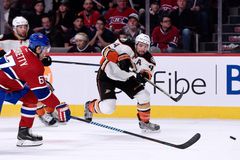