Part of being an effective NHL general manager is understanding insurance. You need collision, of course, because there are always collisions in a hockey game, and some result in injury. But really, the most important policy is comprehensive and that's what the Pittsburgh Penguins' Jim Rutherford took out this year, in an attempt to enhance his team's chances of defending the Stanley Cup. First, he went out and brought in extra defencemen – Ron Hainsey and Mark Streit – because he knew that eventually, he would need more than a starting six. Kris Letang's season-ending surgery proved him correct.

But mostly, it was the deal that Rutherford didn't make that had his NHL brethren puzzled, until it proved wholly prescient. Most everyone thought Rutherford would, well in advance of the 2017 NHL expansion draft, move goaltender Marc-André Fleury because the expansion rules permit teams to protect only one goalie, and in Pittsburgh, that one is going to be Matt Murray, their goalie of the present and future.

Murray helped them win the Stanley Cup last season and was the Penguins starter for 21 playoff games. But Murray also has had a bit of an injury history, too. He wasn't able to start the playoff opener last year – that fell to Jeff Zatkoff, their No. 3 because Fleury was also out – and this year, when it appeared all systems were go for the start of their series against the Columbus Blue Jackets, Murray got injured in warmup of the opening game.

Thankfully for the Pens, they made the decision to keep Fleury around for insurance purposes, a policy decision that paid big dividends, when he stepped in to provide difference-making goaltending in what finished as a 4-1 series victory.

Columbus was supposed to have the goaltending edge in the series because of Sergei Bobrovsky, a sure-fire Vézina Trophy finalist, who'd had an exceptional year. But Pittsburgh's high-powered offence lit up Bobrovsky. In the meantime, Fleury was exceptional at the other end. In Thursday's deciding game, Fleury made 49 saves as the Penguins became the first Eastern Conference team to advance to the second round. Fleury set a Penguins' record with the victory, his 57th in the playoffs, moving him past Tom Barrasso (56) for most in team history.

Apart from Fleury's clutch goaltending, ultimately what turned the series in Pittsburgh's direction was the play of its stars down the middle. Columbus posted the fourth-best record in the NHL regular season because of its one-to-12 depth up front. But the Blue Jackets had no answer for Sidney Crosby and they especially had no answer for Evgeni Malkin, who missed the final 15 games of the regular season recovering from an undisclosed injury.

Malkin likely could have played a few games in the final week, but the Penguins figured, why risk it? He'd been in contention for the NHL scoring title and in the midst of an MVP-style season before his injury. But his playoff pedigree is bullet-proof. He was the Conn Smythe winner in the 2009 Penguins' Stanley Cup season and finished the series against Columbus with an eye-popping 11 points in five games (two goals, nine assists). The only other Penguins player to accomplish something comparable was Mario Lemieux, with 12 points in the 1991 Stanley Cup final against the Minnesota North Stars. When Hockey Night in Canada does its nightly playoff montage, one of Lemieux's goals in that series is usually featured. Malkin did most of his damage while Canada was focused on its trio of Eastern Conference playoff teams, but his play was no less memorable, even if it happened over on Sportsnet 360.

So the Penguins answered one of the early questions about their title defence, defeating a pretty good Columbus team, and now await the winner of the Washington Capitals-Toronto Maple Leafs' series. Insurance, sometimes you have to have it. And it turned out the Penguins were in good hands with Fleury. 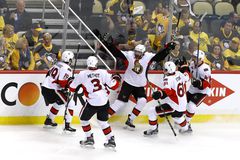 Crosby, Wilson help Penguins eliminate Blue Jackets with Game 5 win
April 20, 2017
Follow Eric Duhatschek on Twitter @eduhatschek
Report an error Editorial code of conduct
Due to technical reasons, we have temporarily removed commenting from our articles. We hope to have this fixed soon. Thank you for your patience. If you are looking to give feedback on our new site, please send it along to feedback@globeandmail.com. If you want to write a letter to the editor, please forward to letters@globeandmail.com.
Comments