There was plenty of cheering from fans at MTS Centre on Sunday night, but most of it was aimed at the visiting team in Winnipeg's 3-2 loss to the Anaheim Ducks.

With Anaheim forward Teemu Selanne in the building, Jets fans voiced their appreciation for the man who began his NHL career with Winnipeg in 1992-93 by setting rookie records of 76 goals and 132 points.

The crowd gave a roaring cheer during the singing of the American national anthem when the videotron showed the 43-year-old Finnish Flash. And Selanne received a standing ovation midway through the first period when the announcer at MTS Centre noted his storied career, which Selanne has said will end after this season.

He stood up from the bench and acknowledged the cheering with a wave of his glove.

"Some ways, you felt that I was on the home team," Selanne said with a laugh.

After playing 231 games in a Jets' uniform, Selanne was traded to Anaheim in February 1996 and didn't get to move with the Jets when they relocated to Phoenix and became the Coyotes at the end of that season.

"I feel like even when I left, they have always been there after, too, so it's a good feeling," he said.

Selanne's teammate Corey Perry was the on-ice hero for Anaheim when he capitalized on a Winnipeg mistake to score the winning goal.

Jets defencemen Zach Bogosian had raced down the ice to grab a loose puck behind the net, but when he turned to clear it up the ice, he fanned on the shot and the puck went to Perry in front of the net.

The Ducks winger quickly put a high shot above goalie Ondrej Pavelec at 14:29 to the groan of fans at MTS Centre.

"If I didn't score that one, there'd be something going on," Perry said. "I wouldn't tell you what would happen, but it wouldn't have been pretty.

"It was a gift and those are the ones you have to capitalize on, especially right in front of the net with nobody around you."

Andrew Ladd had a pair of goals for Winnipeg and Blake Wheeler assisted on both of them in his 375th NHL game.

"We didn't deserve to win, regardless of that," Ladd said. "Really the only reason we were in the game still was (Pavelec).

"Tough break. (Bogosian) slips and the puck ends up in the wrong area and in the net. It's not his fault at all. It's on everybody else in the room."

Anaheim doesn't play in Winnipeg again this season unless the teams face each other in the playoffs.

Jets coach Claude Noel was upset with his team's play, except for Pavelec's performance.

"If you look at the way we played, we didn't deserve to win the game playing that way," Noel said. "We got saved by our goalie. And realistically, our goalie has saved us in all three games (this season). He's been superb. Not average, superb."

He added Bogosian's error was a mistake that "sometimes happens."

Even though the Jets were outshot 15-6 in the first period, they held a 2-1 lead on Ladd's goals.

First he deflected Wheeler's wrist shot just 11 seconds into a power play to make it 1-0 at 9:06, but then Ducks centre Perreault tied it up a minute and 10 seconds later when he flipped in a loose puck despite Pavelec's best efforts to stop it.

Ladd got the go-ahead marker at 16:17, catching Fasth out of position. After the puck bounced off the backboards, Fasth slid to the other side of his crease, but Ladd had quickly shot the puck into the open side.

The Jets didn't get a shot on net until almost five minutes into the second period and couldn't capitalize on two power-play opportunities.

Anaheim tied it up with four seconds left in the middle period when Cogliano redirected a Dave Winnik shot.

The Jets didn't get their first shot on goal in the third period until almost seven minutes in, with Pavelec facing four shots in the same span.

Notes: Winnipeg defenceman Tobias Enstrom has four assists in his first three games a Bogosian was playing in his 300th NHL game. He was drafted by Atlanta in the first round, third overall, in the 2008 entry draft ... The Ducks will mark the 20th anniversary of their inaugural NHL game on Oct. 8. They will celebrate at their home-opener on Oct. 10.

Jets towering defenceman is all Buff, no fluff
October 6, 2013 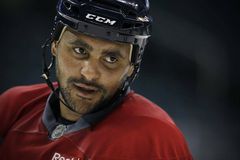 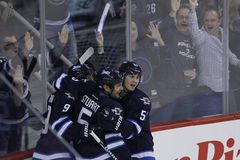 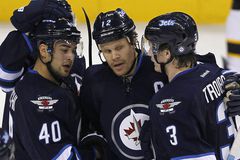 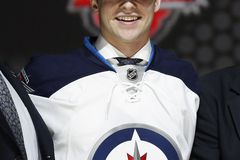 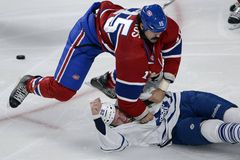 Jets staying down to earth after season-opening win in Edmonton
October 2, 2013 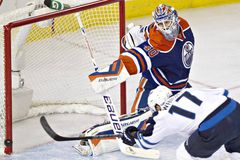 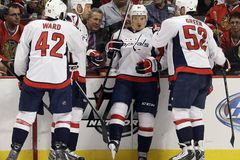