Dion Phaneuf is emerging as a game-changer at the IIHF World Hockey Championship.

No player has been sent over the boards more by Canadian coach Ken Hitchcock and few, if any, have made a bigger impact through three games here.

Hitchcock believes the 26-year-old Maple Leafs captain is more positionally sound on the ice than he once was.

"He's really composed," said Hitchcock. "He's receiving the rush now, that's the best way I can describe it. When he first came in the league, it was attack the rush, step up - and he created his gaps by that. ... (Now) he's in position to receive the rush, he's in position when the puck turns over to be an outlet.

"His game is mature and it's refined now and he's getting better."

Phaneuf was a force in Canada's 4-3 overtime victory over Switzerland on Tuesday. His icy glare was on full display during 25 minutes of ice time and a stunning open ice hit on forward Simon Moser midway through the game offered another reminder of his ability to intimidate opponents.

Canada was trailing 1-0 at the time of the bodycheck - which briefly left the Swiss player unconscious - and went on to grab the lead before the end of the second period.

"He has the ability to catch guys across the middle," Canadian GM Dave Nonis said of Phaneuf. "He's very mobile for a big guy. That was a big part of the game, that hit. I thought the Swiss were playing very well - they played well throughout the game - but for about a 10-minute stretch after that we were able to take control of the game.

"A large part of that was because of Dion's hit."

Phaneuf has known nothing but winning at this tournament. His only other world championship experience came four years ago in Moscow when Canada went on an unbeaten run to capture gold.

The team is 3-0 so far here and was given a complete day off Wednesday while family and friends began arriving in Slovakia, including Phaenuf's parents and his girlfriend, actress Elisha Cuthbert. They will return to practice Thursday before playing Friday against either Sweden or the U.S.

While Phaneuf doesn't believe he's changed much as a person over the last few years, he does acknowledge the January 2010 trade that sent him from Calgary to Toronto made an impact on his game.

"I've definitely had more responsibility put on me in Toronto," said Phaneuf. "It's welcomed. I enjoy being the captain of the Maple Leafs, I'm honoured to be the captain there. ... I've definitely learned lots over the last few years and this is another thing that I come here and want to take as much out of it and learn as much as I can from it."

The Maple Leafs organization encourages all of its players to represent their country when given the chance. Nonis is Toronto's director of hockey operations and brought along Phaneuf, fellow defenceman Luke Schenn and goalie James Reimer to play for Canada.

Nonis gave Phaneuf some time to mull over his invitation to the tournament and was thrilled when he accepted it.

"It helps you prepare for the Stanley Cup playoff run," said Nonis. "We're hopeful that that's going to be something he's going to be able to do for a number of years. ... I think it (also) helps him as a leader, he's the captain of our team and this is another step for him, another chance for him to show his leadership abilities and bring some young people along and show what he can do as a premier leader.

There is seldom much quiet to be found when Phaneuf is around. On the ice or in the dressing room, he tends to make himself heard.

"If you're not doing something right, he'll let you know," said Reimer. "And he'll let the other team know he's going to do what he can to stop them - whether trying to intimidate them with words or smoking them with open ice hits.

"He's intense and he loves to win."

Phaneuf is skating on the top defence pairing with Minnesota's Brent Burns at this world championship and will have plenty of opportunity to contribute to the team's success. He received a team-best 21:28 of ice time over the first three games.

Now that the tournament has started, his trademark intensity has returned.

"I think the biggest thing is when you come over, you have to be all in," said Phaneuf. "You're here to win another championship. We were talking the other night with the guys about how much we haven't even really been paying attention to the (NHL) playoffs back there - not only because of the time change but because we're playing here to try and win something.

"This is like our playoffs and it's a real big tournament. We're here to win a championship." 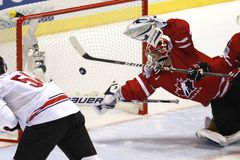