"The Brand" was at Air Canada Centre on Tuesday, and he amassed quite an audience for the latest showcase.

With the Hockey Hall of Fame ceremonies taking place in Toronto the day before, there were more national-media members in town than is typical for a weeknight meeting between the Maple Leafs and Nashville Predators.

There was a marquee draw at the morning skate, too: P.K. Subban, a local, was making his Toronto debut with the Predators, four-and-a-half months after his trade from Montreal rocked the hockey world. Dozens of cameras and many multiples more reporters showed up to document the event.

Subban was happy to oblige, first by telling the throng about his difficult transition from Hab to Pred, then by shedding light on his new documentary, Skate Past the Noise, which debuts on HBO Canada on Friday night.

"I'm just really happy [it's finished] now because I've had to watch it like 70 times, being a producer on it and having to give feedback and all that stuff," Subban said of his nascent film-exec career. "But, you know what, it was exciting to do it over the off-season and I think it's really educational.

At this point, it's hard to imagine what people don't yet know about P.K.

His larger-than-life persona was paired with a remarkable rise with the Montreal Canadiens, going from a second-round pick (2007) to a Norris Trophy winner (2013) in one of hockey's toughest markets.

It wasn't always a smooth ride.

While Subban piled up points (among defenders, only Ottawa's Erik Karlsson has more since 2012) and became one of the best possession blueliners in the league, he didn't always mesh with Canadiens coach Michel Therrien – in personality or style on the ice.

When times were good – as in during the Canadiens' playoff run to the Eastern Conference final in 2014 – Subban's over-the-top enthusiasm and flourishing off-ice endorsements were fine.

But when things went sideways for the team, as they did in a big way during Montreal's 19-34-3 slide to finish last year, he wasn't always a good fit in a staid NHL dressing room.

Some of that was the fact his teammates wanted to mope. He didn't.

That's not a P.K. problem; it's a clubhouse-culture one. But it became a P.K. problem in the mind of general manager Marc Bergevin nonetheless, and the Canadiens decided swapping Subban for Predators captain Shea Weber in June was the solution.

Subban admitted on Tuesday that adapting to his new environment has been "a challenge," one he has tried to embrace.

"I really believe that a lot of the outcome of whatever the situation is is determined by your attitude and how you approach it," he said. "For me, I always approach everything with a positive attitude. I seem to get more success doing that than anything else.

"Going through the process of the trade was definitely different because I knew that I had to leave a lot of plans behind in Montreal that I made while playing there. That was tough. Some of it still is tough. You miss your friends and what you're used to seeing. But that's all part of growing up."

The Predators' slow start has put even more pressure on Subban and his teammates early this season. While the Canadiens entered Tuesday's games with a 13-2-1 record, and Weber is one of the top-scoring defencemen in the league with 13 points in 16 games, Nashville and Subban have been uneven.

The Predators won only three of their first 11 games before reeling off three straight wins at home against Ottawa, St. Louis and Anaheim last week. More troublingly, the Preds have had trouble controlling play – a Subban hallmark – and still sit below average in puck-possession.

But Nashville has started to turn things around now that Subban is playing with Mattias Ekholm instead of Roman Josi. Even his new partner acknowledged the adjustment is ongoing.

"He's bringing a lot of energy to the room," Ekholm said of his first impressions. "We're just trying to find our stride together as a pair. It's getting better every game. It's a matter of getting used to where he's at [on the ice] … That's what takes a few games to get into. That's something we're working on."

"There's obviously a transition, off the ice and on the ice," Subban added.

Subban is an interesting fit for the Predators. For the longest time, Weber was the face of the franchise, and his quiet persona is an obvious contrast to his replacement's. Nashville has had few colourful stars in the team's nearly 20 years in the league – no one who would, say, go to a Tennessee Titans game and strip off their shirt at centre field to get a rise out of the crowd.

Subban? He has been there mere months and already lists that as the highlight of his time so far in his new city.

It remains to be seen how the marriage functions long term. They're in the newlywed stage, and at times they've looked disjointed.

As for comparisons, it's apparent that some of Weber's production in Montreal is unsustainable. So are some of the Predators' struggles, provided they get capable goaltending. Both players and their teams are likely to succeed in the near term. And Subban has the advantage of being four years younger than Weber, which should tilt things in his favour down the line.

Far from running away from that comparison, Subban seemed to embrace it on Tuesday. He admitted he has his Jan. 3 return to Montreal marked on his calendar already.

He's ready to be the centre of attention all over again.

"I miss a lot of those guys I played with for a long time," Subban said. "I want to see them all do well – and can't wait to play against them." 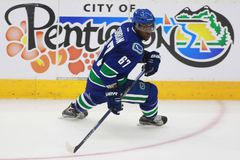