They lined up as many as five hours before puck drop, standing in the blistering 34-degree heat – and then torrential rain – for a chance to sit in Amalie Arena with 20,000 others and madly cheer on the Tampa Bay Lightning.

Some had never been to a live game. Others were regulars clad in Stamkos, Hedman and Callahan jerseys from the nearby team store.

The unusual part of it all was that Game 6 of the Stanley Cup final wasn't even there. It was thousands of kilometres away in Chicago. This was Florida, in June, the supposed Sun Belt antithesis of hockey country.

This Lightning team captured the hearts and minds of many in the Tampa area this season, first with a stellar 108-point regular season, and then with a 26-game playoff slog to the final, which ended with a 2-0 loss to the Blackhawks on Monday.

Since bottoming out and wasting the goodwill generated by their last big run – an unexpected Cup championship in 2004 – the Lightning have installed a committed owner and strong management and are much more likely to capitalize on their current success.

The fans should be back again next year, and one of the youngest and most dynamic rosters in the NHL certainly will be, too.

"I'm competitive," Lightning owner Jeff Vinik told The Globe and Mail, adding that he intends to continue to spend close to the NHL's salary cap. "We want to be at the highest level we can, year after year, and have long-term, sustainable success. Hopefully we win a Cup or two along the way."

It's a reasonable goal, even in the near term.

Much of the post-Cup-final focus has been on the Blackhawks' looming salary-cap crunch. With the NHL's limit expected to rise only minimally (into the $71-million [U.S.] range) and stars Jonathan Toews and Patrick Kane getting big pay increases, Chicago general manager Stan Bowman needs to have another strong off-season to keep the champions in contention.

The Lightning, meanwhile, have no significant free agents to re-sign. They have one of the deepest prospect pools in the NHL. And they have between $5-million and $7-million in cap space. GM Steve Yzerman could also trade away a player with an overpriced contract, such as defenceman Matt Carle, and become one of the major players in free agency or on the trade market.

This is a team in a perfect situation: It is young, highly skilled and cheap, at least for one more season. The Lightning will enter 2015-16 as strong favourites in the Eastern Conference, especially as the league shifts even more toward speed and skill. And especially after how close Tampa Bay came this year, despite a lineup filled with young players experiencing postseason pressure for the first time.

The Blackhawks are worthy champions this season, but the Lightning proved worthy challengers. Even after major injuries to top players – Tyler Johnson played with a broken wrist and Ben Bishop with a groin tear, among others – Tampa kept the final as close as it's been in NHL history, with the entire series separated by no more than a goal except for the final five minutes of Game 6.

Even Chicago's veterans, who have been through more of these battles than anyone, marvelled at how well the Lightning kept up, noting that they gave the Blackhawks their toughest test.

"It was incredible, honestly," Kane said.

In many ways, this Lightning resemble the Blackhawks back in 2009, when they rose out of some trying seasons to challenge the Detroit Red Wings – a team that had won four of the previous 11 Cups – in the Western Conference final.

Chicago lost that series, but Toews, Kane and the other young Blackhawks gained essential experience. They saw how it felt to lose, after scraping for months to get as far as they did. And they saw what it would take to win.

Then, a year later, they did.

Monday was a difficult day for the Lightning organization. Coach Jon Cooper said after the loss his team was "crushed," and captain Steven Stamkos was the very picture of devastation as he quietly croaked out postgame interviews, still teary and red-eyed.

To come within two wins of a championship, against a franchise almost everyone, including commissioner Gary Bettman, has branded a dynasty, hurt. But it also gave Tampa Bay a taste of what it's up against, and significant motivation to get back there again.

With a solid owner, a great GM and great players, it was no fluke the Lightning were there. They aren't one-hit wonders like the Flyers in 2010 or Devils in 2012 – not if they continue to build the way they have been. These Lightning should be back again.

"Steve had a plan five years ago to build a nucleus of good young talent, to draft well, to be patient," Vinik said of Yzerman, who he hired away from the Wings in 2010 and now credits with much of Tampa's success. "He has stuck to the script. He has done a great job.

"Nothing is guaranteed in this business, but we like the way we're positioned – for the long term." 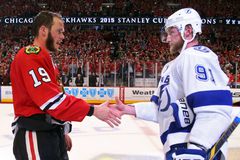 Blackhawks’ Quenneville is quietly having a Hall of Fame coaching career
June 16, 2015 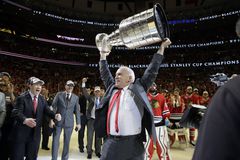 Duhatschek: For the Blackhawks, change is key to consistency
June 16, 2015 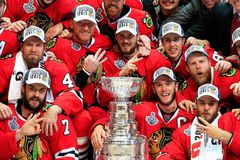