A cottage industry has sprung up around the dwindling contingent of francophone players on the Montreal Canadiens, but that doesn't mean English is the only language spoken in the dressing room.

Shortly after pitching up to training camp, Alexander Radulov, newly arrived from the Kontinental Hockey League, suggested that it might be time for a new rule: no Russian in the room.

Ordinarily, that would be a solution in search of a problem, but this year's camp opened with seven Russian speakers on the Habs' list of invitees – 11.5 per cent of the roster (two of them, Alexei Emelin and Andrei Markov, were at the World Cup of Hockey and showed up a few days later).

When 2016 first-round pick Mikhail Sergachev was tabbed to begin the regular season in Montreal, the Canadiens boasted five native Russian speakers on the roster, more than the decidedly Russophile Washington Capitals.

"It's unbelievable, sometimes we're trying to shut ourselves up a bit. People are yelling in Russian all over the place and guys don't understand what the hell is going on," said centre Alex Galchenyuk, an American with Belarussian roots who spent several of his formative years in Russia. "It's been kind of hilarious."

After a recent training camp practice, former first-round draft choice Nikita Scherbak, a second-year pro from Moscow who will begin the season in the AHL, sidled up to Galchenyuk's locker and bantered quietly in Russian with him.

"It's good when you hear your own language around, especially for a young guy having guys like Radulov and Galchenyuk, it's nice to be able to ask questions," said Scherbak, who played junior hockey in the Western Hockey League. "I think a lot more people have started checking out the Montreal Canadiens in Russia."

Call it part of the Habs global outreach.

Radulov, who has taken the Habs' fan base by storm in the first two weeks of the regular season, said it's helpful for his younger countrymen to have someone to talk to in their native tongue, but that the adaptation to North America necessarily involves immersion into English language and culture.

"I've been that guy, I know how it works," said Radulov, who first came to Canada as a junior-aged player for Patrick Roy's Quebec Remparts, and whose first NHL stint in Nashville ended unhappily after he bolted to the KHL, then returned a couple of seasons later only to miss curfew during the playoffs.

At 30, Radulov is a relative greybeard, but he doesn't have quite the same social status as 37-year-old Andrei Markov, a sort of paterfamilias for Russian hockey players in North America (for years, Alex Ovechkin made a point of dining with Markov whenever the Washington Capitals came to town).

Like Montreal's faintly old-world feel, it's not an inconsiderable attraction.

The poised, strapping Sergachev, who spoke effectively no English when he moved to Windsor last year to play for the OHL Spitfires – he is from Nizhnekamsk, a dot on the map 1,000 kilometres east of Moscow, and mostly relied on his smartphone translator app – is plainly in awe of sharing the same space as Markov.

Galchenyuk concurred: "He's the General, and he's not called that for nothing."

There was a time when it wouldn't have been unusual for a typical NHL dressing room conversation to be liberally peppered with Russian accents.

Last season, the number of Russian players who played at least 20 games in the NHL: 27.

Several of those have since departed for the KHL, notably Pavel Datsyuk of the Detroit Red Wings, whose exit at the age of 37 was somewhat predictable, and Dallas Stars winger Valeri Nichushkin, whose leave-taking at 21 was less so.

The trend line has pointed downward for a half-decade: Last year, 14 teams didn't employ a single Russian player – owing partly to the development of the KHL; it may be a ramshackle operation, but it is home and the earnings are mostly tax-free.

Hockey being hockey, there are stubborn preconceptions regarding Russian players.

Some are the natural consequence of KHL leverage when it comes to contract negotiations, some have to do with it being a hassle to perform due diligence on prospects' families, there might even be a hint of ethnic stereotyping.

Many executives are mindful of being burned in the past by the Alexei Yashins and Nikita Filatovs of the world.

Ilya Kovalchuk's surprise decision to decamp to the KHL in 2013, just three years into his 15-year, $100-million (U.S.) free agent deal with the New Jersey Devils, has left lasting scars; apropos of nothing, Kovalchuk threatened his KHL team with a return to the NHL this summer.

North Americans flame out all the time, too, but cases involving the likes of Radulov tend to stick in the imagination (although the Habs were far from the only team willing to give the offensive winger a third NHL chance).

Whatever the reason, five NHL clubs have zero players or prospects on their books from a country that has won six straight World Junior Championship medals and whose exports are coming to North American junior hockey in a steady stream.

Players like Galchenyuk don't see a grand conspiracy – "I'm pretty sure most teams want good players, wherever they're from. Russians usually have a lot of skill, and who doesn't want skill?" – but conversations with agents, scouts and front-office people suggest that there might be a too-much-trouble bias at play.

"It's fair to say there is a reticence on the part of some teams, especially if you can find an equivalent player closer to home in North America," said a veteran player agent who has had several Russian clients and requested anonymity in exchange for frankness.

Others around the league see nothing sinister in the fact that Russian participation in the NHL is ebbing, suggesting it's a function of the pressure teams face in the cap era on getting their personnel decisions right.

It leads to conservatism; in the same way some teams clearly avoid Russians, others avoid players under six feet, or picking goalies in the first round.

Still, some NHL teams have garnered a reputation as being especially hospitable to Russians – Washington, Tampa Bay and Detroit to name two – the common thread being they tend to be successful clubs that hunt for draft-day bargains.

When Wings alumnus Steve Yzerman took over as general manager of the Tampa Bay Lightning, he picked Russian players with his first three choices at the following draft (and hit the jackpot with Nikita Kucherov).

And there is value to be had with Russian prospects, who often slide down the draft board not because of talent but because of the KHL threat, and fear of the unknown.

Notable recent examples involve Nichushkin, Evgeny Kuznetsov and Vladimir Tarasenko, each of whom were lottery picks on talent but were drafted 10th or beyond in the first round.

It may be that players like Ivan Provorov, a 2015 Philadelphia Flyers draft, Scherbak, one of only nine Russians drafted in 2014, and Sergachev will eventually be added to the list of the underrated.

The story with KHL free agents is a similar one.

Teams are typically willing to splash the cash only on proven talents like Radulov, or take a chance on skill merchants like KHL All-Star Artemi Panarin of the Chicago Blackhawks, who, if rumours are to be believed, was also courted by the Habs; Montreal executives are also believed to have inquired about KHL forward Vadim Shipachyov, who can opt out of his contract in 2017.

Montreal has long been on the list of Russian-friendly teams – after all, Alex Kovalev was and remains a minor folk hero – and are likely to remain there, with a caveat or two.

Like a lot of NHL teams, the Habs have lately tended to draft Americanized Russians – that's to say prospects who have played some level of junior hockey in North America. Players such as the extroverted Scherbak and Sergachev, who managed to learn English in three months (partly, he says, because of the translation app on his smartphone).

It has become a popular path among Russian and other Eastern European players who can afford to take it, which has also had an impact on development programs in their home countries.

"Younger players want to get to the NHL as fast as they can. I'm not saying it's different or worse to develop in Russia, but sometimes it's just harder for a young player to make it into the KHL and just play five or 10 minutes. The CHL is the best league in the world, it gets you prepared for a smaller rink," Galchenyuk said. "They adapt more, they speak English, so when they get drafted and come to camp, it's less awkward."

In the case of free agents, the Habs have sought players with NHL pedigrees – like Radulov and Alex Semin, the subject of an ill-fated experiment last season.

Semin lasted only 15 games in Montreal and it's still possible that Radulov, who is on a one-year contract, won't succeed in earning himself a long-term deal with the Habs.

The early evidence points in a different direction; Radulov has five points in his first six games, and adoring Bell Centre cheers of "Ra-du, Ra-du" have replaced the cries of "P.K." from years past.

Markov could become a free agent next spring, and the last two years of Emelin's pact, which checks in at a $4.1-million annual cap hit, are starting to look expensive.

So perhaps the Habs' Russian contingent will be substantially smaller a year from now. Should it come to pass, it will simply be another data point on the broader trend.

Plus, it's not like there aren't other Russian speakers in the pipeline. 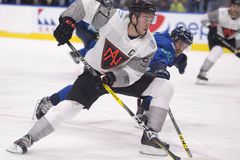 Kelly: Russia returns to being the bad guys we remember
June 15, 2016 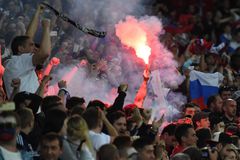