It wasn't immediately clear which was the more surprising development during Tuesday's opening game of the World Cup of Hockey final: The hundreds of empty seats in the lower bowl at the Air Canada Centre, many of them in premium locations; or how well Team Europe kept the fans that showed up rooted to their seats, with an unexpectedly strong performance.

Canada hasn't been tested much at the international level recently – not in this tournament, or anywhere else, for that matter, in best-on-best competition since the 2010 Winter Olympics.

But the host team came out dead flat against Europe and couldn't replicate the sustained pressure that characterized the Canadians' play in the first four games of the tournament, in which they outshot their opponents by a significant 177-117 margin.

In the end, Canada rode first-period goals by Brad Marchand and Steven Stamkos to a 3-1 victory and can thus clinch the tournament title with a win Thursday night in the second game of the best-of-three final.

After being the model of defensive consistency throughout the first four games of the tournament, the Canadians made all sorts of inexplicable gaffes and gave up odd-man rushes to the fleet-footed Europeans.

Ultimately, they turned to Carey Price, the Montreal Canadiens's goaltender, to win the head-to-head duel with his former teammate, Jaroslav Halak. Price was the biggest single reason Canada managed the win.

It doesn't seem fair that Canada, which can draw from a deeper player pool than any other team in the tournament at forward and defence, can also turn to the top goaltender in the world when things don't quite go their way.

Price, a mainstay of Canada's 2014 Winter Olympic championship team, is rounding into form nicely after missing all but 12 NHL regular-season games last year, recovering from a knee injury.

Price and Halak have combined for 80 per cent of Montreal's regular-season wins over the past eight years and their showdown was the main subplot of the night's action.

Most figured that for Europe to have any chance, Halak would have to steal the show. Halak had a decent night, but it was Price who came up with the turning-point saves – prominent among them, a stop on an Andrej Sekera on a second-period breakaway that would have tied the game.

It wasn't the only time in the game when things went off the anticipated script.

The feeling was that Europe, under coach Ralph Krueger, would employ a defence-first, trapping style of game against the Canadians, sit back and wait for their chances.

Instead, they came hard after the Canadians from the first shift on and drew a penalty – Marchand for crosschecking – only 21 seconds into the game. Europe held a 9-3 edge on the shot clock after only six-and-a-half minutes of play, but by then it had fallen behind 1-0, when Marchand – stepping out of the penalty box – took a pass from Boston Bruins's teammate Patrice Bergeron to lift a shot past Halak 10 seconds after his penalty expired.

This is what happens when skilled players get a little room to maneuver: Bergeron was almost clear of the European defence when he instinctively flicked a cross-ice pass to Marchand, who needed to fish the puck out of his skates before he could lift it high over the smallish Halak.

Another Bruins' player, defenceman Zdeno Chara, made an unusual gaffe on the second Canadian goal, after Ryan Getzlaf stripped him of the puck in the neutral zone and made a perfectly timed pass to the far goalpost that Stamkos tipped in.

It stayed that way until the seven-minute mark of the second period when Europe's Tomas Tatar was in the right place at the right time to punch in a rebound past Price. Tatar's goal came on Europe's 21st shot of the game and put the visitors right back in the game.

Canada couldn't collectively exhale until Bergeron scored his third of the tournament 9:24 into the third period, on a play engineered by Sidney Crosby. Crosby kept possession of the puck, skating back and forth behind the European net, until Bergeron came in late, took a pass and fired a shot off Halak's body and in to give Canada a 3-1 lead. It was only then that the crowd came to life.

The Crosby-Bergeron-Marchand line now has combined for 22 points in five games thus far in the tournament, to account for the bulk of Canada's offence.

It wasn't pretty, but once again, the Canadians felt no need to apologize for their 15th consecutive victory in best-on-best competition dating back to 2010. 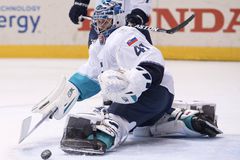 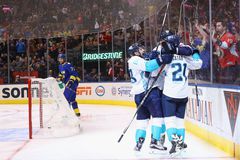 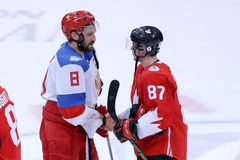