A great many things are said in a hockey dressing room, not all of them important.

Occasionally, however, a voice is heard that makes a difference.

This time it belonged to the Montreal Canadiens' Daniel Brière, who is neither imposing of stature nor timbre; sometimes the message is the thing, and in this case it was 'get this done quickly.'

To set the 36-year-old's exhortation in its proper context, a few moments before he stood up in the Habs' dressing room, the New York Rangers' Chris Kreider – of course it had to be him – had scored a gut-punch of a tying goal with less than 29 seconds to play in the third period.

The Habs had largely been dominated, but had taken an unlikely lead – through Brière, who prowls the post-season stage with the authority of Pavarotti at La Scala – in the late-going.

"He spoke up right before we went out, he said 'listen, it's overtime in their building, they're emotionally high, just scored a big goal, we've got to be ready at the start'," said teammate P.K. Subban.

So it was that on the third shift of the first overtime, Tomas Plekanec – who has been scuffling for three or four games now – controlled a pass from Brian Gionta just inside the Rangers' zone, hesitated slightly, and then zipped a shot-cum-pass that struck goalie Henrik Lundqvist's left leg pad and popped into the air.

Habs winger Alex Galchenyuk had by then reached the lip of the crease, and the puck bounced off his body and into the net.

"Not a top-three goal skill-wise, but one of the most important in my career so far, for sure," said the 20-year-old American, who is just two games removed from a knee injury that kept him out nearly two months. "It was a struggle, obviously, through the injury process . . . I couldn't be more happy right now."

The same is true of the team, which has clambered back into the series after the inspirational words from one of its most battle-tested veterans.

"It was spur of the moment . . . it just sounded good," laughed Brière.

That may be, but it also serves as a handy illustration of what the Habs bring to the table in these playoffs: poised relentlessness.

"It's been the same story all year. We've never given up even when everybody gave us up for dead. When that (Kreider) goal goes in, I'm sure a majority of people that's the end for us, but we found a way, we usually seem to find ways to make a big play," he said. "We believed, which is easier to say than actually do, but this time we did it."

The Rangers still lead and will play the next tilt in their noisy home building, but with a couple of days to kill until Sunday's game four, they'll have some time to think about the one that got away.

"It's obviously extremely disappointing to lose this one . . . it's going to be tough for a couple of hours, but then you have to let it go," said Lundqvist, who after having so much go right for him in the first two games watched providence side with the Habs.

Montreal is under no illusions, however, as to what will be required to level the series, or even get their snouts out in front.

New York was largely the better team – in the way Montreal was in game two – and the Habs must ramp up their game to nourish the tiny flicker of hope created in game three.

"We've played one pretty game and six average periods, we need to be better, we know that, but we're in this series, though." Gionta

They are, and for one night at least, stand-in goalie Dustin Tokarski stopped 35 shots, and kept his team in the game.

"I definitely felt a little more comfortable and in control of my rebounds," the 24-year-old said. "It feels great. It feels real good. But it's a team game and that was a team effort."

That happened in the Stanley Cup final, but earlier that spring Roy, then a rookie, won a pivotal game three – in overtime – against the Rangers at MSG.

It's a tiny bit early to make lofty comparisons (to start with, Roy's team wasn't down 0-2, they were up 2-0), but the native of Watson, Sask., was the story in the first period, thwarting Daniel Carcillo on the doorstep, making a strong save on Rick Nash as he cut across the face of the net, stopping Benoit Pouliot on a partial breakaway, denying Marc Staal by getting a toe on his long shot through traffic.

In the second, he denied Martin St. Louis at the side of the net with a desperation pad save, and then stoned Hagelin, although he couldn't find the puck afterward.

In the final minute of the third, he robbed St. Louis of a goal by getting his glove on a shot that was labelled for the top corner.

Much was made in the New York media of Subban's assertion this week that Lundqvist was unusually lucky in games one and two; good fortune is a zero-sum game in the NHL, only one team at a time can be properly lucky.

And if the Rangers had some measure of fortune on Kreider's goal, which clanked off defenceman Alexei Emelin's skate, and on Carl Hagelin's (which resulted from a brutal Subban turnover and eventually went in after Josh Gorges stopped Martin St. Louis' shot),

"I look at the first goal, I don't think the puck's ever bounced over my stick like that when I pull it back. But that's the game . . . it's a game of mistakes, it's a game of bounces, but most importantly it's a mental game, and the team that can hold it together the longest is the team that's going to have the most success," said Subban.

The main difference with the first two games of the series is the Habs also benefited from some pretty fortuitous occurrences.

"You could see that when pucks bounced, they started bouncing our way a little bit, especially throughout the neutral zone, we were able to get the puck with speed and create chances," said Subban.

St. Louis agreed, saying "they got a bounce (in overtime). That's the way it goes."

The question now becomes whether they can keep coming for the Canadiens.

The home team generated more chances throughout the game and outrageously dominated the first period – shots were 14-4.

The reason for their aggressiveness might be traced to a suspect Brandon Prust hit on centre Derek Stepan at the 2:48 mark.

As Stepan dished the puck and steamed through centre ice, his former Ranger teammate Prust laid a shoulder into him – the hit was late, and high, and from the blind side, but went un-penalized.

The American centre crumpled to the ice (his pass led to Nash's scoring chance), when he eventually left the ice he was incandescent at the officials, slamming the glass.

A few moments later Carcillo tried to extract some revenge by running Prust from behind; he managed to earn himself a game misconduct by slashing a linesman who tried to usher him away from Prust and Derek Dorsett, who by that point had dropped the gloves.

"If there's a penalty to Prust, maybe that doesn't happen," said Vigneault, who agreed that Carcillo deserved to be severely sanctioned.

The league is expected to review both Carcillo's case, and the Prust incident; it's a good bet both will face suspension. 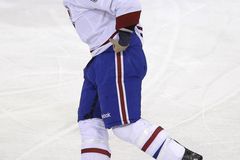 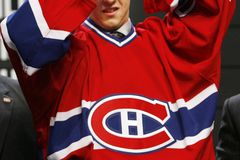 Carter finds himself in the right place, right time
May 22, 2014 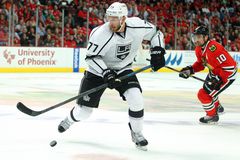 Canadiens confident they have another comeback in them
May 22, 2014 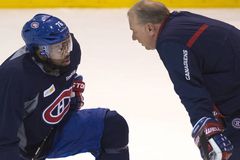 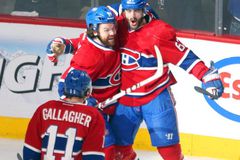