Immediately after the Toronto Maple Leafs hired Mike Babcock as head coach, he warned everyone.

Babcock's first news conference was not so much an exercise in managing expectations, but in hitting them with a rhetorical hammer until they were flush with the ground.

The challenge was "massive," the process would be "long," and every single bit of it would be "tough."

That initial scolding was surprisingly effective.

It didn't just shut up the most hysterical hockey market in the world for almost three years, it turned the most committed doubters into cheerleaders.

Lost again? Great news! It's all part of the process.

Not showing much improvement? These things take time.

Making a developmental U-turn? Well … (googles "failure" and "quotes") … failure is success if we learn from it.

It was a nice, relaxing time to watch hockey in Toronto.

It's over now. We've gone back to the future for the Leafs, which is bug-eyed anxiety about every little thing from now until whenever they win a Cup.

Most of this – all of it, really – falls on Babcock. Where once he could do no wrong, a small dip in upward momentum has put everything back on the table.

Only in this country can the defensive pairings coming out of a morning skate generate enough frustration to power a bitcoin mining operation.

You know Babcock has begun to lose his external audience when the mission is becoming obscured by the minutiae.

This disease is known as Randy Carlyle syndrome. The only two known cures are sustained success or a radical coachectomy. Historically, Toronto has preferred the second method.

"The only time I know about some of these things is when they're brought up in here as questions," said Leafs winger James van Riemsdyk. "Like, I wasn't aware that on Tuesdays during the season when you're playing at home at 7:30 your record is this – or whatever. It's funny."

He said it more like it was funny strange than funny ha-ha.

To defend themselves against funny questions, van Riemsdyk's youngest teammates have mastered the Official Leafs Method of Public Speaking. Their sentences never quite end, the way people tend to do when they're trying to push through a prepared script.

"I hope it will be a turning point for us that kinda turns things around and we get going here and hopefully get on a streak of our own so definitely good win for us but we're moving on to the next game and obviously a hard team," said Auston Matthews before Monday's encounter with Colorado.

It's like this stuff is being fed through a manual ticker in the back of his head. You can't blame him. The best way to avoid public-relations icebergs on the HMCS Maple Leaf is to keep repeating that the ship is on course.

This is why goalie Frederik Andersen's recent, tepid criticism of his colleagues – "lack of effort at certain points" – was so highlighted.

Since his arrival, the only person on the Leafs payroll allowed the freedom to be witty or irreverent is Babcock himself. That charm is his most effective tool.

They're not paying him to diagram the power play. Babcock was a get because he is a big enough name to provide daily reputational cover for a team that no longer had any.

By that measure, he's been an unqualified success. When the fanbase needed an initial talking to, he gave it. When they needed a reality check in year two, he provided that. Now that doubt has begun to seep in again, Babcock invites it on himself. He does it with something close to gleefulness.

"Any way you look at it, no matter what's been said, we've gotten points in six of seven [games]," Babcock said on Monday morning. "We're moving up."

That is not "moving up," and he well knows it. The only way it makes sense is as a way of needling the sky-is-falling crowd.

This must also explain the enthusiasm he has brought to the Lineup Wars, a topic he engages with masochistic zeal.

Let's recap how things have been progressing:

In 2017, they squeaked into the postseason.

In 2018, they will easily make the playoffs. (Also, they played Zach Hyman with Matthews and it didn't always work out.)

I think you're closer to the panic button than I am. Do you mind hitting it, please? Clearly, we are in a state of emergency.

This isn't about lineups. It's about a way of being for Leafs fans.

This market is the guy who insists you drive, then starts pulling at the wheel from the passenger seat. They would like to crowdsource the head-coaching job, which is how this town makes sane men do crazy things.

How's Babcock looking? A little older, maybe. The Leafs job will age you like a U.S. president. But still sane.

It's everyone else who's begun to lose it again. Giving in to that temptation – to criticize the coach for his tactical obstinacy or small dips in individual form or refusing to adjust his timetable – is worse than pointless. It's missing the point entirely.

Mike Babcock wasn't hired to win hockey games in January or do a strategic listening tour with NHL Game Pass subscribers. They've tried that before. It didn't go so well.

He was brought here to develop a sweeping program of his own devising, to implement it as he saw fit and at his own speed. Babcock was especially clear about that last part. It wasn't going to happen quickly. At the time, everyone agreed it was a good idea.

Now, some people want to renegotiate the terms of the deal.

The last three years were a bit of a lark for Mike Babcock. This part – the real pain – was always coming. It's when he realizes that if and when he wins as a Maple Leaf coach, it won't be because of Toronto. It will be despite it. 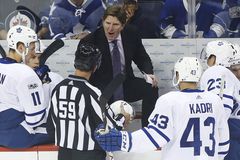 Maple Leafs bring it home in Ottawa on Hockey Day in Canada
January 21, 2018 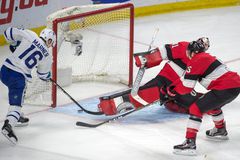 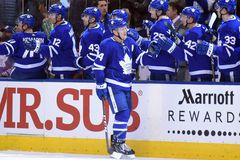