The old, creased image is a study of the hard man in repose; he's laid out on the ice, eyes closed, a youthful, vigorous version of the enfeebled and forgetful man he is to become.

The man in the photo was baptized Reginald Stephen Fleming, one of the more brutish and feared players in an especially unsentimental era in the National Hockey League annals.

He is in full puck regalia, and unconscious.

The picture is a cherished memento that his first-born, 42-year-old Chris Fleming, keeps close at hand.

"When you're playing the game, you're so tough, 'I don't care, I'll die for this game,' and then when you're 50, 60, 70 years old and you're in a hospital and you're in terrible pain, it's a different story," said Fleming, whose father died last summer at 73 after a series of strokes and heart attacks that had confined him to an assisted-care home near Chicago for five years.

Long before the myth of the taciturn, two-fisted loner was appropriated by the Spaghetti Western, it had taken up residence in sports like boxing and the NHL of the mid-20th century.

Few embodied that idiom, and its righter-of-wrongs code, like Reggie Fleming.

He was a mere sapling by the redwood standards of today's NHL - he stood 5 foot 10 and weighed 185 pounds - but his beefy arms and tightly cropped pate earned him the nickname Mr. Clean. It was an appropriate moniker for a versatile player known above all for stepping in to sort out messes created by opponents or overzealous teammates.

Fleming played in the prehelmet days, when the game could be violent.

But there were no late-night highlight reels recapping the day's biggest hits and fights.

"I had to protect guys … it was either going to be me or nobody," an elderly Fleming later told his son in a video diary posted on YouTube.

Reggie Fleming was born in 1936, and spent his early life in Ahuntsic, in Montreal's north end, an Anglo child in a mostly French-speaking neighbourhood.

That meant learning early to stand up for oneself, as did growing up in a rambling brick house with one's parents and grandparents and a raucous menagerie of eight uncles and aunts, many of whom were close to his age.

It's likely around this time that Fleming suffered his first concussion - he is said to have suffered as many as 20 - although classmates from the period don't recall any particularly gruesome incidents.

But even then, Fleming showed glimpses of the hard-boiled, relentless style that would make him famous.

"He was a tough character even then, but had tremendous hockey sense," said Peter Vanier, who played hockey and football with a young Fleming at D'Arcy McGee, winning multiple city championships.

After trying and failing to make the Montreal Junior Canadiens, Fleming earned a spot on the team in 1953. It was then directed by Sam Pollock, who made it clear Fleming's future would be assured with his fists.

Relatives remember Fleming as being consumed by hockey, and leaving home at 18 to turn pro (he never made it past Grade 11 at D'Arcy McGee) and make his name as a rough-houser.

"He was a very quiet guy when he was off the ice," said his first cousin, Gerry Fleming. "It was just a job that he did." Hockey can be fairly described as the family business.

Gerry worked at the Montreal Forum for 14 years as a security guard (often behind the players' bench) and his son, also named Gerry, played 11 games for the Habs in the 1990s. A tough player in his own right, Gerry Fleming Jr. spent eight seasons in Montreal's farm system.

He, too, can tell you about concussions.

"You'd sit in the penalty box after taking a punch in the head, and all of a sudden the right side of your vision would go black. Or your left. Usually it was back by the time the penalty was over," said Fleming, now an assistant coach with the Springfield Falcons of the AHL. "You just shook it off and didn't really think anything of it."

By the time he landed in the NHL, Reggie Fleming had already spent five years as a minor-pro player with stops in places like Shawinigan Falls, Rochester and Kingston.

After a three-game pro tryout with the Canadiens in 1960, Fleming was bundled off to Chicago as part of a nine-player deal.

"Reggie was a hard-working guy, a great teammate, he was a little shy on talent, but he worked through that, and off the ice he was a true gentleman," said Bill Hay, who won a Stanley Cup with Fleming on the 1960-61 Chicago Blackhawks.

In that final series against Detroit, Fleming had perhaps his finest professional moment, stripping the puck off an opponent in his own end, racing down the ice and scoring to tie a game the Hawks would win 5-1.

Hay can relate endless stories of on-ice mayhem, but doesn't recall any specific incidents of Fleming getting knocked out, but said: "It happened to all of us, that was the game back then. In those days we healed in the summertime."

Fleming played 12 full seasons in the NHL - he also suited up for Boston, the New York Rangers, the Philadelphia Flyers, and was an original Buffalo Sabre. He also played a couple of years in the WHA for the Chicago Cougars before finishing his career in various semi-pro scrub leagues.

The view from the end of the pro hockey road can be bleak, and Fleming reached it in 1978, at 42, while playing with the Kenosha Flyers of the Continental Hockey League.

Some cope with abrupt retirement better than others, and after 22 years of having known little else, Reggie Fleming tried hard to deal with it, but couldn't. Not completely.

"I remember, he would come home and put his chair right in front of the TV, just a few inches away, and he would sit there and drink a case of beer, eat a whole gallon of ice cream," Fleming's son recalled. "He'd be waiting for the phone call to come to say he was being picked up. He never was."

That bout of severe depression, which led to financial problems and a divorce, was only a foretaste of what was to come.

"He would have certain outbursts, manic-depressive outbursts … some of it must have to do with [hockey] not thinking too clearly, not remembering," said Chris Fleming, whose younger sister Kelly also lives in Chicago. "He'd ask me a question, and I'd have to remind him that, dad, you just asked me that question five minutes ago. And that was way before he was in the hospital, that was like 15 years ago."

About 10 years ago, Fleming started having niggling physical problems, and in 2004 he suffered the stroke that would restrict him to his bed in a rehabilitation and convalescence centre.

Chris Fleming's visits spawned the idea of conducting a series of videotaped interviews - the two had talked about writing a book but there wasn't time - that he later posted on the Internet. The videos are alternately touching and heartbreaking. Fleming shows flashes of his legendary querulousness, and a lively sense of humour. But at other points he struggles with his memories, and occasionally becomes sullen or combative.

But the reconciliation is complete by the final instalments, where he and Chris watch videos of past games and battles. In the most moving passage, he tells his children how much he loves them, his voice barely audible.

"If it wasn't for the whole events to occur with my father, I don't think he would have reflected upon his life," Fleming said. "He was thinking about his life over and over, every day, and there's so many things he would have changed. The biggest thing was he wanted people to know he loved them."

Former NHLer had condition linked to concussions at time of death
December 17, 2009 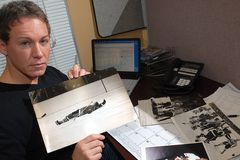 Follow Sean Gordon on Twitter @MrSeanGordon
Report an error
Due to technical reasons, we have temporarily removed commenting from our articles. We hope to have this fixed soon. Thank you for your patience. If you are looking to give feedback on our new site, please send it along to feedback@globeandmail.com. If you want to write a letter to the editor, please forward to letters@globeandmail.com.
Comments