There's a line between rest and idleness, the Montreal Canadiens are mindful of smudging it.

Ask a professional hockey player, who typically gets little more than four contractually obligated days off per month during the season, to suddenly put his feet up and switch his brain to the off position for a few days and, well, it's weird.

In most cases, it feels good to break with routine, particularly when you consider the rigours and strain that lie ahead.

"I've got more than enough to do at home. I've spent some time off now, I'm on daddy duty and it gets my mind off hockey," said Pacioretty, whose wife gave birth to the couple's first baby, a son, in January.

Presumably that means handling a lot of soiled diapers, right?

"I'm embarrassed to say I haven't changed one yet," he said.

Folks, we have our first playoff controversy in Montreal.

"But I'm helping out in every other department," Pacioretty said in mock protest as a media throng needled him, adding, "I'm going to go home today and change one."

Being a well-established Hab with a long-term deal and a house is one thing, but what of the players who were scooped up at the trade deadline and are bunking in hotels, such as Mike Weaver?

The 35-year-old defenceman's family is still living in Florida, where he spent four seasons with the Panthers.

Weaver spends much of his free time hanging out with high-profile trade acquisition and fellow inn-dweller Thomas Vanek, whose family is in New York State (he joked that when well-wishers approach Vanek in restaurants or coffee shops, they assume his companion – Weaver – must be some guy who works for the team.)

The Canadiens were rewarded with two consecutive days off after ousting the Tampa Bay Lightning earlier this week, and Vanek dashed off for a quick family visit.

"And I was, like, 'I've got nobody to hang out with,'" Weaver laughed.

So he reserved a table for one and spent some time checking out his surroundings.

"It's been a while, so it was actually pretty good," he said.

Levity aside, there is some truth to the oft-repeated idea that rest is a weapon.

"We hope to have a season that goes much longer, now's a good time for me to get into the weight room and build up some strength," said Pacioretty, one of seven Habs who didn't have the benefit of an Olympic break.

In addition to the physical toll – when winger Dale Weise was asked this week about how many players in the Habs' room were playing hurt, he said "all twenty-three, or however many we are" – there is a psychic one.

"Whether you say it or not, you're always worried about your game, how you play, and knowing you've got to play better; there's a stress level that comes with our job and for me now, and most of the guys too, we're completely stress-free right now," Pacioretty said.

The NHL schedule is punctuated by time to recover physically from one's exertions – napping opportunities for the pro player are plentiful – but that doesn't mean it isn't a grind.

Weaver said pretty much the only way to survive the slog is to embrace it.

So after their short respite, the Habs were back on the ice Friday, and will steadily ramp up the effort level and practice intensity until the second round is set to begin – which could happen as early as April 30 or as late as May 2 or 3.

Injured winger Travis Moen, who is recovering from a concussion, was among the group, and he's been cleared to return.

The other absentee, forward Alex Galchenyuk (who is out with a lower-body injury, believed to be a knee), could feature at some point in the second round, but has not yet resumed skating.

This interlude is also a benefit to the coaches, who have more time to plot and scheme.

Neither the Boston Bruins nor the Detroit Red Wings, who will play an elimination game Saturday, are much of a novelty.

Game-planning was a key to the Tampa series – coach Jon Cooper referenced the fact that Montreal used a different approach to transitions and breakouts – and will assuredly be one again.

Therrien said the break "has to be used to our advantage."

The Habs' lineup in round one was designed at least in part to neutralize the Lightning's speed. When pressed as to whether he'll similarly tailor his bench in round two, Therrien said, "I don't want to go there. Don't forget, I like to play poker."

Guess we know what he was up to during his time off.

This story was corrected to show that Max Pacioretty's first child is a son, not a daughter.

Gordon: Self-assured Habs are their own biggest believers
April 23, 2014 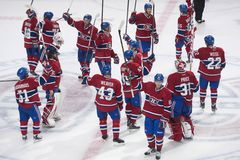 With stout defence, Montreal proceeds to round two
April 22, 2014 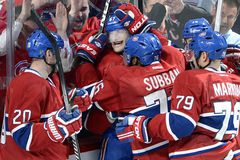 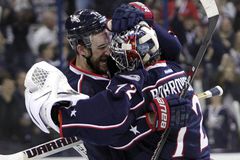 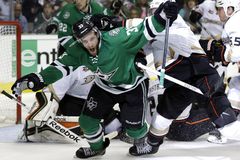