The NHL is separating Rogers Communications from $5.2-billion in cash over the next dozen hockey seasons.

So Rogers really needs to separate as many Canadians as possible from their cash.

Hence Monday's unveiling of the GamePlus feature within Rogers NHL GameCentre LIVE, the company's live-streaming service that will carry most of the games Rogers televises now that it holds the league's Canadian national broadcast rights. GamePlus is an app that will run on mobile and tablet devices that Rogers hopes will have enough bells and whistles to satisfy the hardest of diehards and geekiest of geeks – new camera angles, exclusive video, analysis, replays and your social media feed.

"Exclusive to Rogers customers, it is the ultimate second-screen experience," Rogers Media president Keith Pelley said. "It allows our customer to select replays, pick camera angles, be the producer, director and get inside information."

But here's the rub for Canadian hockey fans. If you want to call up the view from the ref cam , or see eight replay angles compared with the regular viewer's two or three, you need to become a Rogers customer. Anyone who has access to a computer, tablet, smartphone, even a competitor's cable, satellite or Internet service, can buy GameCentre for $179.99 for the season if you sign up before next Monday ($199.99 if you drag your feet).

But only those who have a connection to Rogers – through the Internet, cable television, wireless or a home telephone, and subscribe to GameCentre – can get GamePlus. And by the way, GameCentre is free until Dec. 31 to anyone who has a Rogers wireless or Internet account.

So if you want to see a play develop as the referee sees it – or see the ref blow a call in real time – you had better open your wallet for Rogers.

Rogers executives admitted some of the GamePlus features are still being ironed out. But the package is tempting to those who cannot get enough hockey. Or enough reality television. The POV (point-of-view) cam, for example, which is nestled just under the boards and looks up at the players' benches, didn't miss much when it came to players horking up a good one.

There is also the goal-line cam, which offers the same view the NHL's war room sees when a video review of a goal is made; another POV cam runs along the top of the glass between the blue lines; a sky cam runs on a cable around the upper reaches of the Air Canada Centre; and there will be one camera isolated on one player for the entire game. For Wednesday's NHL opener between the Montreal Canadiens and Toronto Maple Leafs, the star cam, as the isolation one is known, will be on Leafs winger James van Riemsdyk. The sky cam is only available at the ACC right now, although Pelley said the plan is to put one in each of the seven Canadian NHL arenas.

Theoretically, if you have GamePlus, you can watch the main telecast of the game on your high-definition television and use your tablet to watch the camera angles of your choosing plus the other video and analysis.

There may also be some trouble ahead with the NHL types who are directly involved with the cameras. Players, for example, have been known to drop towels on bench cameras they find intrusive. And not every referee will be thrilled about having his view of the game on display for second-guessing, although Pelley said the officials are supportive.

"The referees are not against it because there's that argument that happens all the time in the NHL: Why did the close referee not make the call and the guy 80 feet out made the call?" Pelley said. "What you can see on the ref cam is he was blocked, he couldn't see the infraction."

Okay, what if the ref cam shows he was blocked and made the call anyway or simply blew the call? "Hey, they're still human, they make 95 per cent of their calls correctly," Pelley said.

That remains to be seen.

Rogers' Hockey Night in Canada will be a whole new game for viewers
May 12, 2018

Cherry’s sidekick Ron MacLean is kicked further aside
May 12, 2018 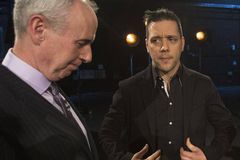 Gary Bettman still going strong after more than 21 years at the helm
May 12, 2018 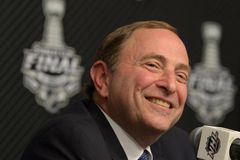