Rogers Media is finally starting to see a payoff from its billion-dollar bet on NHL hockey thanks to the return of five Canadian teams to the playoffs.

The atmosphere is far more festive around Rogers' Toronto headquarters than it was a year ago. In 2016, all seven Canadian teams missed the playoffs, and the television ratings took a 61-per-cent nosedive from 2015, averaging 513,000 viewers for the first 20 games of the first round of the playoffs.

However, the Toronto Maple Leafs, who played beyond expectations to make the playoffs for the first time since 2013, led a resurgence along with the Montreal Canadiens, Ottawa Senators, Edmonton Oilers and Calgary Flames that will see hockey audiences back in the seven-figure range.

CBC, Sportsnet and the other networks carrying Rogers' national hockey package already saw healthy increases in the regular season after TV audiences declined by 16 per cent in each of the first two seasons of the 12-year, $5.2-billion national broadcast deal that Rogers made with the NHL.

On March 25, for example, 2.08 million viewers watched the Leafs play the Buffalo Sabres in the early Hockey Night in Canada game on CBC and Sportsnet. Once the Leafs' fortunes plunged after their surprise playoff appearance in 2013, the only time TV audiences hit two million or more was when the Leafs were playing their arch-rivals, the Canadiens. In fact, their audiences were often less than a million.

"Obviously, team performance drives a lot of it," Sportsnet president Scott Moore said. "I feel like there's a lot of excitement about the sport generally and in some key markets. For us, that's obviously good."

Also playing a role in the better ratings – albeit not as great a role as the success of the Canadian teams – is the decision by Moore and his fellow broadcast executives to return Hockey Night in Canada to the style it had under CBC's management – before Rogers took it over in the 2014-15 season.

Gone are the glitzy, high-tech studio effects such as see-through floors that double as hockey rinks. The discussion panels are back, and, more importantly, Ron MacLean is back as host after the two-year experiment with George Stroumboulopoulos, who was supposed to appeal to a younger, hipper audience. Despite their complaining on social media, it seems Canadian viewers are more comfortable with the old pair of slippers that was Hockey Night in Canada for generations before Rogers came along.

"One of the pillars of our brand is innovation," Moore said. "You want to be careful that innovation doesn't become change for change's sake. The viewers really feel they legitimately have an ownership stake in Hockey Night.

"You can literally change too much. I think in the excitement of the new contract we changed a fair bit. One of the things about Saturday night hockey is it's comfort food. It's something Canadians are really familiar with, and the tradition goes back 63, 64 years."

To that end, Hockey Night in Canada will stay on CBC for at least one more year. When Rogers shocked the hockey world by grabbing the Canadian national rights away from CBC and TSN, it cut a deal with the public network to carry the Saturday night show for four years. All of the advertising revenue goes to Rogers, while CBC is allowed air time to promote its own shows. Rogers had an option to extend the deal for a fifth year and quietly exercised it.

Moore said he would like to extend the relationship with CBC beyond the 2017-18 season and hopes talks begin soon.

One sign of Rogers' eagerness for another deal is that it agreed not to schedule any playoff games on CBC for the first four Sunday nights of the postseason, allowing CBC to carry its history series, Canada: The Story of Us, without being pre-empted by hockey.

Not all the changes were happy, though. The falling ratings cut into revenue, which cost a lot of on-air and behind-the-scenes people their jobs. Glenn Healy was let go from the No. 1 broadcast crew, and his acerbic analysis is missed. However, staffers say morale is on the mend.

"When you make such a major change, it takes time to feel out the things that work," said Nick Kypreos, a Sportsnet regular who joined Hockey Night in Canada for the 2014-15 season. "Unfortunately, we had to do it every night in front of a million and a half people, and of course the world's changed with social media. People have more access than ever before to voice their opinions. Sometimes they are positive, and sometimes they can challenge you.

"We're a new group, relatively speaking. There are people experienced in this business for 30, 40 years, but all of us together have only been together for 2 1/2 years. Although people may beg to differ, I think on a 12-year deal we're starting to hit our stride and we're not fully three years in."

What viewers now see on the show, as well as Rogers' other national broadcasts, is what they grew up watching. There is MacLean back in the host's chair on Saturdays, and he remains by the side of Don Cherry during the first intermission. There is usually a feature on a player and then, in the second intermission, MacLean and the panel – Kypreos, Kelly Hrudey and Elliotte Friedman – discuss the issues of the week.

Also back after an absence of a few years is After Hours, the interview show with host Scott Oake, which airs after the western game of the Saturday night doubleheader. That was part of the production team's move to more storytelling.

"We wanted to get back to that grassroots feel, and that's where a show like After Hours hits home," said Rob Corte, Sportsnet's vice-president of production. "It brings a little more focus on the second game in the West. It also gives us an opportunity to spotlight some of the players in that game."

MacLean officially returned as Hockey Night in Canada host for the preseason World Cup of Hockey tournament. He said that served as an important warmup for the NHL season.

"The first World Cup broadcast felt really comfortable," he said. "It felt like, for whatever reason, the minute we sat down and went to work, it was comfortable and I was grateful for that.

"I felt a sense of relief because, I don't care who you are, when there's that much commotion about something there's a little trepidation, but it never felt that way once we got to work."

He agreed to return to his old role as host of the eastern game on the show only if he could stay on as host of the Sunday night show Hometown Hockey. That show is broadcast live on location in various Canadian towns and cities with MacLean and co-host Tara Slone, which makes for a busy weekend of travel. MacLean admits it can be tiring, but he likes the Sunday show too much to give it up.

"The Sunday show was pennies from heaven for me," he said. "It's a show I felt cut out to do from all my years of [being a referee around Ontario] to being a military brat.

"Saturday night will always be the big one, but in my dreams, someone is going to inherit Hockey Night and maybe [Hometown Hockey] can be my landing place again one day." 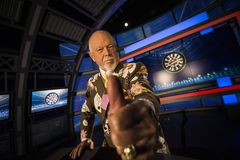 Hockey Night in Canada and the resurrection of Ron MacLean​​
October 14, 2016 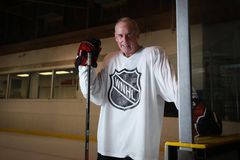