The first thing to point out is that nicknames are key in a hockey dressing room, as big a part of the atmosphere as shower sandals and card games.

So what to do when you have two players who go by the same handle?

This is a problem the Montreal Canadiens now have to grapple with.

Forward prospects Brendan Gallagher and Alex Galchenyuk will both be on the Habs' opening day roster, a major achievement for both players in an organization with a history of being conservative with its prospects.

That's all well and good, but there are larger stakes here: who gets to be called 'Gally'? Both players have gone by that nom de guerre for basically their entire hockey lives.

"I think there's only one now. He's over there," the 18-year-old Galchenyuk, said, nodding at Gallagher. "He's been here, what, three or four years now, so I guess my nickname is changing."

Three or four years? Sorry Alex, but you've been had.

Gallagher is at his third training camp, but in just his first pro season, and he too could be making his NHL bow on a Saturday night on Hockey Night in Canada against the Toronto Maple Leafs.

But the two have been bunking together at a hotel near the team's practice facility, so perhaps the former Vancouver Giant standout has been applying some subtle psychological pressure to his new teammate - brainwashing is such an ugly word.

"I pulled seniority on him. At 20," laughed Gallagher.

So did he feel any obligation to find a new nickname for his roommate?

"The guys have been calling him Chucky a little bit, so that may stick. But when I hear that I think of the doll, so that's pretty funny for me. I'm just happy I won this battle and get to keep my nickname," said Gallagher, who is small in stature but makes up for it with a huge personality.

It's not a certainty that Gallagher will be in the starting lineup for the season opener - there's a chance he could be the 13th forward - but Galchenyuk's name has already been written on the team sheet, he'll play left wing on the second line alongside Tomas Plekanec and team captain Brian Gionta.

The team has five games to decide whether to keep him with the big club for the remainder of the year or sent him back to his junior club, the Sarnia Sting.

There are financial considerations at stake - keeping him would burn off the first year of his three-year entry-level contract. But it may well be worthwhile if he can contribute immediately on a scoring line.

Habs coach Michel Therrien - who will coach his 500th NHL game on Saturday, 10 years and one day since he was dismissed in his first go-round with the club - said the team is sensitive to surrounding their prize recruit with 'quality people'.

Interestingly, he said that applies both on and off the ice, suggesting the team has at least considered an extended stay for Galchenyuk.

After all, Therrien has previous on that score: when he coached in Pittsburgh, all-world rookie Sidney Crosby bunked at Mario Lemieux's house.

The odds-makers' favourites to host Galchenyuk, should he stick around beyond the five games, are veteran winger Erik Cole and Gionta, both of whom live a short distance from the team's suburban practice facility.

"It'd be nice to have a babysitter around all the time, huh?" said Gionta, who has three young children.

Gallagher, meanwhile, has spent previous stints in Montreal rooming with fellow B.C. native Josh Gorges, and might expect to crash his guest room again - assuming he stays with the team after injured fourth-line centre Petteri Nokelainen returns to fitness.

It's a different way of doing things for the Habs, who left goaltender Carey Price to his own devices when he joined the team as a 20-year-old in 2007.

But Galchenyuk, in particular, presents a special case.

The team's highest draft pick since they chose Doug Wickenheiser first overall in 1981, he is a fabulously talented player.

He's also the son of a former pro hockey player - Alexander Galchenyuk, Sr., will be driving up from Sarnia to sit in the stands on Saturday with his wife and daughter - and appears unusually poised for his age.

Which doesn't mean he wasn't nervous on his first cut-down day.

He and Gallagher left the hotel before 8 a.m. on Friday to get to the Bell Centre bright and early.

What he did was start counting the equipment bags of players being sent down to the minors - Louis Leblanc, Patrick Holland, Jarred Tinordi, Michael Bournival, Gabriel Dumont, Frederic St-Denis, Mike Commodore.

"Then Gally went in for his meeting and said he made it. I was the last one to go in, so I was fairly confident by then," he said.

Asked what Therrien and general-manager Marc Bergevin said, he replied "I don't remember the exact words, I was kind of nervous."

Galchenyuk, who comes across as something less than excitable in his interactions with the media, doesn't look like the nervous sort, and he's approaching his first NHL game as if it's a one-off.

Therrien wouldn't confirm the young winger will be around beyond Saturday, but it's a safe bet he will be unless he looks completely overwhelmed by the pace of a regular season NHL game - doubtful.

Beyond his two new players, Therrien has made the decision to keep big journeyman winger Mike Blunden on the roster.

Other than Nokelainen, he expects to have a healthy lineup.

Goaltender Carey Price tweaked a leg muscle during Thursday's intra-squad game - played before more than 17,000 people, many of whom braved -20 degree weather to get a place in line (who says the lockout damaged the fans' attachment to the Habs?) He was excused from practice on Friday, but Therrien said "he told me 'don't worry coach, I'll be there'." 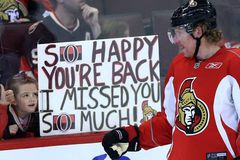 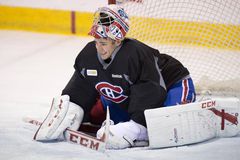 More relaxed Therrien expects “No Excuses” during second stint with Habs
May 11, 2018 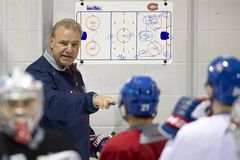 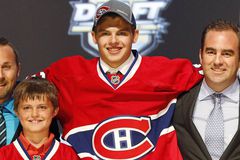