An entire team of Russian teenagers has abruptly pulled out of a marquee international tournament on Wednesday amid one of the biggest mass doping scandals in hockey history.

At issue, again, is the controversial drug meldonium, which according to USA Today has resulted in positive tests in 140 athletes – mostly Russian and including tennis star Maria Sharapova – since it was banned in January.

The latest scandal surrounds Russia's under-18 team, which was scheduled to leave Thursday for next week's world championship in Grand Forks, N.D.

Instead, head coach Vitali Prokhorov was abruptly removed from the team, and it was revealed that Russia's under-17 team would take the under-18 group's place. The Russian hockey federation declined to make an official comment and a scheduled team media availability was cancelled.

It is believed that roughly 80 per cent of the players had tested positive for meldonium. Russia's under-18 team recently became a year-round club that plays in the MHL – the country's new junior circuit – and adherence to its team-wide policies isn't usually optional.

Among the players now unable to play in the under-18 championship are some high-end prospects eligible for the 2016 NHL draft: German Rubtsov, Artur Kayumov, Dmitri Alexeyev and Mikhail Maltsev. Rubtsov is projected to go in the top 20 in June.

One source close to the players said they were devastated by the decision, as they had simply been following instructions from team staff when they took the drug.

Meldonium's benefits have been intensely debated since the World Anti-Doping Agency instituted the ban on New Year's Day. Manufactured in Latvia, it is designed to increase blood flow and used to treat patients with heart problems such as angina. WADA has argued the drug is being used by athletes as a performance enhancer in order to carry more oxygen to muscle tissue.

Sharapova is the most high-profile athlete implicated, but breaststroke world champion Yuliya Efimova and gymnast Nikolai Kuksenkov also tested positive for meldonium during recent competitions. Efimova could face a lifetime ban given this is her second failed drug test.

While the NHL does not yet test for meldonium, the drug is believed to be used extensively by Russian and Eastern European hockey players, which could cause issues at events such as next month's world championships in St. Petersburg.

Part of the problem is that the drug is believed to stay in athletes' system for an extended period of time – up to a few months – so it's possible the Russians on the under-18 team stopped taking meldonium before the ban was put in place.

The decision to drop the players involved could have ramifications for their careers. The under-18 world championship is used as a key scouting opportunity before the NHL draft and not being able to play could have an impact on how high they are picked or whether they get selected at all.

In addition to the under-17 team, it's expected several Russian players playing in the Canadian Hockey League will be permitted to go to the tournament. Defenceman Mikhail Sergachev of the Windsor Spitfires, who is projected to be a top-10 pick in June, and winger Vladimir Kuznetsov of the Acadie-Bathurst Titan are likely options.

One of Russia's under-17 coaches, Igor Znarok, told local media: "Yes, we're going there. And we are going to get the medals." Kelly: Whether true or false, Maria Sharapova teaches all cheaters a lesson
March 7, 2016 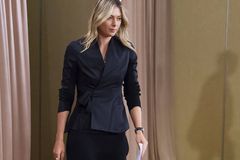