Ryan Spooner had two goals and Tuukka Rask stopped all 25 shots he faced as the Boston Bruins shut out the Senators 5-0.

The Bruins (21-10-6) beat Ottawa for the second time in less than a week after posting a 5-1 victory four days ago.

Mike Condon stopped 29 shots for the Senators (12-17-8), who were coming off a come-from-behind 5-4 win over the Columbus Blue Jackets a night earlier.

The loss leaves Ottawa with a 4-8-2 record in December and it was shut out five times. The Sens are now 4-14-3 in their last 20 games and have been outscored 14-6 in their last three games.

The Senators have little explanation for why things have gone sideways this season.

"At this point I don't really know what to say, it is what it is," said captain Erik Karlsson. "We've got to find a way to build off something and try and get something going for ourselves and we're doing the best that we can, but as of right now, it's not working in our favour and we're not doing ourselves any favours either."

Boston jumped out to a commanding 4-0 lead in the second by scoring three goals on 13 shots.

Sean Kuraly provided a screen for Acciari, who beat Condon off his backhand for a 2-0 advantage. Just over two minutes later, Ben Harpur, looking to shoot the puck in at the blue line, had his shot picked off by Spooner, who in turn broke in alone and beat Condon through the legs.

Krejci, returning to the lineup after missing six games with an upper-body injury, then picked up a Charlie McAvoy rebound and tucked it in at the side of the net on the power play.

"We took over the game," said Rask. "Their chances came early and that's it. We scored more and we always played the same way and that's great to see. Going ahead that has to continue because that's going to reward us in the future."

The Bruins took a 5-0 lead in the opening minutes of the third as Bergeron tipped a Torey Krug shot for their third power-play goal of the game.

The Bruins opened the scoring at 8:13 of the first on the man advantage. After a couple of solid saves by Condon, a rebound popped right out to Spooner.

This marked the last game of 2017 for both teams. 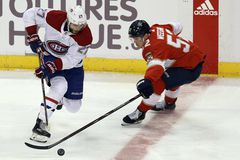 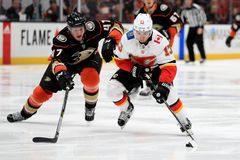 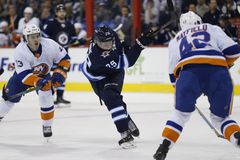