Mike Santorelli has vivid memories of growing up a fan of the Vancouver Canucks.

He recalls going to Game 4 of the 1994 Stanley Cup final as an eight year old — the night that New York Rangers goalie Mike Richter made a memorable penalty shot save on Vancouver superstar Pavel Bure.

"My dad and I went," Santorelli said recently, the excitement still in his voice. "It was at the Pacific Coliseum and Bure was taken down on that partial breakaway ...

"Everyone was standing. It was wild."

The Canucks lost that night and went on to lose the series in seven games. But nearly 20 years later, that young boy in the stands from nearby Burnaby, B.C., is making an early mark with his hometown team.

The 27-year-old Santorelli has been one of Vancouver's biggest surprises so far in 2013-14, scoring four goals — including two in overtime — in his first seven games.

"It's obviously the dream of every Vancouver minor hockey kid to get a chance to play for (the Canucks)," he said. "It's been unbelievable."

Santorelli, whose uncle works as a security guard at Rogers Arena and chats with his nephew after every game, has become a favourite of new head coach John Tortorella, sometimes finding himself on the Canucks' top line with Henrik and Daniel Sedin when the team needs a spark.

"Everywhere I put him, something happens," Tortorella said after Santorelli's overtime goal against New Jersey last week. "Right now, everything I do with him, he does great things for us."

But there were no guarantees Santorelli, a sixth-round pick of the Nashville Predators back in 2004, would even be in the NHL when he signed with Vancouver as a free agent in July.

A 20-goal man with Florida back in 2010-11, the six-foot, 189-pound forward scored just 11 times the last two seasons. He was placed on waivers by the Panthers during the lockout-shortened campaign and was claimed by the Winnipeg Jets, who allowed him to enter free agency.

With the salary cap coming down and the league's middle class of players getting squeezed, Santorelli's deal with the Canucks — a one-year, two-way contract that pays him $550,000 in the NHL, but just $250,000 in the minors — was a big-time pay cut from the $1.6 million he made each of the previous two seasons.

Santorelli came to training camp in great shape and with something to prove, finishing first in Tortorella's gruelling two-mile clocked run, bettering the times of the fitness-obsessed Sedin twins.

He earned a spot on the roster after a strong pre-season and has played more than 20 minutes in three of Vancouver's first seven contests, including Tuesday's 3-2 victory in Philadelphia over the Flyers that kicked off a seven-game road trip.

"I just want to go out there and play the way that makes me successful," said Santorelli, who has 37 goals and 26 assists in 215 career games. "Each day you've got to come out and prove yourself and that's what I want to keep doing."

Henrik Sedin said Santorelli's nose for the net was no secret after the numbers he put up with Florida (41 points in 2010-11). It's the things he does without the puck that have been a pleasant surprise.

"We know he's able to put up points, but he logs a lot of minutes for us, he plays in every situation," said the Canucks captain. "That's what you need as a team, to have younger guys who are not supposed to maybe play as many minutes stepping up."

Canucks defenceman Kevin Bieksa, who assisted on Santorelli's overtime goal against the Calgary Flames in the third game of the season, said Vancouver-area products who find success with the team they grew up rooting for is a bonus.

"It's new energy for us. I've been here for a while and I like seeing the local guys come in," said Bieksa. "They grow up cheering for the Canucks, and coming to Canucks games as kids.

"When they get a chance to play it seems they bring a lot of emotion and a lot of passion to the team."

A foolish chemistry experiment by the Canucks
October 16, 2013 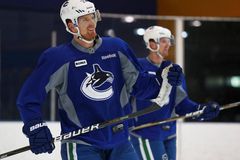 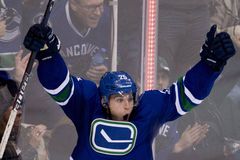 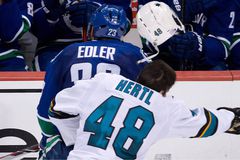 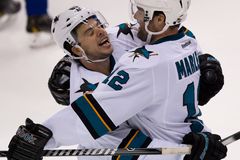