Tied 1-1 after three shooters with Marian Gaborik scoring for L.A. and Jiri Hudler responding for Calgary, Monahan improved his record in shootouts to 5-for-8 on the season, firing a shot past Jonathan Quick for his fourth shootout winner.

Karri Ramo then clinched the victory with a stop on Mike Richards. The Flames goaltender made 41 saves in regulation, and added a huge stop in overtime as Jarret Stoll tried to jam the puck over Ramo's outstretched pad but couldn't despite repeated attempts.

Stoll, Anze Kopitar and Jordan King scored for Los Angeles (45-28-7). The playoff-bound Kings, locked into third spot in the Pacific Division, are winless in four of their last five.

Trailing 3-0 at one point, the Kings got tied the game 3-3 at 12:18 of the third, taking advantage of a turnover in the Flames end by Calgary's rookie winger Bryce Van Brabant, playing in his fifth career game.

After Van Brabant clearing attempt was intercepted at the Flames blue-line, Jake Muzzin's shot was deflected in by King, who was screening Ramo.

It was the 15th goal of the season for King and his third in his last four games. The left-winger had missed the previous four games with an undisclosed injury.

On the heels of eight consecutive road wins, Los Angeles has just one point to show for the first three games of a four-game road trip, which wraps up Thursday in Edmonton.

Calgary opened the scoring when Galiardi scored the lone goal of the first period at 11:58. Galiardi had struggled all season offensively but a rare shift with one of the NHL's hottest players in Mike Cammalleri resulted in his fourth goal.

Set-up in the slot by Cammalleri, Galiardi made a nice move before putting a backhand past Quick.

Galiardi then turned playmaker, stripping the puck from Justin Williams along the sideboards and setting up Monahan. The Flames rookie put a quick shot past Quick to make it 2-0 four minutes into the second period.

It's the first time a Calgary rookie has scored 21 goals in a single season since Jarome Iginla in 1996-97.

The Flames took advantage of another Kings turnover to surge in front 3-0 at 15:28 of the second. This time it was Stajan who eventually had a bouncing puck come to him and he scored his 14th of the season.

However, the Kings struck back right away with goals 24 seconds apart to get back to within one.

After Stoll's deflection of Slava Voynov's point shot at 16:09, Kopitar scored his 26th on an individual effort.

Picking up the puck in front of the net, Kopitar carried it behind the net, and back out the other side, making a slick move to elude Monahan as he curled into the slot to zip a backhand past Ramo.

Starting for the ninth time in the last 10 games since coming back from a knee injury, Ramo did his part in goal for Calgary, improving to 17-13-4 on the year. Ramo had a shutout streak of over 124 minutes before the Kings finally got on the scoreboard.

Notes: There were no penalties to either team in the game. For the Kings, it was the first time that had happened since Feb. 19, 1977. That had never happened for the Flames since the team moved to Calgary. ... Kings defencemen Drew Doughty (shoulder) and Robyn Regehr each missed their second game as they nurse minor ailments. ... Calgary C Matt Stajan (personal) returned after missing three games. ... Flames LW Paul Byron (personal) missed his fourth game. ... The Kings had won six games in a row in Calgary.

A five-step plan for new team president Linden to fix the Canucks
May 12, 2018 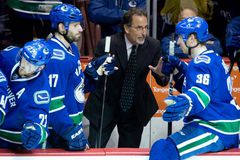 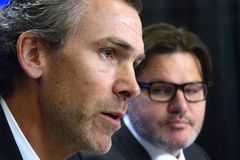