The Sedins are signed.

The Vancouver Canucks have struck a deal with the 33-year-old twin brothers, Daniel and Henrik, who are in the last season of matching five-year, $30.5-million (U.S.) deals.

The extensions, which take them through the 2017-18 NHL season (when they will be 37), are four years for $28-million – a raise of $900,000 per season over the course of the contracts. The deals' value is generally in line with other players of comparable age and skill.

The deals were in the works for four months and Canucks general manager Mike Gillis said "it would have been impossible" to replace the Sedins on the free-agent market had the twins left Vancouver for more money elsewhere.

"These two guys are the pillars of our hockey team," Gillis said at a midday Friday press conference at Rogers Arena.

"It's a fair deal for everyone," Henrik Sedin said on the dollars and years.

The most stirring defence and lauding of the brothers came from new head coach John Tortorella, who colourfully took on the critics of the Sedins over the years, who have called them soft.

"Our league is Neanderthal … when they call the Sedins soft," Tortorella said after practice Friday ahead of a Saturday contest against the visiting Toronto Maple Leafs.

"They don't have a clue what these guys are about," Tortorella said. "Our league, we act like idiots sometimes."

Tortorella noted the Sedins' tough play to protect pucks, against the boards, and "under the hash marks."

This season, after two years during which the Sedins' scoring prowess sunk somewhat, has been a boon for the brothers. Prior to Friday's games, Henrik – the Canucks captain – is tops in the NHL in assists (15) and tied for second in points (18). Daniel is seventh in points with 15. (Both brothers have won the league's scoring title, Henrik in 2009-10, and Daniel in 2010-11.)

They have also displayed their top-end fitness and durability this year. Henrik is now sixth on the NHL's all-time list of consecutive games played with 643, second among active players, a couple games behind Jay Bouwmeester. In that span, Daniel has only missed 29 games, sidelined by two different injuries in a decade.

In terms of ice time this year, their workload is extraordinary, as Tortorella leans heavily on his best players. Henrik is third in time on ice, 22 minutes 45 seconds a night, and Daniel is fourth at 22:22 (a bit eerie, given his jersey number is 22).

The Sedins and the Canucks had aimed to get a deal done before the regular season started, but talks stretched on for a month. The brothers' agent, J.P. Barry, was in Vancouver this past week to meet with Gillis. Last time, in summer of 2008, talks for a new contract extended to the brink of free agency.

Gillis said the length of the deal was not an issue – convinced the Sedins' fitness will carry them – but said dollars were a question, trying to figure out what the salary cap will be in future years and leaving enough room to keep the club strong with the players around the Sedins.

Keeping Henrik was especially crucial, given there are simply no top-flight centres available, long-time NHL assistant manager Frank Provenzano said, calling it the most important position on the ice. But even with Gillis saying contract term was not a question, Provenzano said length of contract is at the heart of such issues, given almost all players see declines as they approach their late 30s. There are exceptions, but they are rare, and Vancouver's gamble is the Sedins will be that exception.

"It's always a bet but it's a riskier bet," said Provenzano, a former assistant GM in Dallas and Washington. "They're on the part of the blackjack table where there are declines for every player." 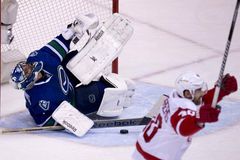 Canucks’ Luongo on the verge of exorcising first-month demons
October 29, 2013 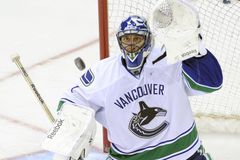