The season just got a lot more difficult for the Ottawa Senators.

The Senators will be without star defenceman Erik Karlsson for the rest of the year. The Norris Trophy winner underwent surgery Thursday to repair his left Achilles tendon, which was cut by a skate blade during a game Wednesday night against the Pittsburgh Penguins.

"It was a clean cut and recovery is expected to be 100 per cent," Murray said. "But it does mean his year finishes at this time."

Murray had the opportunity to speak to Karlsson, saying the player felt he "got directed and got cut with a skate that shouldn't be where it was."

Karlsson, 22, was injured while being checked by Pittsburgh's Matt Cooke. The Penguins player lifted his leg in what appeared to be an attempt to pin Karlsson against the boards but his skate blade struck the Senators' player right above his skate boot.

Karlsson immediately slumped to the ice and was in obvious pain as he attempted to get up.

The NHL's Department of Player safety reviewed the incident and felt no supplementary discipline was required.

Murray was very disappointed with that decision but said his biggest concern now is dealing with the loss of Karlsson to his hockey club.

"The league suggested it was a hockey play gone bad and I suggested that Matt Cooke has somewhat of a history and maybe that should be considered as well, but I don't believe that's the approach they took. They took it as the individual act."

Some NHL players do wear Kevlar socks for additional protection but Karlsson was not one of them. Marc Methot, Karlsson's defence partner, said the injury will make him try the socks.

"It's a tough call," he said. "Most of us have never even tried them on before.

"It certainly raises awareness now. I'm going to try them out."

Karlsson's injury couldn't have come at a worse time for the Senators (7-5), who've been decimated by injuries.

Ottawa is already forward without forward Jason Spezza (back surgery) and defenceman Jared Cowen (season-ending hip surgery). Peter Regin and Guillaume Latendresse are both sidelined with injuries but could be back early next week. The Senators also lost winger Milan Michalek, who twisted his knee during Wednesday night's warmup.

Murray was already working the phones looking for ways to strengthen his club prior to Karlsson's injury. He's doesn't anticipate opposing GMs will be any more charitable now that Ottawa is without its top defenceman.

Despite the sense of urgency, Murray doesn't want to give away any first-round draft picks or some of the organization's top prospects for a short-term fix.

Karlsson led the Senators in goals (six) and was second in points (10) through 14 games.

"We don't replace Erik Karlsson," said Murray. "We don't have anybody in that category of player.

"We hope other people eat his minutes and defensively we just won't allow any goals. I guess that's the only way you can do it. (Goalie) Craig Anderson has to be great and our defence has to be great and hopefully by committee find a way to score some goals."

The Senators are sixth in the Eastern Conference and Murray is confident the team can challenge for a playoff spot.

"I wouldn't be here if I didn't believe that," Murray said. "I believe we have to work hard and we hope we get some guys back in the near future that contribute and we have to make some callups."

Murray is concerned, though, how his team will deal with its latest setback.

"We'll recover from this without a doubt. We may not be as talented, but I think we've got a real good strong character group and we have to hope that they will help carry us through."

The Senators don't have the luxury of time to fret about Karlsson's injury. The club will play five games in a span of seven nights, starting Saturday night in Toronto against the Maple Leafs. 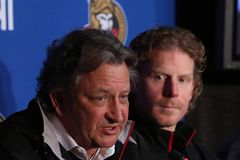 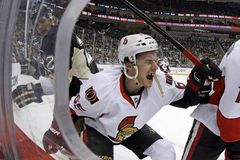