Someone they grew to hate was now suddenly clad in their black and red colours, an unlikely teammate following a blockbuster trade from Toronto.

"You didn't even know if it was real or not," Senators winger Mike Hoffman recalled. "But once it set in that yeah, okay, it's not a dream, he's actually on our team now, it didn't take long at all (for him to fit in)."

Ottawa has seemingly got what it was after in the trade for Phaneuf, which was made a year ago Thursday.

"This trade for us was a bit more than hockey-related," Senators general manager Pierre Dorion said in a recent interview. "Dion obviously has brought great leadership to our team, his influence on our younger players – how to be pros, how to approach games – has been a big factor, I think, in what we've done this year and what we're trying to accomplish moving forward."

Ottawa, currently hanging onto the second playoff spot in the Atlantic Division, likes the bite Phaneuf has given them and believe he's capably filled a veteran void near the top of their defence. They rave about a "tremendous" leadership effect which also won fans over time with the Leafs.

Not only that, Dorion says, but Phaneuf keeps the club from having to expose younger, less experienced defencemen to heavier minutes and responsibility. Phaneuf averages almost 23 minutes in all situations for head coach Guy Boucher, his most frequent five-on-five opponents up front this year including Alex Ovechkin, Nicklas Backstrom, Ryan O'Reilly and Auston Matthews.

"When you play a hard 20-25 minutes, finding those defencemen (who can do that), they don't grow on trees," Dorion said. "For us, for Dion to come in and do what he's done it's been very valuable."

Phaneuf's effectiveness, however, does not quite align with a contract that has four more years remaining with an annual cap hit of $7-million (U.S.) – tied with reigning Norris trophy winner Drew Doughty for sixth-highest among NHL defencemen this season.

Overall production for the Edmonton native, who turns 32 in April, is more in line statistically with a No. 5-calibre defenceman, according to the hockey analytics website Own The Puck.

Among the weaker puck possession teams in the league, the Senators are outshot even a little more with Phaneuf on the ice. The veteran defender has also taken 29 minor penalties, most at his position league-wide and nearly as many already as the 35 he took all of last season.

"At the end of the day I look at his contribution and what he's able to do five-on-five. (Penalty kill), he's been tremendous," Dorion said, citing the club's rise from the second-worst unit last year to 10th-best this season.

The club has allowed 110 shot attempts per 60 minutes when he's on the ice, worse than teammates Erik Karlsson (90), Marc Methot (99) and Cody Ceci (108) and among the highest marks league-wide.

Phaneuf has become an effective net-front presence on the Ottawa power play (11 points), on pace to match the 32 total points he recorded last year between Toronto and Ottawa. But he has only nine even-strength points (tied for 104th among the 175 defenders who've played at least 30 games) and only one primary assist in five-on-five situations.

Ottawa saved money in the short-term in dealing for Phaneuf – parting with contracts for Milan Michalek, Jared Cowen, and Colin Greening – and while his contract is indeed large, it's not quite as prohibitive for a team like the Senators, which never spends to the cap.

Phaneuf's impact, in the team's view, also goes well beyond the ice with players and their GM lauding his leadership ability – a benefit certainly for 26-year-old Karlsson, the team's captain.

Hoffman was among the many Senators who despised Phaneuf from all those Battle of Ontario clashes, but the outgoing, likeable person he's come to know since is "completely different."

"Probably the most different that I've ever met in that instance where you play against someone and you maybe think of them as a certain way and then you meet them in person and they're completely 180-degrees (the opposite)," Hoffman said, citing Phaneuf's character and leadership.

"I've become good friends with him."

Dorion was still second-in-command to then-general manager Bryan Murray when the trade was made last February and like his players, found Phaneuf to be an annoying oppositional presence, someone who dished out big hits and was always at the centre of post-whistle scrums.

"So when you have that element on your side it can help you in the long run also." 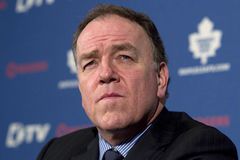 Senators acquire Tommy Wingels from Sharks for two AHL players, pick
January 24, 2017
Report an error
Due to technical reasons, we have temporarily removed commenting from our articles. We hope to have this fixed soon. Thank you for your patience. If you are looking to give feedback on our new site, please send it along to feedback@globeandmail.com. If you want to write a letter to the editor, please forward to letters@globeandmail.com.
Comments