Expectations are high for the Ottawa Senators this season, so head coach Paul MacLean can be excused for being a little nervous when he finally gets a chance to see his revamped regular-season roster in action.

The Senators will put the busy off-season and training camp behind them when they open their regular season on the road. They kick things off Friday against the Buffalo Sabres and then head to Toronto to take on the Maple Leafs on Saturday.

The Senators are expected to be a playoff team this season, with new acquisitions Bobby Ryan and Clarke MacArthur bolstering the forward lines and captain Jason Spezza and defenceman Erik Karlsson back from injury.

"(Friday) night's the first time we really get tested as a group so we're a little bit scared, little bit excited, more excited than scared," MacLean said. "We feel we're a capable team, but we have to come here and do our work every day and when we do that I think we'll like where we're going to be."

Spezza is well aware of the expectations, and as captain he takes accountability in making sure the team is prepared.

"There's lots of optimism and high expectations for us," said Spezza. "With that comes the responsibility of making sure we're ready to play every night so it's a good challenge for us and a good challenging way to start the season as well."

Spezza suffered a mild groin sprain in training camp and was restricted to just two preseason games, but says he feels good and is looking forward to getting the season underway and seeing how he, Ryan and Milan Michalek execute as a line.

"We expect to produce and how quickly we gel as a line is probably going to impact how we do in these first six games so we'd like to get off to a good start," Spezza said. "We'd like to get on the board early and get some wins, but for us we just need to learn through our games."

After missing most of last season due to a partially lacerated Achilles, Karlsson knows many will be watching to see if the 23-year-old can return to his Norris-Trophy winning form.

"I think everyone's really excited to finally get going again, especially the guys that missed a lot of time last year," Karlsson said. "I'm one of them and I've been looking forward to this all summer and (Friday) its finally time."

MacLean is looking forward to seeing how his team fares against two division rivals after a lengthy training camp.

"It gets us right into it which is what we want to do," MacLean said. "We don't want to be tiptoeing around or testing the water we want to get in there and get playing, get involved in the game right away and obviously Buffalo and Toronto being division games right off the bat a so for us it's going to get us into the start of the season and get us right into the (division) battle."

The Sabres opened the regular season Wednesday against the Detroit Red Wings with a 2-1 loss and know the Senators will offer another challenge.

"We've seen them a lot last year," said Sabres captain Steve Ott. "Obviously with having Spezza back full-time and Bobby Ryan now, it gives them another element. They're a really good hockey club. It's going to be a good test for us.

"Those are the top-echelon teams - Detroit and Ottawa - they're good measuring sticks for our club."

After spending the last few days practising while most of the league got under way, Craig Anderson is excited to get the start against the Sabres.

"We're ready to get going here," said Anderson. "(Friday) it starts for real. We've got to show up and the games start to count so there's a little bit of excitement in the room around getting the season started and making sure we get off on the right foot."

"It's a huge honour and it can't be understated how big of an honour it is to be a captain in this league," he said. "I'm excited about the challenges ahead for me of being the captain and playing a regular season game with the 'C' on will definitely be special."

When asked if he cheered on former Senators captain Daniel Alfredsson when Detroit played Buffalo on Wednesday, Spezza was quick to reply: "I love Alf, we're good friends, but they're in our division. I only cheer for the Senators."

Notes: MacLean said he would wait until Saturday before deciding whether or not Anderson will play back-to-back games. Anderson says he won't give much thought to facing-off against Ryan Miller, should he get the start, despite the fact both are being considered to represent the U.S. at the Olympic Winter Games.

Conacher, Pageau and DaCosta hope to build on strong camp with Senators
October 1, 2013 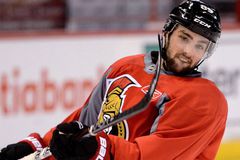 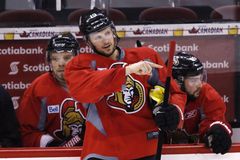 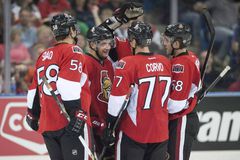 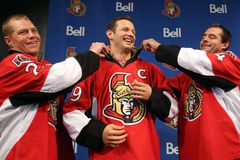 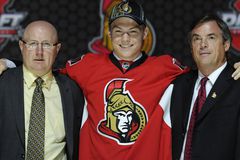