Joe Thornton knows he would look a lot younger if he shaved his bushy, grey-streaked beard.

But why should he worry about looking younger when he already plays and feels that way?

By far the oldest player among the NHL's leading scorers, the 36-year-old San Jose Sharks centre is getting better with age at a time when the league is trending younger. With nearly a point per game this season, he's on pace to become just the 13th player 35 and older to amass 80 points in a season since 1990.

"He's playing as well as I've ever seen him play, he really is," said Sharks general manager Doug Wilson.

"To me, he is a young 36-year-old and a lot of it is attitude and spirit," Wilson added. "This guy is a special, special guy."

Exuberant in his passion for the game, Thornton sees no end in sight to his Hall of Fame career. Could he play as long as the now-44-year-old Jaromir Jagr?

"Ohhh man, what a question," said a relaxed, yet energetic Thornton during a phone interview from San Jose. "It would be great if I could, but that's still eight years away. That's a long, long time. If I feel good I'd love to play that long, but right now it's hard to say if I could."

Playing until the age 40 seems more likely, said Thornton, who has one year remaining on his contract with the Sharks.

"I feel good. My body feels good. My mind feels good. I love going to the rink every day. I love the fellowship with the guys, the competition," Thornton said. "Realistically, I can definitely see playing till 40 at least, yeah."

Like Jagr, Thornton is that rare player to remain productive with age.

Only 25 players in the game today are older than Thornton and none, including Jagr, are putting up his numbers.

He entered play on Thursday night with 67 points in 70 games, including 51 assists, a mark bettered by only Chicago's Patrick Kane and Ottawa's Erik Karlsson this season.

No player has more points (1,326) or assists (952) than Thornton since he entered the league in 1997 and only superstars Alex Ovechkin and Sidney Crosby have more points since the start of the 2005-06 season.

Thornton keeps rising up the all-time scoring ranks, too. He is likely to sit among the top-30 in career points by the time this season ends and could rise even higher if he ends up playing until 40 or beyond.

Wilson was near certain that Thornton could play as long as Jagr for one simple reason.

"Because I have not seen a person that loves the game as much as him," Wilson said during an interview at the GM meetings in south Florida. "Everything about the game he loves."

The St. Thomas, Ont., native says his body indeed feels superb. His legs are strong and he hasn't been injured.

He finds it strange to suddenly be one of the older guys who knows exactly what the Sharks younger players are going through in handling the grind of an 82-game season.

"I know that I'm lucky to be playing this long," said Thornton, who will start his 19th season next fall. "It rarely happens (that) you play 17, 18 years. I love it. I love talking to the guys. It's a big brotherhood and I love coming to the rink.

"I just love everything about going to the rink and competing."

Thornton started the year quietly which led to inevitable questions of decline, but he's surged since mid-December, racking up 51 points in his last 40 games.

He's had at least a point in all but five games in that span.

Thornton credits teammate Joe Pavelski, who has more goals than anyone but Ovechkin since the start of the 2013-14 season, and 22-year-old winger Tomas Hertl for the surge.

The Sharks are also rolling, tied with the Ducks for the most points in the league since Jan. 8 and suddenly in contention for the Pacific Division title.

If not day-dreaming about winning his first Cup, it remains a goal for Thornton, who's come as close as the Western Conference final with San Jose.

"We know we have to go through some tough teams, but when we put out our A game I like it against anybody in the league," Thornton said.

He's not looking that far ahead though. Thornton is just enjoying the ride, feeling young while looking older. He has no plans to shave.

"When you get fresh shaved you look really, really young," he said. "So when it's all said and done I'll be 25 again."

A by the numbers look at Joe Thornton's career:

691 — Assists since 2005-06, the most of any player during that span and 50 assists more than the next closest player, Henrik Sedin.

51 — Assists this season, which trails only Chicago's Patrick Kane and Ottawa's Erik Karlsson.

18 — NHL seasons for Thornton, who has one more year remaining on his contract with the Sharks.

74 — Points needed to become only the 20th player in NHL history to accumulate at least 1,400 points.

In a time of transition, filling final spots on Canada’s roster won’t be easy
March 2, 2016 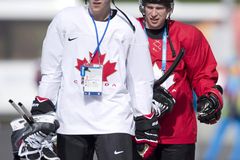 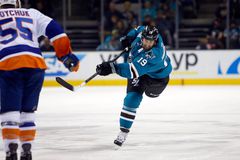