We welcome the Columbus Blue Jackets to the NHL season.

We also express grave doubts at their ability to remain a relevant party in it.

The John Tortorella-led Blue Jackets finally picked up their first win of the season on Saturday, slipping past the Colorado Avalanche 4-3 with two third-period goals. With that, Columbus improved to 1-8-0 – which is the equivalent to being in the bottom of a canyon and being handed a shovel to dig out.

Early season slides are deadly in the NHL. Seven teams failed to get 10 points by Halloween last year and only Winnipeg – which had nine – was able to make the playoffs.

What's hurt Columbus the most is it didn't lose close games. No overtime losses. No shootouts. A team such as the Ottawa Senators has had a relatively tough start, but it's been masked by the fact they've won one shootout and lost two others.

The Sens have eight points in eight games; the Blue jackets have two in nine.

With 16 teams in the Eastern Conference and more three-point games than ever, it takes a ton of points to make the playoffs. Last year, the wild-card teams in that conference had 98 and 99 points. Leaguewide, there were a record 12 teams with 100 points.

For Columbus to even contemplate the postseason, Tortorella's crew needs to go something like 46-26-1 the rest of the way and hope 95 points is enough.

It's so dire already that the pointy headed prognosticators at hockey-graphs.com are giving them only a 14-per-cent shot at making the playoffs, which is well behind the Toronto Maple Leafs, among others.

The Blue Jackets have had the most attention for their atrocious start primarily because they fired coach Todd Richards (after loss No. 7) and no team had gone 0-8-0 to open a season since the 1943-44 New York Rangers.

But Columbus has some company in the slow start department. Here are five other teams that are – somewhat unexpectedly – in trouble if they don't start winning soon:

Things are going pear-shaped quickly in Denver. Netminder Semyon Varlamov has not had a good start (.869 save percentage) and it's apparent they're going to miss Ryan O'Reilly immeasurably down the middle. Seven games into the season, the Avs are a 39-per-cent possession team and coach Patrick Roy is giving exasperated explanations for why the analytics don't apply to this group. This is a good example of why you don't want your head coach to also have a role in the front office; what do you do if he deserves to be on the hot seat?

In fairness to the Flames, they desperately miss defenceman T.J. Brodie, who should return from injury in the next week or so. Without him, Calgary has been outscored almost 2-to-1 and won only two of its first seven games. The combination of bad possession hockey (43 per cent) and brutal goaltending (.877 team save percentage) has been hard to watch. The worst part? Big off-season acquisition Dougie Hamilton hasn't fit in as well as they had hoped on the blueline.

This year was supposed to be different. This was the year the rebuilding efforts paid off with a push up the standings, with some even forecasting a playoff berth. After a rocky 2-6-0 start, that looks fanciful. An injury to goaltender Robin Lehner has hurt, as the Sabres didn't have a capable backup, but this remains a young team with a suspect blueline.

They won't be as bad as last season's 54 points, but improving by more than 25 in a single season is a tough ask for any franchise. Which means no playoffs.

Hello darkness, my old friend. The Oilers started the season 0-4, then won three games, then allowed seven goals in a crazy loss to Washington on Friday. The fact that star rookie Connor McDavid has come alive and had a point-a-game going into Sunday's meeting with the Kings is obviously a huge positive, but the Oilers blueline still looks like, well, the Oilers blueline. They'll need a big year from goalie Cam Talbot to get into the playoff race.

Life is complicated at the Duck pond. Coach Bruce Boudreau's chair is getting warm, only five months removed from taking this team to within one game of the Stanley Cup final. Corey Perry and Ryan Getzlaf inexplicably have zero goals and only two assists – combined. And the Ducks have scored a total of six goals in seven games. Of all these teams, Anaheim should have the best chance to crawl back into the race. But if they fire Boudreau and hire Randy Carlyle, as the rumour mill suggests, bets are off.

The Detroit Red Wings. Yes, they have nine points in eight games after narrowly beating Vancouver on Saturday. But they also own a glaring third-worst possession rating (45.8) in the league. Part of that is missing the presence of Pavel Datsyuk, but the Mike Babcock hangover has also been apparent early.

The NHL's bottom 10 (before Sunday's games) 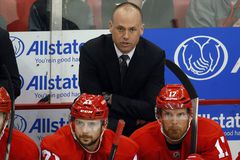 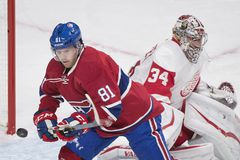 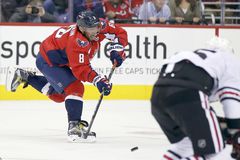 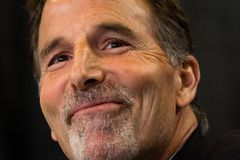