He wanted to talk about the game, getting back on the ice and benefiting charity with Wednesday's game between locked out players in Toronto.

But the questions facing Steven Stamkos on Monday were all on the painfully familiar off-ice topics the young Tampa Bay Lightning star has grown accustomed to the past few months.

"Steve, on the labour front, how do you feel about the NHLPA possibly filing a disclaimer of interest?" was one.

"What is your message to the owners?" was another.

"I know everyone probably wants to ask about that," Stamkos said quietly. "Right now my focus is on this event. For me, it's trying to stay informed and focusing on this."

The 2012-13 season was to be Stamkos's fifth in the league and a follow up to a third-straight 90-point season in which he led the league by a wide margin with 60 goals.

Still just 22 years old, he is one of a handful of this generation's superstars that is missing out on one of his peak seasons (not to mention $8-million in salary) and not playing any competitive hockey for the first time he can remember.

And he's not alone. Other than another charity event in Atlantic City last month, Wednesday's game featuring Stamkos and 38 other locked out NHLers will be their first taste of action against top end talent since the end of last season.

Instead, players have had to keep busy playing mainly with beer leaguers, including Stamkos joining his father, Chris, in his Thursday night games near his hometown of Markham, Ont.

The two time Rocket Richard Trophy winner admitted he has had to take it easy on the old-timers.

"There's a couple times when I've had to take a little mustard off the shot," Stamkos said, adding that former teammate Steve Downie and Leafs alum Dan Daoust play in their games.

"But it's great for my Dad and his buddies. A lot of them haven't had the chance to skate with NHL players before. It's fun for me to get out there and skate with those guys as well."

As for getting Stamkos and Co. back on NHL ice, that doesn't appear to be coming any time soon.

The players are in the midst of a vote that would give the NHLPA's board the authority to dissolve the union, a manoeuvre that would allow players to mount a counterattack in court after the league filed a class-action suit against players late last Friday.

That vote – which requires two-thirds of all NHLPA members saying yes to put it through – will conclude Friday, something that appears to have put the league and players in a holding pattern in terms of future talks.

A new collective agreement will likely have to be settled by mid-January to play a partial season, leaving roughly four weeks for some real progress to be made.

"I thought we'd be able to work something out [sooner]," said Stamkos, who has received plenty of offers to play in Europe but has decided to stay in the Toronto area and train with Gary Roberts in the hopes an abbreviated season will begin soon.

"The guys [like Roberts] that have been through this before, they told me it's a long process. There's so many ups and downs. For me obviously, it's my first one, so you just try and stay informed and learn from it."

So, for now, playing in charity and beer league games will have to do.

"It's frustrating," he said. "You do something your whole life, and you don't really think anything of it.

"You can play pickup games, you can play shinny games, on an outdoor rink, but it's just that nothing matches getting into an [NHL] game atmosphere."

Wednesday's game will be played at the former home of Maple Leaf Gardens and is expected to generate at least $50,000 in addition to what sponsors contribute to grassroots hockey.

The building is on the verge of selling out, which shouldn't be a surprise given it holds just 2,600 seats and a few hundred standing room. The event has also attracted major media attention, with most major networks and publications expected to attend.

Full rosters for the game: 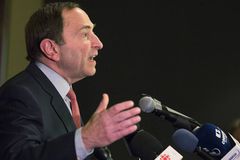