Stroumboulopoulos debuted as the host of Hockey Night in Canada on Saturday night, anchoring Sportsnet's new interpretation of the venerable TV franchise in spite of the apparent displeasure of long-time host Ron MacLean and partner Don Cherry.

The Gemini Award winner was one of the key additions made to the program when Rogers purchased its rights as part of a 12-year, $5.2-billion deal with the NHL that brought an end to 62 years of Hockey Night in Canada on the CBC.

Stroumboulopoulos was dynamic throughout the pre-game show, leading several discussions with analysts pulled from the CBC's former Hockey Night in Canada crew and Sportsnet's roster of hockey experts.

"Welcome to Hockey Central Saturday, my name is George Stroumboulopoulos. It's a blast to be with you," said the 42-year-old Mississauga, Ont., native as he introduced a panel with Hall of Famer Mark Messier, former player Nick Kypreos and seasoned journalists Elliotte Friedman and Damien Cox.

Stroumboulopoulos was energetic in all of his segments, referencing the popular adult cartoon show Archer, during the opening panel and playfully shoving Kypreos during a demonstration of proper defensive techniques.

Not everyone on Hockey Night in Canada was thrilled with the changes. MacLean is now only responsible for leading the discussion on Coach's Corner with Cherry and a segment that will focus on the hometowns of NHLers that will air live on Sundays.

At the start of Saturday's Coach's Corner segment Cherry asked how much time he had to get through his list of topics.

"I only got five minutes, eh? This is what you call phasing a guy out, you know what I mean?" said Cherry.

"At least you're still in the phasing part," replied MacLean.

They then discussed Cherry's prediction that the Toronto Maple Leafs would not draft any Canadian players, compared to the Stanley Cup champion Los Angeles Kings who selected seven Canadians in last summer's NHL draft.

The highlight of the pre-game show, however, was a pre-taped interview between Stroumboulopoulos and Prime Minister Stephen Harper. The pair sat on a couch at 24 Sussex, discussing Harper's hockey fandom, how well his kids play the game and the 21-year Stanley Cup drought affecting all seven of Canada's NHL teams.

"In this household we cheer for the Leafs in the East and the Flames in the West," said Harper with a miniature Stanley Cup visible on a side table over his shoulder. "But I just want to see a Canadian team win the Cup.

"Looking at the teams this year, my guess would be the Canadiens have the best shot but we've been surprised every year."

Stroumboulopoulos and Harper also toured the jersey room, a walk-in closet that houses all of the prime minister's hockey memorabilia. Harper took particular pride in showing off a Maple Leafs sweater signed by all the surviving members of the 1967 team that last won a Stanley Cup for Toronto.

The prime minister also discussed how he asked for details on Team Canada's Olympic roster before the lineup was officially announced by general manager Steve Yzerman.

"I have the advantage that in this position you can pretty well command your audience," said Harper. "So when they were putting together Team Canada for the Sochi Olympics I had the management of the team come here and explain how they were going to make their picks." 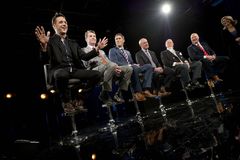