You know things are bad when your best player welcomes a trade to the New York Islanders.

"I enjoyed my time there, but I didn't want to be a part of that," forward Thomas Vanek told reporters Monday in New York after he joined the Islanders as the result of a trade with the Buffalo Sabres. "We traded pretty much every veteran. You train all summer long, practise every day and you want to be on a competitive team that has a chance. I was one of the leaders, but at the same time the reality is it's business and I'm happy to be an Islander."

So it goes for the Sabres and their fans, as one of the best scorers in the NHL would rather be part of the wacky world of Islanders owner Charles Wang than stay with the 2-10-1 Sabres. They went into Monday night's game against their former head coach, Lindy Ruff, and the Dallas Stars as the worst team in the NHL.

The Vanek trade, along with the employment of four teenagers on the roster, is part of the rebuild by Sabres general manager Darcy Regier. The problem is, the only person who seems to think Regier is the man to put the Sabres back together again is owner Terry Pegula. Well, I guess you could also include Pegula's adviser, Ken Sawyer, since he's been quoted as saying Reiger is "a hockey genius."

To be charitable, the opinions on that are mixed. Now that the bright new world Pegula promised with his billions of dollars when he bought the Sabres in February, 2011, is as warped as a funhouse mirror, there are those who blame Regier completely, others who blame the owner and the GM equally and others who say it's all on Pegula for pushing Regier into a spending spree in the summer of 2011 rather than let him proceed with his own plan.

During that spending binge, the Sabres overpaid for the likes of forward Ville Leino and defenceman Christian Ehrhoff. Regier's supporters say he wound up paying them too much because the top free agents wouldn't go to Buffalo so hehad to settle for the second tier and overpay to get them.

All right, but no matter which way you look at it, the Sabres are a disaster. There are lots of other signs Regier is not the man to put the Sabres back together. Defenceman Tyler Myers continues to regress after being the NHL's rookie of the year in 2009-10. There is also the presence of head coach Ron Rolston, who replaced Ruff when he was fired last season.

Under Rolston, who had little head-coaching experience of any kind – never mind any in the NHL – the Sabres look listless and disorganized. Yet Regier gave him a multiyear contract extension.

Once John Scott has his disciplinary hearing Thursday for a head shot on Loui Eriksson, the Sabres will have two players serving suspensions of 10 games or more for dangerous hits on skilled players. Granted, Patrick Kaleta is a long-term miscreant, but it's only since Rolston arrived that Scott, whose only use is as a fighter, started going after non-combatants like Eriksson and Phil Kessel. It's hard to believe that is a coincidence.

Regier did get a decent price for Vanek, who becomes an unrestricted free agent next July 1. Matt Moulson is also a good goal scorer, but he, too, is likely to bolt as a free agent come July. But the value in the trade was the first- and second-round picks in next year's entry draft.

The next veteran to go is goaltender Ryan Miller, who is no more happy than Vanek about playing for the Sabres. His value might be best realized just before the trade deadline if there are a lot of playoff-bubble teams.

Ruff, who spent more than 24 years as a player and coach for the Sabres, professed not to hold any grudges when he arrived in Buffalo with the Stars. He also showed he still has a great sense of humour when that prompted someone to ask if that means he still roots for the Sabres.

The coach did not mention Regier by name, but said: "I understand what is happening. Yeah there are a lot of changes. Some of the young guys are playing really good hockey. I think there's a really bright future there." 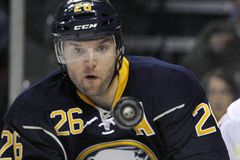 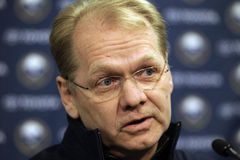 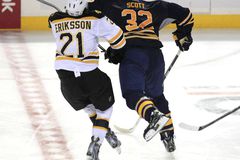