In a cruel twist of the NHL's divisional playoff format, say goodbye to one of the three best teams in the league in the first round.

The Blue Jackets, Washington Capitals and Pittsburgh Penguins could finish 1-2-3 in points, but because they all play in the Metropolitan Division, the second– and third-place teams will face off in the first round. It's not the first time a loaded division has caused consternation about this playoff format – ask teams in the Central Division – but the groans are getting louder now with no end in sight.

"It's stupid. It's the stupidest thing ever," Capitals forward Daniel Winnik said. "It doesn't work. It doesn't make sense."

The NHL adopted this format four years ago where the top three teams make it in each division and two wild cards from each conference, a throwback to 1981-82 to 1992-93 when the playoffs included four teams from each division needing to go through each other to advance. From 1993-94 through 2013, the Eastern and Western Conferences teams were ranked 1-8 and re-seeded each round to reward regular-season success.

The purpose of the change was to put more emphasis on intradivision rivalries, and it has – like the Capitals and Penguins meeting in the second round last spring. But that series and others also generate criticism and questions, including: Why should the Presidents' Trophy winners face the team with the second-most points in the East before the conference final?

"It's something that's so weird now with the playoff format, where you've got to play one of the best teams in the league in the first round," Penguins goaltender Marc-Andre Fleury said. "But if you're going to win in the end, you still need to play the best teams whether you face them in the first round or the third or fourth round. You've still got to beat them. There's no easy way to win the Cup."

Capitals winger T.J. Oshie feels the same way, but actually some paths to the Cup are easier than others. Consider that the Metropolitan fourth-place New York Rangers will likely have more points than every team in the Atlantic Division and have an easier road to the East final because they would avoid the Capitals, Penguins and Blue Jackets.

"It's not a good system when your one wild-card team can cross over and they have kind of, if they perform, a clear path to get to the final," Washington GM Brian MacLellan said. "I think the incentive should be the higher team gets the easier path."

While the Rangers could end up facing Atlantic Division foes with fewer points, the Capitals, Penguins and Blue Jackets will beat each other up on the other side of the bracket. Capitals coach Barry Trotz believes "that 2 (versus) 3 matchup could take a pretty big piece out of a team."

The Penguins took that path last year as the second seed in the Metropolitan and won the Stanley Cup. So Pittsburgh GM Jim Rutherford is fine with the format and isn't even worried about his team winning the division to evade a brutal first-round matchup.

Because of so much power at the top of the Metropolitan, Sidney Crosby said "You just expect everybody to win," adding that it has helped push the Penguins to keep their game up down the stretch.

That should help the Capitals, too, after they were able to cruise a year ago and didn't have momentum in the playoffs. Newcomer Kevin Shattenkirk learned from his years in St. Louis how important momentum is – far more important than winning in the regular season.

"It's tough because if you have had the best season of any team in the regular season, you feel like you should get some sort of relief going into the playoffs," said Shattenkirk, whose Blues finished first or second five times and never reached the Cup Final.

Capitals veteran defenceman Brooks Orpik sees no use complaining because this is the format at least through 2018-19. Detroit Red Wings GM Ken Holland said there hasn't been talk of altering the format and said, "You can't constantly change the system based on the balance of power at any given time."

Columbus, in the playoffs for just the third time in franchise history, will take it no matter the format.

"I don't think we are in a position to start picking and choosing right now," Kekalainen said. "We're making the playoffs this year and we're happy for that opportunity. But we'll let the teams that have been making it 10 years in a row complain about it."

Flames goaltender Brian Elliott won 11 games in a row going into their game Tuesday in Washington with a 1.70 goals-against average and .940 save percentage in that span. He's a big reason Calgary will be back in the playoffs.

Game of the week 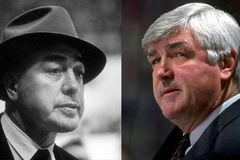 How this year’s NHL stories are shaping up, halfway through the regular season
January 6, 2017 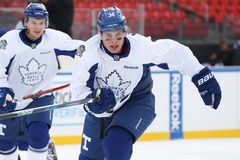 Ovechkin shines as Capitals beat surging Flames
March 21, 2017
Report an error
Due to technical reasons, we have temporarily removed commenting from our articles. We hope to have this fixed soon. Thank you for your patience. If you are looking to give feedback on our new site, please send it along to feedback@globeandmail.com. If you want to write a letter to the editor, please forward to letters@globeandmail.com.
Comments