Teemu Selanne knew he wanted to do something special to acknowledge the outpouring of affection he'd received all day in Winnipeg.

Hours before the Anaheim Ducks played the Winnipeg Jets at the MTS Centre on Saturday, Selanne decided that at the end of the game he'd throw a couple of sticks into the stands and make a point of circling the rink to say thank you to the fans.

It was the only gesture he could think of to cap off an emotional day that started at 3 a.m. with fans gathering at a downtown Winnipeg hotel to greet Selanne and the Ducks as they arrived from Chicago where they had played the night before.

From then on the tributes kept pouring in – during a morning news conference so crowded with onlookers it required a police presence, during warm-up before the game when his picture on the scoreboard elicited a standing ovation and during the game itself when he got cheered every time he touched the puck while each of his teammates got booed. And even after the game as he made his way to the team bus amid cheers, applause and a steady stream of handshaking, camera flashing and backslapping.

"It was unbelievable," Selanne said after the game, trying to contain his emotions. "I didn't really know what to expect. It was something I could never imagine, it was so special."

He hasn't played in Winnipeg since 1996, when the old Jets traded him to Anaheim just before heading to Phoenix. But the city still considers him a hero and fans still recount with reverence his rookie year with the Jets in 1992 when he scored 76 goals and piled up 132 points, both NHL records.

Selanne said he made a point of bringing his four young boys to Winnipeg just so they could see what real hockey fans are like. "My boys, they are growing up in California where hockey is not as big as here so that's why this was very special for them to come here and realize the passion that these people have here. They are going to remember this for sure the rest of their lives," he said.

He also wanted them to learn something else, too. "I've tried to teach them when you treat people well they are going to treat you well also."

Selanne said it was hard to focus on the game at first, with emotions running so high. It showed as the Ducks quickly fell behind 2-0 on goals by Kyle Wellwood and Blake Wheeler.

Anaheim coach Bruce Boudreau called a timeout to try to regroup his troops, but even he knew that wouldn't be easy with fans cheering Selanne and jeering every other Duck constantly. "I said, 'You guys are focusing on everything but the game and that's why we are down 2-0,' " Boudreau said after the game.

The Ducks managed something of a comeback, scoring twice to tie the game before the first period ended. Selanne got an assist on one goal after he flipped the puck over the head of Jet defenceman Zach Bogosian and on to the stick of Niklas Hagman, who shot it past Winnipeg goalie Chris Mason.

But the Ducks' comeback never got much further. The Jets took the lead again just 31 seconds in the second period on a goal by Alexander Burmistrov. They added another one shortly afterward when Andrew Ladd redirected a shot by defenceman Dustin Byfuglien. And finally Bogosian fired a long slap shot that beat Duck goalie Dan Ellis to end whatever hopes Anaheim had.

There was one brief flurry for the Ducks and one last memory of Selanne for the fans. Duck forward Corey Perry scored the final goal of the game on a power play in the third period to make it 5-3 Jets. One assist went to Selanne. The fans stood and cheered.

It wasn't the end Selanne wanted to the game, at this stage in his career winning is far more important that piling up individual points.

Boudreau did his best after the game to play the part of the grouchy coach, complaining about goaltender interference on Ladd's goal, criticizing his own goalie for poor play and generally bemoaning his team's lost opportunities that have left the Ducks mired in the bottom of the standing.

But even he couldn't keep up the act when talking about Selanne. He couldn't criticize his star forward for spending so much of day caught up in tributes. "I didn't want to sit there and say 'Okay you can't enjoy this' because he deserved to get all the accolades that he got."

Many of the Jets felt the same.

"To be honest with you, it was hard to hear at the beginning of the game. [I was]trying to communicate with [my defencemen] but it was kind of pointless, because I could barely hear myself," Mason said. "It was pretty cool, though. You can just see what he means to the city and how high he holds Winnipeg."

Added Ladd: "He's done some special things in this league, the 76 goals he scored here. He's had an amazing career, so it's nice for him to be able to get acknowledged by the fans, and hopefully he enjoyed it. We've been a part of a lot of great games and historic games this year."

When the game ended Selanne threw the sticks into the crowd and took several turns of the ice as the crowd stood and cheered. A couple of hours later as he was about to head to the team bus, Selanne was asked if he had one last word for Winnipeggers.

"Just, 'Thank you,' " he said. "It has been so special. Tonight really makes my whole career pretty much. That was something that I am always going to remember. There's always a big piece of Winnipeg people in my heart." 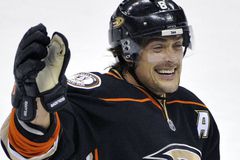 Selanne cheered in return to Winnipeg
May 8, 2018 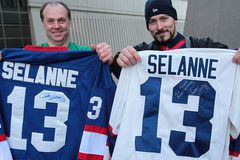 Teemu Selanne's much anticipated return to the 'Peg
May 8, 2018 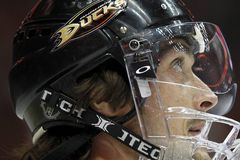