Willie Desjardins, the rookie Vancouver Canucks coach, is not an orator.

He does not relish the daily grind of questions from reporters. His answers are generally more vague than specific. And he speaks in a down-home way that reflects his small-town Saskatchewan roots. There isn't much nuance. There are two principal categories of performance: good, and real good.

Last Thursday, when his team was smothered 4-0 by the Los Angeles Kings, it was neither good nor real good. With the Canucks in a precarious playoff position, the showing on Thursday will not propel Vancouver into the postseason. Desjardins is not prone to longer answers, but when asked whether the poor performance, which included long stretches of absolutely nothing, was worrisome, he delivered what amounted, for him, a cri de coeur.

"It's always worrisome when you don't win," he began. He credited L.A. and said Vancouver is improving, and getting healthier after some injuries. The team had overcome a lot this season, he continued. The team has character. And then the frank conclusion.

"The only way we get in is if we battle hard every night."

Well, who better to regain one's confidence against than the Toronto Maple Leafs, the laughingstock of the league, a team that lurches from pillar to post, daily?

Saturday was prime time for the Canucks to revive themselves. The Leafs had not won a game in Vancouver in a dozen years and in the five previous had been outscored 21-6. Toronto was playing its third game in four nights and had been humiliated in Calgary the evening before, at one point ceding two shorthanded goals on a five-minute power play.

And the Leafs obliged the Canucks, failing to put a single puck in the direction of the Vancouver net during a 6 1/2-minute stretch of the first period.

From the puck drop, Vancouver brought requisite energy, even if it looked like beer-league hockey in the early going, and eventually cracked through with a goal late in the first, on the way to a 4-1 win.

"We weren't really happy with the L.A. game," Canucks goaltender Eddie Lack said afterward. "We showed we wanted this one."

It didn't feel resounding, however. It didn't feel as if it was 4-1. The Leafs held on and pestered the Canucks in the third, with Vancouver players afterward noting their push eased up too much in the final frame.

A win is a win, and it came on a night when division rivals Calgary and L.A. lost, so it bolstered Vancouver's standing, one point up on the Flames and three on the Kings. The Canucks have won three of their past four, but they've all been at least somewhat shaky wins.

Against Toronto, Vancouver displayed various flaws. There were too many cheap little penalties – though Toronto could not convert a single one. In the faceoff circle, a bane for Vancouver this year, it was bad, the Canucks winning fewer than one in three draws. And the Canucks' power play remains abysmal in 2015. On three power plays, the Canucks registered just two shots on goal.

The Leafs are long gone. The team will get a top draft pick and as of Sunday morning had an 8.5-per-cent shot at Connor McDavid. Carolina also lost Saturday night, staying ahead – behind – in the lottery race. The bottom triumvirate of Buffalo, Edmonton and Arizona appears fixed in the cellar, having together lost 26 of their past 30 games.

The Leafs on Saturday were, as usual, not good, but not always entirely awful. On a power play in the early second period, Phil Kessel was strong and the Leafs pressed. Kessel played the entire two minutes and when a shot of his was blocked as the penalty expired, he was out of gas on the backcheck and Vancouver scored its second goal – a picture of the season in a snapshot.

The return of the chastened Nazem Kadri, rested for three games by Leafs brass to send him a message, helped somewhat.

His line went up against the Sedins and, while outshot, held Vancouver's line off the scoresheet. "It felt like we still did a lot of positive things," Kadri said after the loss.

The Canucks side, while not inspiring, isn't a Leafs-like mess. The trajectory to the playoffs remains solid, even if it feels uncertain. The team, also, remains without starting goaltender Ryan Miller. Lack, who didn't see much action this year, has done an admiral job backstopping.

The team, too, gets healthier, with Chris Higgins, Brad Richardson and Kevin Bieksa all back Saturday after varying absences. Higgins and Richardson connected for the first goal. At the trade deadline, when Vancouver made only two minor moves, general manager Jim Benning had spoken about soon-to-return players as effectively the same sort of boost a trade could deliver. It proved true, Saturday at least. 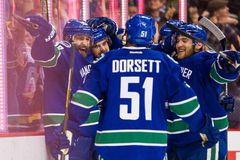 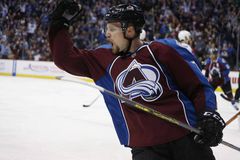 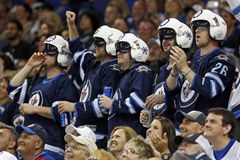 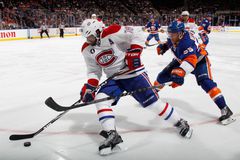