"'The Big Irishman' is a guy that loves the game so much that when he walks in, you know hockey's in the room." –Former goaltender, longtime broadcaster and Columbus Blue Jackets president John Davidson.

"Some people would measure their lives in the sports business by the trophies and the awards and the things they've won. But I think the real men can be measured by the impact they had on peoples' lives and Pat Quinn had a tremendous impact on a lot of peoples' lives in terms of them being good players or good executives but even better people. Pat was one of the most phenomenal human beings I've ever known. A lot of us feel really, really lucky that we got to work for him."

"What I always remember most about him is when it was time to talk to him about something, or he wanted to talk to me about something, walking into his office through the haze of cigar smoke, there was this huge, square-jawed, cigar-chomping Irishman who had a real presence about him and is intimidating at times." – Former Washington Capitals GM George McPhee, who worked under Quinn in Vancouver. McPhee's son's middle name is Quinn as a tribute to him.

"He's a real guy's guy. He's a man's man. He's just a straight shooter and called it like it is." – Florida Panthers GM Dale Tallon

"It wasn't like we were an ultra-talented team or anything like that. We weren't the Edmonton Oilers or the Montreal Canadiens. We had some good players and some journeyman players and he made us into a really good team that the style of game we played was ahead of the other teams in the league at that time." – Hall of Famer Bob Clarke, senior vice-president with the Philadelphia Flyers, who was on the team Quinn led to Stanley Cup finals in the 1979-80 season, Quinn's first full season behind the bench.

"As a coach (he) had a presence in the dressing room that demanded respect and had a way of talking and getting the guys ready for each game that really got the best out of the teams that he coached."

"He called me and said, 'Mats, it's Pat Quinn, you're going to be elected into the Hockey Hall of Fame. I think we were both crying at the time a little bit on the phone. We had some special moments together, and there was a lot of mutual respect." – former Toronto Maple Leafs captain Mats Sundin. The Leafs made the playoffs in Quinn's first five seasons, which included a stint as president and GM.

"This is a tremendous loss for the hockey community. Pat will be revered not only for his great accomplishments in sport but also for his courage and strength in face of his illness, and his dedication to family." – Toronto Maple Leafs president Brendan Shanahan.

"He demanded and commanded respect. Even the Olympic team, the World Cup team, he walked in that room and the superstars of the game were eyes wide open and wanting to be a sponge because this guy has so much hockey knowledge." – Maple Leafs director of hockey and scouting administration Reid Mitchell, who worked under Quinn in Vancouver, Toronto and at international competitions.

"He was my first NHL coach and he made quite an impression on me as I was breaking into the league and learning the game. He also is the person who called me when I got the news I was being inducted into the Hockey Hall of Fame. Needless to say that will always be a special moment I will cherish, and receiving that news was an even greater honour coming from Pat." – Los Angeles Kings executive and former Kings player Luc Robitaille

"I will alway remember he had my back even when I was a complete ass." – Former Toronto Maple Leafs foward Darcy Tucker (on twitter)

"Pat Quinn was a giant of a man in every way. A true leader and a wonderful person. One of my favourite Pat Quinn moments was him in tears on our bench after winning gold in Salt Lake 2002. He said women inspired the men." – Canadian National team member and five-time Olympic medalist Hayley Wickenheiser (on twitter)

"Whether he was playing for a team, coaching a team or building one, Pat Quinn was thoughtful, passionate and committed to success. Pat's contributions to hockey, at every level, reflected the skills he possessed and the great respect with which he treated the sport." – NHL commissioner Gary Bettman

"He was tough, smart, kind and Irish. The hockey world will miss him deeply." – Calgary Flames president of hockey operations, Brian Burke

"He was a larger than life coaching giant in hockey and an outstanding leader in Canada's Olympic Movement. His contributions as a player, coach and builder will never be forgotten and through his work he leaves behind a legacy that has inspired future generations of hockey players. Today, we mourn the loss of a remarkable Canadian and he will always be remembered in the hearts of fans across our great country." – Marcel Aubut, president of the Canadian Olympic Committee

"Pat is one of hockey's most respected individuals whose lifetime involvement as a player, coach and executive has made an indelible mark on the game." – Jim Gregory, Vice-Chairman of the Hockey Hall of Fame

"Pat Quinn was a giant of the hockey world, on the ice and off. Laureen and I extend our condolences to his family." – Prime Minister Stephen Harper

"British Columbians knew him best as one of the finest players, coaches and leaders the NHL has ever produced. Not only was he was an original Canuck, but he went on to lead the Canucks to within a game of the Stanley Cup in 1994, and will forever be remembered for coaching Team Canada to its first Olympic gold medal in 50 years. Pat was a big man with a bigger heart whose legacy will live on for generations, in the hockey world and beyond. His approach to his illness was the same as his approach to hockey: a challenge he met head on." – B.C. Premier Christy Clark

"We have lost a great man. It's a sad day for hockey and for everyone who loves our game. I wouldn't be the person I am today if it weren't for Pat. He was a great leader and always a teacher. He taught me how to be a professional on and off the ice. He taught me how to play hockey the right way, how to win, and about the importance of respect and loyalty. Pat's impact on our city has been immeasurable. He was responsible for bringing hockey to the forefront in Vancouver. He brought the pride back to the Canucks and today his finger prints and impact are still felt within this organization." – Trevor Linden, President, Hockey Operations, Canucks Sports & Entertainment 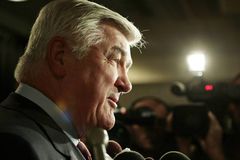 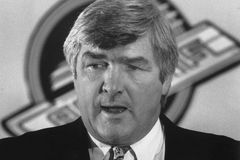 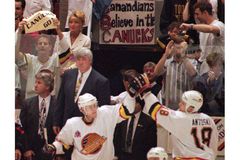 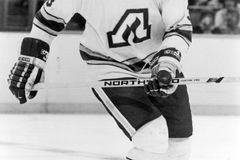 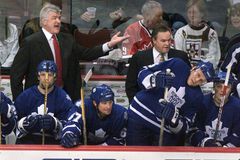 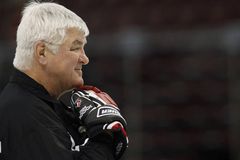