Sidney Crosby's new look is about to get a closeup.

When the Pittsburgh Penguins captain skates onto the ice to open the Eastern Conference final series against the Boston Bruins Saturday night, fans will see something they haven't in two months: Mr. Crosby's unprotected face.

Gone will be the full facial protection he has worn all postseason to shield his broken jaw, an injury suffered two months ago when a teammate's slap shot hit him right on the teeth.

"They're comfortable with it coming off, being hit and things like that," Mr. Crosby said of the team's doctors.

"That's what it came down to. … It's nice to see a little bit better."

"I kind of liked seeing the pictures of him with it," said his coach, Dan Bylsma.

"Playoff type pictures. This does show off his beard a little more."

Watch the video of the original incident here

What Saturday's big reveal won't highlight, however, is the weeks of intense medical and dental work it took to rebuild hockey's most famous face and get the Penguins superstar back in time for the playoffs.

And it's far from done.

In a scene that was replayed over and over in the immediate aftermath, Penguins defenceman Brooks Orpik's shot from the point deflected off another skater and hit an unaware Mr. Crosby flush in the face back on March 30. He crashed to the ice, spilling teeth and blood.

Roughly 10 of his teeth were affected, some irreparably, as the force from the puck would have pushed them through some of the supporting bone structure and severed the neurovascular pulp supply, which is a tooth's connection to the nerves and blood supply in the mouth. Two teeth even went back so forcefully they damaged the inside of his mouth around his tongue.

The impact broke his jaw, which forced surgeons to cut an opening inside his mouth and use screws to fasten two small titanium plates to the bone to help it heal.

It's an injury many NHL players consider the worst they have had.

"I can honestly say that was the most traumatic injury that I've gone through," said Ottawa Senators defenceman Marc Methot, who suffered a more serious break late last season when a puck hit him next to his ear. "You can't socialize with anybody. You can't eat anything. You're really segregated from the team, and you can't go out in public. It's not fun."

Beyond the pain, one of the biggest problems for players initially is weight loss, as they are put on a liquid diet for weeks and forced to live on soups and shakes while the bone heals. Mr. Crosby was lucky in that his break didn't require that his jaw be wired shut, but he still lost close to 10 pounds. Many others, like Mr. Methot – who lost 20 pounds in less than three weeks – aren't as fortunate and have their teeth immobilized for up to six weeks by a series of wires and braces.

Either way, the diet is difficult, even for a fitness and nutrition guru like Mr. Crosby, who doesn't have a personal chef and prepares most of his own meals. "It's pretty much impossible to keep weight on," he said.

Broken jaws are not uncommon in the NHL. Team dentists see them as often as once a season, and they can vary from hairline cracks to serious, multiple breaks. Mr. Crosby's injury was considered moderate, but the damage done to so many teeth and the inside of his mouth was extensive enough that he wasn't able to work out or eat properly for the first few weeks of his recovery.

Doctors also have to treat hockey players differently as they have a higher risk of rebreaking their jaw due to the sticks, elbows, shoulders and pucks that can strike them in the face as soon as they're cleared to return to the ice. That's why Mr. Crosby had been wearing jaw protection on his helmet so far in these playoffs, a piece of equipment he will finally remove for the third round after doctors were satisfied with how the bone had healed.

"We tend to over-engineer these things for the hockey players," Washington Capitals team dentist Thomas Lenz said of repairing an NHL player's jaw. "We put plates in for players that we might not if it was you or I because it's going to allow them to get on the ice sooner and you know you're going to have some stability there."

A veteran of the job, Dr. Lenz has dealt with some of the most gruesome injuries in hockey the last decade, including when former Capitals captain Chris Clark had his upper jaw shattered by a puck and required a cadaver bone to replace the "pulverized" area. Seven years on and now retired, Mr. Clark still undergoes dental work related to the injury.

"He had a lot of bone grafting done," Dr. Lenz explained. "He's still not all the way finished."

Mr. Crosby, meanwhile, has chosen to play without getting much of the work done to restore his lower front teeth, which is why many are still missing or broken and his speech is impaired. He will eventually have dental implants inserted, something that will likely happen in the off-season when his jawbone is fully healed.

Throughout his recovery, the Penguins have declined to make Mr. Crosby's doctors available to the media, but those close to the star say the medical staff involved were impressed with how he dealt with the injury and recovery. Some of that, unfortunately, comes from having so much experience with doctors.

Mr. Crosby has missed much of the last two seasons with concussion problems and as a result has become a bit of a medical expert. Despite the discomfort involved, he found that the five-week recovery plan from the broken jaw was much easier than dealing with his head injuries. He could see progress every day.

"He's gone through so much with the concussions," said Pat Brisson, Mr. Crosby's agent. "There's been times during the 18 months that he missed that he was doubting whether he was going to play again. He wasn't sure. Through adversity like that, you become stronger and stronger.

"The concussion had so much uncertainty. You don't have an answer when you have a concussion. When you have a broken jaw, it's black and white. You see the X-rays. They're precise. It was taken care of in 24 to 48 hours. But the concussion, he had to go weeks and months with uncertainty. We didn't know where we're going. He's become much stronger. Not that he wasn't strong before, but he's on another level. And this injury, although it's a major injury, he went through it extremely well."

Mr. Crosby's quick recovery and incredible performance so far in the playoffs – with 15 points in 10 games putting him fourth in NHL scoring – has also won him more respect from around the league, especially from those who have been down the same road. They know it's not as easy as he has made it look.

"The best part of the entire process was being on a morphine drip and just lying there in the hospital," Mr. Methot said. "That was the only thing keeping me sane." 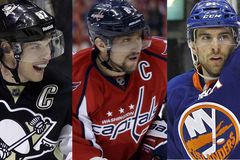 Crosby, Harding and McQuaid nominated for Masterton Trophy
May 14, 2013 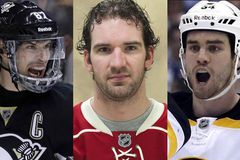