Twenty years ago, the Canadian Academy of Sports Medicine released a position paper on the topic of violence in hockey. Although it called for a variety of rule changes and amendments, it was at its heart a work of philosophy. It asked hockey to reconsider its rationale – that is, in part, to hurt people.

The paper caught no traction. Despite the authority of the body making the request, as well as its "Our Game" national bonafides, no one who mattered wrote about it or discussed it.

The organization, now known as the Canadian Academy of Sport and Exercise Medicine, released another report in 2007, asking for many of the same things, including this passage: "Fighting should not be part of the game of hockey."

The wording was clever. The CASEM was not asking for a ban on fighting, since fighting was already banned by rule. It understood that the people in charge could not excise that part of the game by fiat. Only the players could do that, and it required something more than a threat. It necessitated a change of heart.

Again, the report was largely ignored.

And yet, 10 years on, the mind worm that authorities such as the CASEM implanted in the NHL two decades ago has taken control.

There is still fighting in hockey (as well as in baseball and basketball). But fighting is no longer a centrepiece of the sport. Unlike 20 years ago, you don't go to a game fully expecting to see at least one bout as part of your entertainment transaction.

Instead, it's an aberrant act that still occasionally happens, like running the goalie. Fighting isn't just being reduced in hockey. It's dying off, from the top down, and headed inexorably toward irrelevance. The NHL, as a collective, did that. In so doing, it has in all likelihood saved the sport itself from the same fate.

The NHL gets an awful lot of well-deserved stick for not having its sporting house in order. Whenever we hear about what they're cooking up down on the The Avenue of the Americas, it's usually some goofy idea about expanding into another desert town, or getting itself wound up in a civic bun-fight over stadium subsidies. Like most professional sports leagues, it has cynically embraced its role as the villain in the piece – the out-of-touch graspers looking to squeeze another buck out of their customers using a lot of bumf about the Grand Tradition as cover.

But give it this much credit – the NHL has over the past four or five years quietly staved off the greatest existential threat in the game's history.

Ten years ago, when the CASEM was yelling into a stiff wind, more than one in three games featured a fistfight. That's around 600 fights over a season.

(These statistics are courtesy of Hockeyfights.com. Although the NHL certainly keeps these numbers, it's smart enough not to advertise them.)

Then the fighters began to die. That was not good for business. The criticisms didn't change, as such. Rather, they began emanating from within the game, and so people began to listen.

It is as true in hockey as it is in life – you're more likely to listen to a friend than your doctor. This is why so many of us swear you can kill a cold with liquor.

The NHL harnessed the external revulsion and internal doubt to tweak the rules. More important, teams rushed in to embrace a tactical opportunity. As a group, they rid themselves of the one or two guys on every roster who were only there to lay out instructive beatings and replaced them with smaller, faster men. That adjustment rippled through the pipeline feeding into the NHL. If the pros weren't interested in galumphing enforcers, why would anyone else try to cultivate them? We may already be in the midst of the first generation of young NHL players who have never had a gloves-off fistfight in their hockey-playing lives.

The media covering the game made a sea-change in the tone of their reports. Where fighters were once celebrated above goal scorers, they now went unmentioned. When they did get some coverage, it was of the "Here's another postcareer life ruined" variety.

Picking up on those cues, fans stopped celebrating the fights. At least out in public, where other people could hear them doing it. Hooting at two men pounding each other senseless no longer seemed cool. It's not a coincidence that as violence loses its allure in mainstream sports, mixed-martial arts gained popularity and boxing has enjoyed a small renaissance. That's the appetite for bloodsport finding its release valve.

This is the virtuous circle that made fighting in hockey non-viable – players to managers to media to fans, and then back to players. Since they get no positive reinforcement for beating people up, the players stopped doing it so often.

Each time the circle is run round, the effect amplifies.

This season, a fight has occurred in fewer than one in five NHL games. The overall reduction in fisticuffs is running at more than 50 per cent compared with a decade ago. The ones that do happen are impulsive decisions. The scripted fight between obvious contenders is over.

In a game this hidebound by tradition, that is more than revolutionary. It's as though they're playing a different sport.

About five years ago, the NHL and the NFL found themselves in the same spot. The main strength of their appeal – violence – was suddenly recast as a weakness.

Having little choice in the matter – since football is at its essence a game in which very large people are meant to hit each other over and over again – the NFL did nothing. That league continues to be besieged by questions, not just of its method of operation, but reason for existing. Those won't go away. When, not if, football withers, it will be from the bottom up, as parents decide they do not want to risk their children in a gladiator ring. They can play soccer instead.

Hockey had a choice, and to its collective credit it has exploited the easy fixes, such as fighting.

Hockey will always be a violent game. That's inevitable when you put armoured people in a contained area on skates. But more and more, it is eliminating the needless violence that put the game's future at NFL-style risk. Maple Leafs' Auston Matthews lets slip that he may have a concussion
December 22, 2017 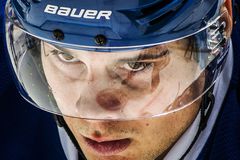 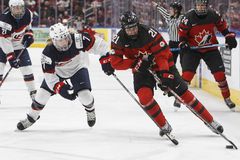