She met him in a country saloon called Roundup near Fort Lauderdale, Fla., where she worked part time as a bartender to supplement her income as an elementary-school teacher.

He was an NHL goaltender for the Florida Panthers, who used to frequent the bar with some of his teammates. Bottled water was his preferred beverage and line dancing was not exactly his favourite form of self-expression.

"He has two left feet," she said. "Tough to line dance when you're sober," countered the athlete.

The two fell in love and a couple of years later they were married and soon became the proud parents of two boys, Jake and Levi.

Times were good for Nicholle and Craig Anderson.

Nicholle remained busy, raising their young family in Coral Springs, about 25 kilometres northwest of Fort Lauderdale, as Craig continued his NHL career, by this time tending goal in Ottawa for the Senators.

But life was about to deliver a vicious body check to the idyllic setting when what Nicholle initially thought was a simple sinus infection turned out to be a rare form of cancer that affects the nose and throat. In October, 2016, she was told she had nasopharyngeal carcinoma.

Following several months of debilitating chemotherapy and radiation treatments, Nicholle Anderson was declared cancer-free in May, a happy ending to an otherwise harrowing experience that has drastically altered her outlook on life.

"I feel like we all think we're invincible," Anderson said during a recent interview. "We've all been there. But when you get that cancer card it's a whole new meaning of life.

"I thought I was really living before. I would go to Disney World, I was going here, I was going there and I was enjoying life.

"But now, I enjoy it in a whole new way. Certain little things. I look at my kids and the little things that they do and I just smile. I thought it was cute before, but now I just hold those memories dear to me even more."

"If you have a desire to go do something then go do it," Craig Anderson suggested, when contacted by telephone. "Don't wait. We've kind of taken that approach to everything. Things that would have bothered me five years ago don't bother me any more.

"A lot of it has to do what we went through."

Nicholle Anderson breezes into the restaurant in downtown Toronto with the confident stride of a busy executive on the way to an important meeting. Her long, blonde hair hangs loosely over her shoulders and a big pair of dark-rimmed glasses dominates her face. She has an ultrabright smile.

She is petite in build and scoffed that it is nothing, that she lost 35 pounds when her weight plummeted to 92 pounds as she was going through her cancer treatment and was sick as a dog. She is over 100 pounds now, she said proudly, but admits she still battles fatigue.

While she is willing to discuss the intimate details of her illness and how it affected her family, Nicholle will not give her age. She appears to be in her mid-30s. Craig, now in his 16th NHL season, is 36.

She sits down and orders a piece of cherry cheesecake – a bit of energy to help get her through a busy day of media responsibilities while in Toronto.

After word of her illness – and subsequent recovery – spread, the NHL asked Nicholle Anderson to be its first ambassador for the league's annual Hockey Fights Cancer campaign. The program is a joint initiative of the NHLPA and the league, which helps raise money, for organizations such as the Canadian Cancer Society and American Cancer Society, and awareness of the disease. Just as important, it helps the hockey community show support for cancer patients and their families.

On Nov. 4, as part of the Senators' Hockey Fights Cancer campaign, Anderson helped drop the puck at a ceremony at the Canadian Tire Centre before Ottawa's game against Las Vegas.

As a way to share her story, she has visited lodges in both Montreal and New York, accommodations established by Canadian and U.S. cancer organizations to help make life a easier for patients undergoing treatment.

She has also wrote a weekly blog, published on NHL.com in November touching on her experience.

In one of the blogs, she wrote how a person's state of mind should be a main concern while going through treatment and how, for her, music played a crucial role. Her cancer treatment greatest hits list included Don't Stop Believing by Journey, Beautiful Day by U2 and Here Comes The Sun by the Beatles.

On this day in Toronto, Anderson did an interview on The Social, a daytime talk show on CTV. She also appeared that same day on Global TV's The Morning Show, CP24, CTV News, Sportsnet and TSN Radio.

"I'm fortunate to have the NHL even share my story and reach out to people," she said. "And I'm sure, even if Craig wasn't in the NHL, I'd probably be volunteering here regardless. I would have found things to give back, it's just my personality.

"I'm just blessed to be in the position I am."

Craig was "her rock"

Back when she was bartending at Roundup, Nicholle had a negative attitude about pro athletes.

"I was just like, 'They're probably all cheaters, they probably all drink,' you know what I mean?" she said. "You have this stereotype of all of them.

When she got sick, Nicholle said Craig was like "her rock," even though he was away from home playing hockey. She said she doesn't know how she could have got through it all without him.

Her issues first surfaced in late September of last year when she had a miscarriage with their third child. She had been feeling ill and was experiencing trouble hearing out of one ear and was also extremely congested.

After the miscarriage, the Senators allowed Craig to leave the Ottawa training camp for about a week to be with his wife.

After Craig had returned to the team, Nicholle discovered a swollen lymph node on her neck. That led to a biopsy that confirmed the lump was malignant.

A second growth was then discovered behind her nose in the upper portion of the neck and that led to the diagnosis of nasopharyngeal carcinoma. It is a rare form of cancer most common in Southeastern Asia. It is linked to the Epstein-Barr virus, although Nicholle had never had suffered from mononucleosis.

"I'd be lying if I said there wasn't dark moments," Nicholle said of hearing the terrifying news. "I tried to do positive things to keep my mind away from the dark. But I would get tears in my eyes all the time if I looked at my kids because I was like, 'I need to live, my kids need me.' That was the dark part I would get to.

"Not that I was scared to die, but I didn't want my kids to be without a mother. And then I would think, 'If I die, Craig would have to stop playing hockey, something he loves to do.'"

The NHL regular season was under way and Craig Anderson again left the team to be with his wife – but it was only for a couple of days as Andrew Hammond, one of the Ottawa backup goaltenders, got injured.

Anderson returned to the team at the urging of his wife, who insisted he could not leave his teammates shorthanded.

"I had been diagnosed [with cancer], but we hadn't even formulated a plan yet on treatment," she explained of her reasoning. "I said to him, 'Listen, your team doesn't have a goalie, just go back. It will be okay because I can't really do anything right now.'"

Anderson left the team on Oct. 27 and returned in time to play against Edmonton on Oct. 30. He made 37 saves in a 2-0 shutout win over the Oilers.

The difficult part of Nicholle's journey began on Nov. 30, when she underwent the first of 33 sessions of radiation and three of chemotherapy – first at facilities in New Jersey and New York, and finally closer to home in Florida.

Craig, who was granted another leave of absence over this rough spell, was at her side most of the way. He was away from the team for about two months, returning in early February, when he was pivotal in helping the Senators reach the Eastern Conference finals for the first time in a decade.

But his thoughts were never far from his wife.

"I used it [playing] as a relief," he said. "You know, people go to the gym and work out as their stress relief. That was my relief, to go to the rink and get into my bubble for the three hours and come back to reality when it was all over."

The Senators played the Pittsburgh Penguins in the Eastern Conference final and the playoff went the limit to a seventh game, on May 25. Anderson was in net for what was a thrilling 3-2 loss in double overtime.

Earlier in the day, his wife was in New York to see her cancer specialist, who told her cancer was in remission.

And the main concern she had was whether to inform Craig of the news, worried that it might affect his frame of mind heading into the biggest game of his career with a berth into the Stanley Cup final on the line.

"I didn't tell Craig first," she said. "I phoned my Mom and told her first. And I told her I might have to wait until after the game to tell Craig. And she told me I can't do that, that you can't keep that message from your husband. I was worried it might screw up his game. I was so scared."

She ended up telling him beforehand and she could almost feel his relief through the telephone line.

At the end of the season, Craig Anderson was rewarded with the NHL's Bill Masterton Memorial Trophy for his perseverance, sportsmanship and dedication to hockey in a season where his wife battled a deadly disease.

Nicholle Anderson was at his side, weeping tears of joy as he was handed the trophy.

"I have to keep believing"

Nicholle Anderson still hasn't been given a clean bill of health. That will only come after five years with no sign that the disease has returned, the generally accepted time frame the medical community considers many cancers "cured."

But in her mind, the healing has begun and she hopes, by being so public about her struggles with a deadly disease, she can make a difference.

"I hope I can," she said. "And I don't know what aspect that might be.

"Maybe, one day, someone finds a cure for cancer. I don't know if you're going to find a cure for all cancers, but there has to be answers. There's always an answer for something, right?"

Here, she pauses for a moment before continuing.

"So I have to keep believing," she adds, taking a cue from her favourite Journey song. 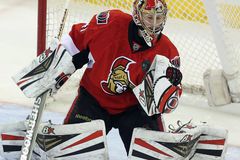 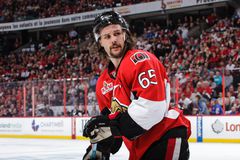 analysis
Senators have pain and wounds – but no regrets
May 26, 2017
Follow us on Twitter @globeandmail Opens in a new window
Report an error Editorial code of conduct
Due to technical reasons, we have temporarily removed commenting from our articles. We hope to have this fixed soon. Thank you for your patience. If you are looking to give feedback on our new site, please send it along to feedback@globeandmail.com. If you want to write a letter to the editor, please forward to letters@globeandmail.com.
Comments are closed