Marc Crawford should be sleeping better these days.

The former Vancouver Canucks head coach, who now works as a broadcaster for TSN, is no longer personally liable for any damages in Steve Moore's $38-million lawsuit against Todd Bertuzzi and the company that owns the Canucks. Bertuzzi dropped his third-party lawsuit against Crawford, who was his coach in March, 2004 when Bertuzzi ended Moore's NHL career with an attack that left him with broken vertebrae and a concussion.

Moore is suing Bertuzzi and the Canucks for $38-million in damages for the lost income from the premature end of his hockey career. Crawford is not named in the claim. That lawsuit is scheduled for trial in the Ontario Superior Court of Justice in either September or October. If Bertuzzi, 36, who currently plays for the Detroit Red Wings, is still an active player the lawsuit will go to trial on Sept. 24, before the NHL season starts. If he is retired, the trial will begin Oct. 22.

While Crawford was covered by the Canucks' insurance policy for damages in the lawsuit, he was still partially exposed because the policy has a limit of $10-million plus another $1-million for legal fees. If a court award exceeded those amounts, Crawford could have been held liable for a share of the damages.

Due to an exception in the Canucks' insurance policy for criminal acts, Bertuzzi is not covered and is personally liable for any damages. He pleaded guilty to assault and was sentenced to probation and community service.

The damages Moore is seeking could be more than the $38-million in his initial statement of claim. It is expected Moore's lawyers will argue at trial that his injuries also prevent him from enjoying the post-hockey career he expected, making the former player entitled to damages for lost income over his entire working life. Moore graduated from Harvard University with a degree in environmental sciences. His lawyers are expected to argue the brain damage he suffered from Bertuzzi's attack prevents him from taking up a lucrative career.

Bertuzzi attacked Moore, who was 26 at the time, on Mar. 8, 2004 during a game between the Canucks and the Colorado Avalanche. The attack was in retaliation for a hit Moore made on Canucks forward Markus Naslund in a previous game that left the Vancouver star injured.

In the third-party lawsuit against Crawford, Bertuzzi argued his former coach encouraged him to go after Moore as a result of the hit on Naslund. The suit contended that any damages against Bertuzzi should be paid by Crawford. The former coach said in his statement of defence that Bertuzzi disobeyed his order to come off the ice just before he jumped Moore.

While Crawford is off the hook, Moore's lawyer, Tim Danson, asked during a court hearing Wednesday if there was any agreement between the Canucks and Bertuzzi that the team would cover any damages awarded against Crawford.

Danson told Superior Court Master Ronald Dash that any such agreement would have a bearing on Moore's claim. It might result in Crawford working with Bertuzzi and the Canucks against Moore in the lawsuit.

Both Adair and the Canucks' lawyer said they would think about on their positions. Dash said they have until Jan. 23 to consider the question of whether or not there is an agreement with Bertuzzi and if so the agreement must be shown to him on that date.

Dash also ruled the Canucks must decide by Jan. 31 if they plan to proceed with a motion asking that the trial be heard only by a judge. The Canucks are thought to be considering the motion in the belief a lot of testimony is expected on complicated and technical matters that might be beyond the grasp of ordinary citizens.

Crosby's concussion troubles alter the state of the game
January 4, 2012 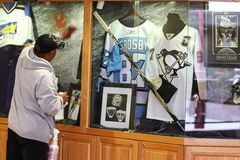