Every member of the Toronto Maple Leafs seemed to have a different answer, even as they talked about the same problem.

They agreed they're struggling defensively. They're giving up too much each night, in shots on goals and prime scoring chances. But some pointed to how they need to box out players in front of the net, or change how they battle for loose pucks, or even just maintain better cycles in the offensive zone.

Others argued that it didn't come down to any one thing.

"It's everything," defenceman Connor Carrick said. "You've got to get better at everything. That's what the league does. That's why it gets so tight as the year goes on. Coaches are really good in this league. Players are always trying to execute what they're talking about. It's a matter of implementing it as fast as possible."

The past week has felt like a step back in that department.

Twenty games into the season, the youngest team in the NHL has been slipping. After an 8-6-3 start, the Leafs have lost three in a row. A 53-per-cent possession team in their first 10 games, they've dipped to less than 50 in their past 10, the result of lopsided losses to teams such as Los Angeles and Pittsburgh.

While the Leafs have a very good tactical coach and a good system, they lack depth, make strange lineup decisions and are relying on 11 regulars (including seven rookies) who are 25 years old or younger.

They are a dominant offensive team that often gives it all back defensively.

"We do a lot of good things," coach Mike Babcock said on Friday afternoon, as his team prepared for Saturday's game against the Washington Capitals, the NHL's best team in the regular season last year. "We do lots of silly things. … We've gotten a lot better, but we've got a long way to go."

"It's mental mistakes," added Zach Hyman, one of the Leafs' older rookies. "Everybody knows what we should be doing. We go over it in practice all the time. You have to go out there and execute. It's only 20 games – we're a quarter of the way done – but we've got to start figuring it out."

The Leafs are currently generating the second-most scoring chances in the league but sit 26th in chances against. They're second last in shots against and third last in shot attempts against. They're undeniably fun to watch, but disjointed, unable to protect leads (i.e. their loss to the New Jersey Devils on Wednesday) or hang with tightly structured teams (i.e. their loss to the Carolina Hurricanes on Tuesday).

The silver lining here for Toronto is that many of the teams it is facing have had a much more cohesive lineup. The Kings and Penguins and others have had the benefit of a uniform roster – at some positions – for years.

The Leafs? At least two-thirds of the roster hasn't been around for even a season and a half.

They have a different coach, different goalies, different weapons on offence and different pairings on defence. They're all trying to come together and turn what was a last-place team a year ago into a playoff contender, and that's not a leap – of 25-plus points – many NHL clubs have made.

What the Leafs have been is much better than last season, even though many of them are still figuring out the league, their teammates and their system on the fly.

In some cases, they're making the jump from junior (Mitch Marner), from Switzerland or Russia (Auston Matthews and Nikita Zaitsev) and the AHL (Carrick, William Nylander and others), learning what will work and what won't now that the competition is at a higher level.

Most agree what they're facing, from teams such as Carolina, is a more impenetrable network of bodies, sticks and skates than they've ever dealt with.

"It's the best league in the world," Matthews said, when asked about the difference in speed and tenacity he has witnessed from checkers.

"The systems are similar to what teams play in the [AHL], but the execution and detail is a lot better here," added Connor Brown, who again earned praise from Babcock for his defensive play on Friday. "There's always guys above you. In the neutral zone, you don't get much room to carry it though. There's guys swinging with you and slowing you down. In the [AHL], you can pick up some speed and skate it through. Sometimes."

The Leafs sense they're making progress, but one issue is other teams are, too. They're scouting the Leafs weaknesses and exploiting them. Toronto's players, meanwhile, know the statistics about how hard it is to get back into the playoff race if you're out of the picture at U.S. Thanksgiving and realize they have to start picking up more points.

The big question is whether they figure out how to play in this league quickly enough to make this season more memorable than the 20th- to 25th-place finish they're currently headed for. 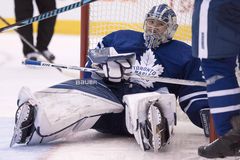 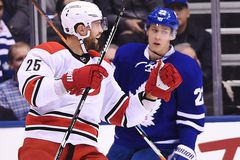 Price stops 31 shots as Canadiens beat Leafs 2-1
November 19, 2016
Follow James Mirtle on Twitter @mirtle
Report an error Editorial code of conduct
Due to technical reasons, we have temporarily removed commenting from our articles. We hope to have this fixed soon. Thank you for your patience. If you are looking to give feedback on our new site, please send it along to feedback@globeandmail.com. If you want to write a letter to the editor, please forward to letters@globeandmail.com.
Comments