When John Tortorella arrived in Vancouver last summer, his hiring here by the brainy Mike Gillis seemed a jarring fit to many hockey types. People extrapolated about Tortorella from a couple paint strokes of the coach's career, defensive-minded, the shot-blocking ethos. And the temper, of course the temper.

Tortorella was not the type of guy who would embrace hockey analytics, the thinking went. But in Vancouver, led by president/general manager Gillis, the club has embraced any advantage a team can grab, and "puck possession" and "scoring chances" are part of the way the Canucks think about hockey. So when Tortorella was hired, after his jarring ejection from New York, the coach embraced an old-dog-new-tricks stance, claiming he didn't know much about analytics but was eager to learn.

This weekend featured both Tortorellas. Sunday night, there was the old Tortorella, the 55-year-old behind the bench in the second period against the Dallas Stars, a game the unlucky Canucks would go on to lose 2-1. It was Vancouver's fourth-consecutive loss, more firmly lodging the team in ninth place in the Western Conference, out of the playoff picture.

In the second, you could almost see the billows of smoke firing from Tortorella's ears, as he vocalized his displeasure and stewed over a disallowed Henrik Sedin goal. The power-play score that would have tied the game at one had been waved off by the refs, citing Daniel Sedin's interference with Stars goaltender Kari Lehtonen. The contact between the two was mostly imagined and fractional at best. Maybe it was a one-day-late birthday present to the Finnish goaltender, who turned 30 on Saturday.

The twins were relatively even-tempered, as they almost always are, but Daniel called the phantom interference "the wrong call," and Henrik, after saying he wouldn't talk about it, described it as "made-up call." Even Tortorella maintained composure, only saying calls such as the disallowed goal should go to replay.

All three know one call does not make a game, and a loss is a loss.

"We're out of the playoffs," said Daniel after the game. Daniel alone had 10 shots on goal. "We've got to start winning."

Then there was the other side of Tortorella, one with a more professorial mien, discussing the Canucks struggles to convert offensive pressure into goals. He did not yet know what was to unfold Sunday night, speaking on Saturday midday after practice ahead of the Stars game. Tortorella was asked about his team's recent losing skid, despite driving play.

"I know it's a story and I don't want to overthink it," he said. "I'm really happy about our puck possession – and I believe the offence will come."

The idea is puck possession – measured by all shots taken, compared with all shots attempted against – will lead to goals, and wins. It didn't work for Vancouver last Sunday, in Anaheim, a 3-1 loss, or back at home on Thursday against San Jose, a 2-1 loss in overtime, credited in part by Sharks coach Todd McLellan to the hockey gods.

Vancouver was looking pretty unlucky – never mind the bad call in the second on the disallowed goal – against the Stars, too. Through two periods, the Canucks absolutely dominated the contest at Rogers Arena. In the second, the Stars barely managed a scoring opportunity. But with 20 minutes left in regulation, it was the Stars up 1-0 – even as the Canucks had put 61 pucks towards Lehtonen, while Roberto Luongo faced less than half that action, 24 shots attempted.

So it was perhaps the spite of the hockey gods when Dallas scored early in the third, to go up 2-0, Vancouver defenceman Ryan Stanton slamming his stick on the end boards in frustration. The Canucks responded quickly, a rare power play goal by Vancouver, appropriately scored by Henrik Sedin. Then, as it mattered most, all that puck-possession push soften. The Canucks struggled to put pucks at Lehtonen through much of the third, almost like the team was suddenly dispirited by their lack of puck luck.

The night ended with the Canucks putting 83 pucks at Lehtonen, and the Stars sending 42 Luongo's way. Ryan Kesler, who had five shots on goal, and 10 shots attempted in total, said the refrain of puck possession and goals-will-come grow tired.

The puck-possession Tortorella, the one who believes the goals will come, is still waiting. While he waits, the Canucks sit ninth in the Western Conference, at 11-8-3 (just one point up on the rising Stars).

The thing is, the Canucks can score goals. When Vancouver has managed two or more this season, the team is nearly perfect: 11-0-2. But when Vancouver scores one, as against Dallas, the team is 0-8-1. And scoring one goal in almost half the games played is a pretty much a guaranteed road to mediocrity, puck possession or not.

And sometimes it appears the Canucks are their own enemy. The Sedins twice in the first period had good looks to score – but botched them both. The first chance saw Henrik on a breakaway off a pass from his brother in the neutral zone but Henrik was about as effective as he is in the shootout and politely placed the puck in Lehtonen's chest. Not much later, the Sedins were on a two-on-one, Henrik with the puck, but instead of a shot, perhaps haunted by the previous flub, Henrik went for an elaborate spinning no-look backhand pass to Daniel, which failed completely and was scooped up by the Stars.

Sunday night was the first time this season that the Canucks have had all of their top nine forwards healthy and populating their top three lines. But at the final buzzer, it made little difference. The Canucks played well. The Canucks lost.

"Some guys are a little snakebitten," said Tortorella on Saturday, "but hopefully that'll break." He pointed to 20 "scoring chances" against San Jose, a punch that produced just the one goal. It should, generally, generate more. But it didn't. And it hasn't. Tortorella will have to, as Vigneault might have said, trust the process. "I believe" – to again highlight Tortorella's words on Saturday – "the offence will come." 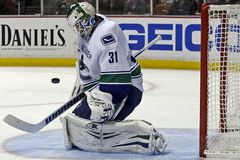 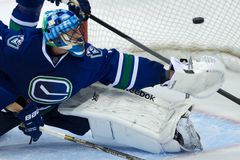 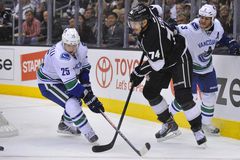