In the famous photograph, the Leafs jig.

We can laugh, easy for us, but this is serious business, as it always is for Toronto's hockey team this time of year, the season for the earnest, eternal calisthenics of trying to figure out how to get back into the playoffs. If that requires legendary Leafs with names such as Day and Bailey to caper in full hockey garb when their skates and sticks are back home, a couple of hours away – who are we, really, to scorn that?

The year was 1928, and for the Leafs then it was the old story that's still so familiar: in the spring, they'd missed the postseason again. In the year since Conn Smythe had become one of the team's owners as well as manager and coach, they'd switched names (St. Patricks to Maple Leafs) and colours (green for blue). On the ice, injuries dogged the team's season and despite a spirited March, the Leafs didn't qualify to play for the Stanley Cup in April.

Smythe spent the summer retooling. That and running his sand and gravel business. On the non-aggregate side, he sent Butch Keeling to the New York Rangers for $10,000 and winger Alex Gray. To the defence he added Jack Arbour's seasoned weight. He recruited junior stars Shorty Horne (a "clever and tricky" stickhandler) and tall Andy Blair, who reminded some of a young Hooley Smith.

There was worry that August that he'd have to retire: in February, an errant skate had nearly severed his Achilles tendon. A heavy loss it would have been: Day was a dominant defenceman, and durable – Frank Selke said that because he didn't smoke or drink or touch tea, coffee, or chocolate, he could play 60 minutes a game. He toiled hard over the summer, in the office at C. Smythe Ltd. by day, skating every evening at Ravina rink. By September, he was ready to go.

The chill in the air started to shift the city's thoughts to hockey, or vice versa. Smythe mailed out contracts to his players. Players drifted back into town. For defenceman Art Smith, it had been a summer to forget: in August, thieves hoisted 20 tires worth $400 from his downtown store – though they didn't touch the cash register, or a shipment of new inner tubes.

Star centre/itinerant dentist Dr. Bill Carson returned from Northern Ontario where, conducting "an all-summer motor car dental clinic" for the Ontario government, he'd peered into 1,000 mouths from Sudbury to Rainy River. Horne had been up that way, too, prospecting: he showed up "bronzed as brown as a berry."

Baseball teams had long been heading south for their preseason preparations. Hockey was different: gearing up in 1927, the Leafs had ambled out of Arena Gardens on Mutual Street down to the Don Valley's river flats for relay races and soccer. Smythe's new conditioning plan involved leaving the ice even farther behind: he was shipping the boys out of town for two weeks, to the popular Lake Huron summer-resort town of Port Elgin, Ont.

Call it what you want – Toronto newspapers tried both "sojourn" and "stiff outdoor training grind" – on a Sunday afternoon in mid-October, Smythe and his 12-man roster got under way. Packing golf clubs and softball bats – "about everything but hockey skates and sticks" – they boarded their "special bus" and set off. The Globe reported that "the trip was expected to be a most interesting one" – there was a "radio set" aboard.

Port Elgin turned out en masse with a welcome. The team barely had time to check in at the Lakeview Inn before dinner that night, a big do with all the town's leading (male) businessmen in attendance. The fuss was a surprise – though "all the more delightful on that account."

Monday morning, Corporal Joe Coyne took command. In the photograph, he's the jigmaster at the fore, borrowed by Smythe from the Royal Canadian Regiment for the duration of camp. An expert in physical training and "the good old military style," he had the players out at 7:15 each morning. I don't know about you; even in profile, 86 years later, he doesn't look to me like anyone you'd want to mess with.

Horne's physique was the talk of the camp. Primeau looked … "sturdier." Monday the players started with what The Globe described as "a series of physical 'jerks.' " These reminded old soldiers in the squad [Art Duncan and Arbour were two] of their army days." Everyone but Duncan complained of aches and bruises.

Later, there was doubles tennis. Next up, quoits – tossing rubber rings, like horseshoes – where Arbour and Danny Cox prevailed. Afternoons the Leafs had the freedom of the Port Elgin-Southampton golf course. The fishing was great: in a photograph from that first week, players show off the lake trout they've snagged as if they augured silverware to come.

Saturday, Oct. 27 was the toughest day. Cpl. Coyne danced the players hard, after which they took a long walk, followed by a two-mile run. In the afternoon, softball: they beat the Perkins Mud Hens 4-3, with Primeau singling in the winning run. (Coyne and Rev. Gallagher from the United Church umpired.) The bad news: Day wrenched an ankle running bases, the bad one, and had to ease up for the rest of the week.

Sunday, Andy Blair arrived, just as Dr. Carson departed – he had a hunting trip in Parry Sound to squeeze in before hockey season got going.

Monday the 29th: snow. Day was able to lead the team on a walk, as usual, followed by physical drill in the hotel rotunda. The lake was all a chop, and a planned fishing trip was nixed. Instead: "All afternoon the boys sat around the box stove telling yarns of former years and chaffing at the bit in hopes of better weather in the morning."

They were having a ball. Locals feted them at a dance. It would be hard to leave. The hotel had a "home-like atmosphere" that "built up a spirit of comradeship that will be apparent to everyone when the club returns to Toronto for ice practice."

There was a quiet confidence in the camp. The Star, at least, discerned it: "Compared to some of the boastful statements of former years one hears only the oft repeated remark that each player is prepared to give his last ounce of energy putting the 1928-29 Leafs back where a Toronto team belongs, 'on top.'"

The last Wednesday was Halloween, so there was a party, with "many pranks." Before leaving town, Andy Blair teamed up with boss Smythe to seize the team golfing crown. They took the train, heading home.

Nearly 1,000 fans were on hand at Arena Gardens to see the Leafs skate and scrimmage the first weekend in November. They were back at it every day after that, over the noon hour, with practices open to the lunching public.

When the season opened on Nov. 15, the Leafs looked good, winning 2-0 at home to Chicago. They did make the playoffs in the spring, and even managed a first-round win over the Detroit Cougars. That's as far as it went: the New York Rangers stopped them in the semi-finals, and it was all over just like that, until the fall, when the time would come once more to catch the special bus to Port Elgin. 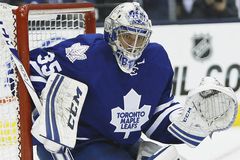 Galchenyuk scores in OT as Habs down Avalanche in preseason action
September 25, 2014 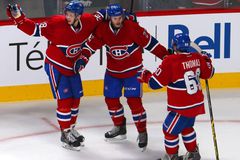 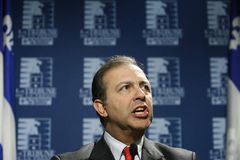 'Miller Time' is over in Buffalo, leaving Sabres starting fresh in net with Enroth, Neuvirth
September 25, 2014 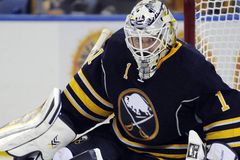 Avalanche coach Patrick Roy not worried about an encore
September 25, 2014 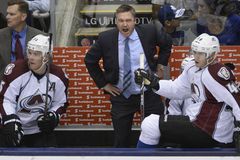