There is an argument for North American professional sports leagues spreading their footprint across the world, but it only concerns how they should, not if they should.

Calgary Flames president Brian Burke, for example, claimed it is only a question of time before the NHL expands to Europe, placing teams in larger cities such as Prague or Cologne.

However, veteran international hockey executive Szymon Szemberg, former chief operating officer of the European-based Champions Hockey League, said travel and economic problems rule out European expansion for the NHL, and it should concentrate on building its profile by taking part in the Champions League as well as playing exhibitions against European teams.

And Kevin Abrams, assistant general manager of the New York Giants, sided with Szemberg, at least where the National Football League is concerned.

The three men, along with former Toronto Maple Leafs player Rick Vaive, debated the issues in a panel discussion Monday at the annual Prime Time Sports Management Conference in Toronto, which is organized by Burke and Toronto lawyer Trevor Whiffen.

Szemberg argued there will never be enough arenas in European cities with the seating capacity and luxury suites to generate enough revenue to support NHL teams.

Burke said he could see the day when there will be European-based NHL teams. "I don't think it's imminent, because buildings in Europe don't generate NHL economics," he said. "Until you have buildings that can match or exceed NHL economics, why would you play there? But I think it will happen."

But Szemberg argued that there never be enough arenas built in Europe with the capacity to support an NHL team, and that overseas travel rules out regular games between teams that are up to nine time-zones apart on different continents.

"You can't make the world smaller," Szemberg said. "I am confident the NHL will own teams or have leagues in Europe, but I don't think you will ever have NHL teams in Europe that compete for the Stanley Cup. How can you have a team in Los Angeles compete with one in Germany?"

Burke disagreed with that, too. He said for teams such as his Flames, "our travel is brutal now." He said the Flames are in the midst of a six-game Eastern swing that started Nov. 5 and is taking them from Philadelphia to Florida to Washington. If it is properly managed, he said, a European road trip would not be any worse.

"We do more mileage than a team going to Europe [on the current trip]," he said. "I don't think it's logistically impossible, especially as aircraft get bigger. You have a Dreamliner now where you can have bunks so the players could sleep.

"You could go over and play those teams twice. We do home-and-home [games] all the time in our league. You could go play in Cologne, then Paris, back to Cologne and then Paris."

There is a theory among hockey people that European fans are not accustomed to paying NHL ticket prices and would resist a large increase. But Burke said the NHL "could cover that loss at the gate with television revenue."

Abrams said he expected the NFL will continue its overseas marketing efforts, in which at least one regular-season game per season is played in London, but he does not believe the league will ever expand to Europe.

"I don't know that there are logistics for a franchise based in Europe yet," he said. "It's a tougher sport for long road trips. We have six days between [most] games."

Szemberg said the NHL would be better off adopting the soccer model, which sees major European professional teams play exhibitions in North America during their off-seasons and enter the Champions League competition, which is a big attraction for fans. He pointed out that Manchester United built itself into franchise worth $3.3-billion (U.S.) brand with that approach.

However, both Burke and Vaive see problems with that approach.

"After two months of playoffs, why go over there and play?" Vaive said. "With an 82-game [NHL] schedule, talking about going there in the off-season is too much for [the players]. If the [NHL] schedule is reduced, there might be some way for players to go play in European cities."

Burke pointed out the hockey version of the Champions League tournament is far less established; it is in its second season, and runs from September through January. It includes teams from all of the major European leagues except one – the Kontinental Hockey League, which is generally acknowledged to be second in quality to the NHL.

Szemberg admitted the attendance and revenues from the Champions Hockey League are modest, but it should be allowed another "five to 10 years to develop." 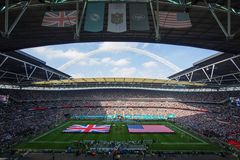