Watching helpless Ottawa Senators rookie David Dziurzynski lying unconscious on the ice Wednesday after being knocked out in a fight with Frazer McLaren of Toronto, we wondered what words announcers would find to tell their viewers that a hockey player has been killed as a result of a fight.

"Tough news, fans," they might intone. "The Giants will have to play a forward short for the rest of the night. Big Bobby Clobber is no more. What a competitor. Died doing what he loved. I'm sure I join with you in sending our condolences. Hey, don't miss our intermission when the panel will show highlights of the fight about 50 times. But with sad faces."

As bad as Dziurzynski's KO looked, TSN's Gord Miller and Ray Ferraro did not have the sad duty of reporting a fatality Wednesday night as the dazed player was dragged from the ice like a side of beef ready for the abattoir. (Dziurzynski suffered a concussion.)

"Frazer McLaren got him hard there," Miller said dispassionately.

Miller added that it was three games since Toronto's last fight, its longest gap in the season.

Ferraro continued, "The concern of course is with Dziurzynski," said the former NHLer. "Always disturbing to see a player like that. Whether you agree with [fighting] or not. You just hope for the best."

The Dziurzynski/McLaren fight was particularly pointless, just 26 seconds into the game. But judging by the Go Leafs Go chant from Toronto fans at the Air Canada Centre, a large segment of hockey fans sees the sport like bull fighting. Play with the bull and you get the horn. Turn the page.

So the NHL's TV partners have that going for them.

Judged on passion alone, Montreal may have the best sports fans in the country. Yet the city's English language all-sports radio outlet, TSN Radio 690, may disappear this year.

As a result of the purchase of Astral Media Inc. by BCE Inc. (owners of TSN 690) Bell will now own four English language radio stations in Montreal (TSN 690, CHOM-FM, CJFM-FM and CJAD). In the pretzel logic of the Canadian Radio-Television and Telecommunications Commission, no company can own more than three English stations in the market, however.

And so Bell is launching an online petition to be allowed to keep the all-sports voice of the Montreal Canadiens and Impact.

This is the second time at death's door for TSN 690. Last summer, when BCE's first attempt to purchase Astral was announced, the all-sports format was going to be replaced by a French-language version on the 690 signal. Then the CRTC turned down BCE's acquisition of Astral, and the station went into a holding pattern. BCE's current proposal calls for a seven-year guarantee for the station (coincidental with its contract for Habs radio rights), no French language station alternative and a scholarship fund for Concordia University and amateur sports.

"It's been a character builder since last summer," says program director Wayne Bews, who's been with the all-sports station since it started in May of 2001. "The staff has been great. We stayed on the air, worked through the lockout, and now we're seeing good results with the Canadiens back on the ice. We're just happy that this time there's some hope to continue."

Bews points to a previous appeal by Cogeco that allowed the company to own three FM stations in the Montreal market. While TSN 690 is hardly the AM market leader, he contends, there is a market to serve of about one million English language listeners with a possible million more crossover listeners from a signal that stretches into eastern Ontario, northern New England and into the Laurentians. 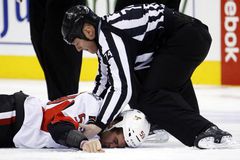 Does fighting belong in hockey? Majority of Globe readers say no
June 19, 2017
Players today understand the risks involved when they engage in a fight
May 11, 2018 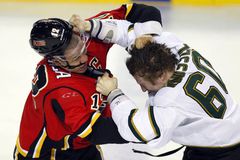