Nearly 18 million people were watching on TV when the Canadian women's hockey team rallied from a two-goal, third-period deficit to beat the United States 3-2 in overtime to win Olympic gold in 2014.

A few thousand fans are expected to show up when the Canadians play the Americans at USA Hockey Arena in suburban Detroit on Saturday in the first Team USA Winter Champions Series, resuming one of the best rivalries on ice, and many more will be tuned in on NBCSN. The two teams will meet again Monday night in Sarnia, Ont., wrapping up a home-and-home set of friendlies that will likely stoke the flames of an emotionally charged series.

"It's women's hockey at its finest," said Megan Bozek, who plays defence for the U.S. "Expect blood, sweat and tears put into every shift, every period, until the last puck drops. … The heart, the passion, the grit that we play with, and that Canada plays with, it's the best 60 minutes of hockey that you'll see in women's hockey."

Even though the stakes will be low for the national teams, the intensity is expected to be high as extremely competitive athletes hope to help their country win while doing enough to earn a spot on the team for the 2017 International Ice Hockey Federation world championship – taking place in the same venue this spring – and the Olympics in 2018.

And unlike NHL players, everyone knows the best female hockey players will be going for gold in South Korea in about 14 months. Canada and the U.S., though, are helmets and shoulder pads above the rest of the world.

The Canadians have won four-straight Olympic golds, beating the Americans in three of those finals. The U.S. beat Canada in 1998 when women's ice hockey became an Olympic sport. Only Sweden has also finished among the top two at the Olympics, earning silver in 2006. The rest of the field has had to settle for bronze.

Since the first IIHF women's world championships in 1990, the Canadians and Americans have not allowed another country to advance to the finals. The U.S. beat Canada earlier this year at the world championships, winning the eight-nation tournament for the third-straight time over Canada and sixth time in seven opportunities.

"We take that seriously and it still hurts," Canadian forward Haley Irwin acknowledged. "It's a great time of year for us to play them again in a way we haven't in the past. It's a great opportunity to see where we're at."

USA Hockey believes it is set up for continued success, including at the Olympics where it will desperately seek an elusive gold medal. Since losing a heartbreaker in Russia, the Americans have won seven of 10 closely contested games against Canada at five international events. With a deep and talented pool of players, USA Hockey invited 37 prospects to it training camp this week and a vast majority of them have already finished their college careers.

And it's not a leap to say these women are truly doing it for the love of the game: None of them are, or will, get rich by playing hockey. The most an American or Canadian woman can make, in fledgling pro hockey leagues and with financial support from USA Hockey or Canada's Athlete Assistance Program, is about $35,000 (U.S.).

"All of us are making a sacrifice and we realize that," said Anne Schleper, who plays defence for the Americans and for the Buffalo Beauts in the National Women's Hockey League. "Women's hockey has come a long way, but it still has a long way to go."

With a little more than a year to go before the 2018 Olympics, the games Saturday and Monday will provide a preview of the Pyeongchang Games because about half of the women who participated in the dramatic gold medal game in Sochi will be on the ice.

The two teams never just show up and go through the motions when they're on the ice together, either.

"This rivalry transcends not just women's hockey or women's sports, but sports in general," Carey said. "Whatever rivalry you can think of, magnify that, because that's what it's going to look like. This rivalry has been happening since the early 1990s and every game is a battle. 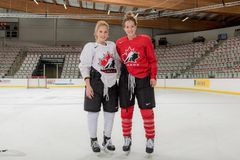 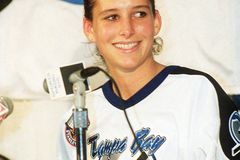 Shannon Szabados returns to Canadian women’s hockey team
November 23, 2016
Report an error
Due to technical reasons, we have temporarily removed commenting from our articles. We hope to have this fixed soon. Thank you for your patience. If you are looking to give feedback on our new site, please send it along to feedback@globeandmail.com. If you want to write a letter to the editor, please forward to letters@globeandmail.com.
Comments