The memory of Sochi fuelled the United States as they fought off Canada 7-5 to win the women's world hockey championship Saturday.

Tournament MVP Hilary Knight was one of 13 players on the U.S. team who experienced heartbreak in last year's Olympic final in Sochi, Russia. They led 2-0 with four minutes to go, but Canada tied the game and took the gold in overtime.

So when the Canadians came back from a three-goal deficit Saturday to tie the game 5-5 heading into the third, the U.S. did not let world championship gold slip away.

"Huge motivator," Knight said. "We had the hump on our back, the monkey on our back from Sochi and that didn't feel good. We came out with a win and it feels really good."

Canada may have won the last four Olympic gold medals, but the Americans have now taken five of the last six world championships. They defended the title they won in Ottawa in 2013.

The U.S. and Canada have met in all 16 world finals with this year's the highest scoring. Canada won the first eight, but the U.S. has now beaten them in six of the last eight.

"We haven't been as successful in the world championships," Canadian head coach Dough Derraugh acknowledged. "It's definitely something we'll have to look at and plan better and figure out what is causing us to get behind the U.S. in these events."

Brianna Decker scored the winner at 11:42 of the third period with Kendall Coyne adding a power-play insurance marker at 13:18.

The U.S. went undefeated through the tournament and scored three power-play goals in the final. They were lethal with an extra attacker throughout the tournament with a 44 per cent success rate.

Rebecca Johnston of Sudbury, Ont., countered for Canada with a pair of goals.

Montreal's Ouellette, Marie-Philip Poulin of Beauceville, Que., and Brigette Lacquette of Mallard, Man., also scored in front of an announced 1,533 at Malmo Isstadion.

Canadian starter Anne-Renee Desbiens of La Malbaie, Que., was replaced after one period by Genevieve Lacasse after stopping 16 of 20. Lacasse, from Kingston, Ont., turned away 13 of 16.

Jessie Vetter of the U.S. was pulled after Canada's fourth goal at 11:41 of the second period, but earned the win as the U.S. led 5-4 when she was replaced. Reliever Alex Rigsby gave up one goal on 14 shots.

Both countries came to Malmo with 10 players in their respective lineup who hadn't played in a world championship before.

Canada's roster had 11 players who participated in the Olympic final, but this was the youngest Canadian team ever at a world championship with an average age of 23.

It was another bucking-bronco of a women's hockey final between the two countries with both starting goalies pulled during the game and a major momentum swing during the first 40 minutes.

But Canada's defence couldn't handle the speed Coyne, Knight and Decker, as the Americans' top line scored the winner off the rush. Coyne was allowed to circle unchecked from behind the net to the to the high slot and score the insurance goal with a wrist shot.

The U.S. swarmed the offensive zone off the opening faceoff and scored two of three goals in the first 10 minutes on the power play. The Americans led 4-2 and outshot Canada 20-7 in the opening period.

They added another goal early in the second before Canada roared back with Lacquette, Johnston and Ouellette scoring in a span of two minutes six seconds starting at 10:03.

"We had to start better today," Ouellette said. "We never gave up. We fought until the end. We were able to come back and make it 5-5. For that, I'm so proud of my teammates, but it's not enough to win."

Finland beat Russia 4-1 for the bronze medal. Canada opened the tournament with a 4-2 loss to the U.S. in their pool.

Knight was named to the media all-star team along with Decker and U.S. defenceman Monique Lamoureux. Canadian forward Natalie Spooner was chosen an all-star as were Finland goaltender Meeri Raisanen and defender Jenni Hiirikoski.

Total attendance for the tournament was 15,532 for an average of 739 per game. The 2016 women's world championship will be held in Kamloops, B.C. 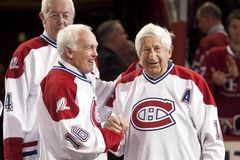 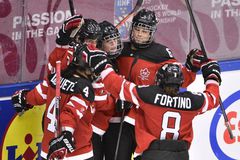 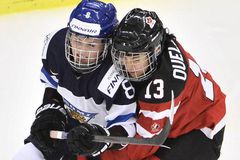