Members of the U.S. women's national hockey team didn't flinch on Thursday when USA Hockey gave them a deadline to commit to playing in the coming world championship.

The women stood together as one and allowed USA Hockey's 5 p.m. ET deadline to pass. The players, who are being represented pro bono by a Philadelphia law firm, say they won't play, citing more than a year of stalled negotiations with USA Hockey to secure fair wages and support.

The biggest event of the year on the women's hockey calendar is set for March 31 to April 7 in Plymouth, Mich., but the reigning champs say they won't show unless there is progress in the discussions with the U.S. governing body. USA Hockey has said it still intends to assemble a competitive team for the tournament.

"We've communicated with all the groups who they might possibly get to replace us – women who play in the world university games, those from our U-18 team, the U-22 and the National Women's Hockey League," said U.S. star Jocelyne Lamoureux-Davidson, a two-time Olympic silver medalist with Team USA and a five-time champion. "They all have expressed a lot of support for us. I don't think many young women are going to want to play for that team, not ones who dream of a future with Team USA. How do you think that would set up a young player to be accepted by the team?"

The American women have won gold in six of the past eight world championship and won a medal in every Olympics. They are seeking a contract with USA Hockey that includes fair compensation, because USA Hockey expects them to train year-round, but pays them "virtually nothing" outside of a six-month residency period leading up to the Olympics, during which the players are paid $1,000 (all currency U.S.) a month.

"Half of us have second and third jobs, we train year-round and we have to be prepared to fly off to a national team camp every six to eight weeks and be in elite shape when we get there, so we miss time from work and we lose those wages," Lamoureux-Davidson said.

"We are not looking to become millionaires here. We just want minimal compensation that's fair."

The players threatened on Wednesday that they would boycott the tournament, and then USA Hockey countered with a statement saying that in the lead-up to an Olympics, the governing body offers "a six-month training camp, additional support stipends and incentives for medals that could result in each player receiving nearly $85,000 in cash over the Olympic training and performance period. The sum is in addition to a housing allowance, travel allowances, meal expenses, medical and disability insurance and the infrastructure that includes elite-level support staff to train and prepare the players."

The players called that list misleading, especially the $85,000 amount, which they say is largely predicated on winning Olympic gold. Further, much of that money would come from the U.S Olympic Committee.

The players also argue that USA Hockey spends some $3.5-million annually and schedules 60 games a season for the boys in its National Team Development Program, yet no comparable development opportunity exists for girls, and the women's national team plays just nine games in non-Olympic years. They say they get inequitable support for equipment, staff, meals, travel expenses, transportation and publicity.

Tweets of support for the women have come from all over – tennis legend Billie Jean King, players from the U.S. women's soccer team, women's college hockey programs, the NWHL, U.S Olympians from the Washington Capitals and some U.S. senators.

"What it comes down to is that USA Hockey is unwilling to talk about that time period outside the six-month pre-Olympic training period," said Dee Spagnuolo, a lawyer representing the players from the firm Ballard Spahr LLP.

USA Hockey did not return The Globe and Mail's requests for reaction on Thursday.

"It's hard to make progress when we haven't received a call from USA Hockey," Lamoureux-Davidson said. "We remain optimistic that we can still talk. We are supposed to start training camp on Tuesday, but right now none of us intend to be there." 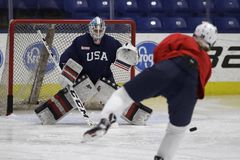